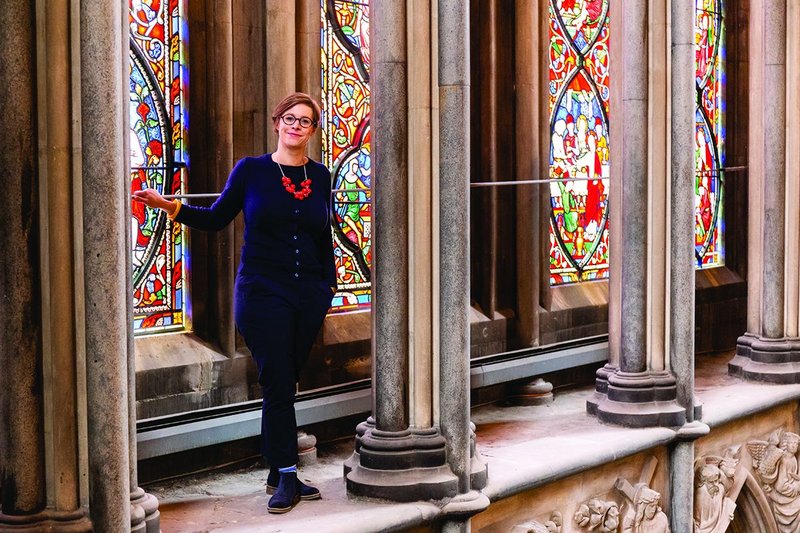 Camilla Finlay at Worcester Cathedral’s east window. As surveyor to the fabric she has the keys and codes for the hidden spaces. Credit: Paul Ligas

Under the vigorous fingers of Camilla Finlay, conservation architect and surveyor to the fabric at Worcester Cathedral, stone is crumbling into sand. There are whole chunks coming off. I haven’t seen so much deliberate destruction since a tower block demolition in the nineties. She speaks with equal energy. There are 42 cathedrals in England. Finlay, age 42, looks after two of them, this and Exeter. She is unusually young and female for a cathedral architect – her hero Jane Kennedy of Purcell was one of the first (RIBAJ March 2014) – part of a new generation who think beyond the technical and more comfortably draw together conservation and new build.

Finlay had an unorthodox route into this bastion of conservation. She tried  to avoid the architecture that ran in the family by aiming for the air force and learning to fly before she could drive, and then worked closely with Terry Farrell on big ideas for place before returning to the family firm in Banbury, Oxfordshire with her architect husband and young family. Newly conservation accredited, she applied to be cathedral architect at Exeter. And got it.

You can feel she loves Exeter Cathedral from its Roman ground to the grotesquery of medieval bosses and misericord carvings.  Her enthusiasm is contagious; our tour gathers cathedral visitors as we go. Worcester she treasures for its ancient monastic origins and beautifully botched measurements of the chantry chapel housing the tomb of Henry VIII’s older brother Prince Arthur.

In both it is the substance of stone that draws her hands, the drip-dreared faces in a side chapel, the rubbly mortared vaults of the undercroft, the mason’s marks both medieval and Victorian, the smooth weathering profile of our time holding fast over ancient, friable stress-cracked stones. She revels in work with the stonemasons of each cathedral, discussing whether to keep or replace every single stone, securing different stone from different quarries, drawing up the west face of Exeter stone by stone, period by period.

Perhaps it was visiting all those churches as a kid (‘two before the beach’). Or every church in Venice, Finlay reports. Her parents ran Acanthus Clews together as two of the six directors. Her father Michael Clews looked after Coventry and Llandaff cathedrals while her mother, Heather Clews, designed social and cultural projects. Years of her father’s quinquennial inspections built the relationships that secured Warwick Hall in Burford in the Cotswolds for the practice to be beautifully delivered by Finlay’s ex-Mather husband David. 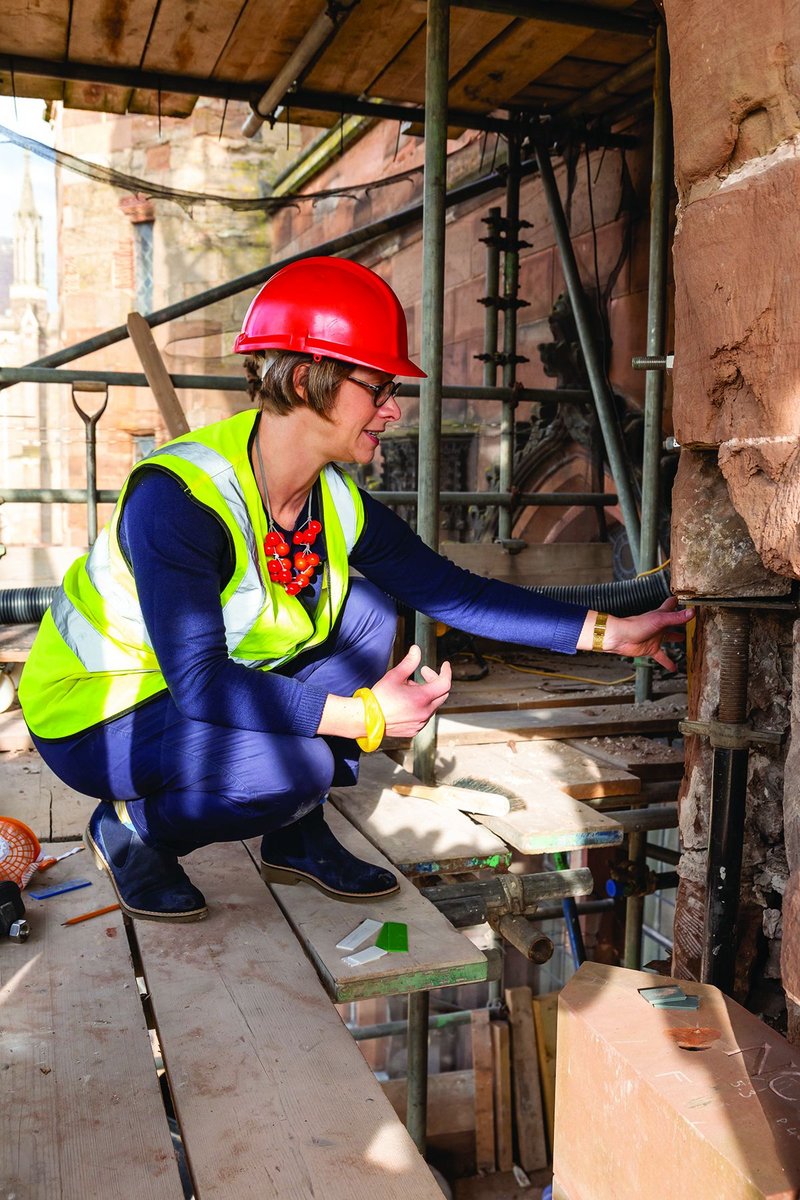 Many of Finlay’s interventions are invisible, belying the cost, time and skill put into them

Finlay’s own work is less visible. Time and again she points to a significant piece and says, quite happily, ‘but you wouldn’t notice’: the west window at Worcester with new stone tracery replacing the profiles that cupped the water; the holy faces on the west windows repainted on fragments of new glass and fixed over the top of the Victorian glass (neatly reversible); the removal of a failing postwar concrete roof; the stabilisation of Exeter’s medieval pulpitum (screen) that had been chopped up by George Gilbert Scott (Finlay’s first major project at Exeter). All these are invisible, belying the cost, time and skill put into them.

Innovation comes with a wariness of the deleterious fixes of earlier generations. If mesh dulls the stained glass can it be dispensed with in favour of CCTV? Or could a specially framed, slimmer, finer mesh be used where trees and balls pose problems – a trial in the yard, throwing stones at it, and a year installed on one window will test it. Sensors around the cathedrals feed back thousands of readings on temperature and humidity to check conditions and help model new solutions. It may be simple building physics to vent the void between secondary glass and historic stained glass to manipulate where the condensation lies but it takes coordination and sensitive judgements – which piece of leaded glass can be angled to give a top vent?

With Finlay leading you the work and its technical challenges come alive as part of the history, the future and the whole story of the cathedral. A major project, just granted Heritage Lottery Funding, is making the vaulted undercroft of Worcester habitable as teaching space. ‘It is so important,’ she says, fervently. But why? ‘This is the real fabric of the cathedral – it predates the cathedral. And unlike its awe-inspiring grandeur you can connect with the space here. And heat it and teach in it. It is part of the factory of living of the cathedral. Lots of people struggle to cross the threshold of places of worship, even when they are invited, so it is important to have different types of spaces, for arts, heritage, worship and peace.’ And yes, finding another space to store the chairs is part of the job too.

‘As an architect it is a chance to be part of the story, part of the family,’ says Finlay. One drawing of Exeter has the architects’ names alongside stones of different period, hers alongside a replacement finial. Other elements to add to the drawing are the new curved corbel stones hidden up on the roof, commemorating local rugby team Exeter Chiefs, the WWI centenary repair funding with a poppy and the eagle owl that found a home on the scaffold. With such complex buildings it is hard to look beyond immediate repairs to the fabric of the cathedral itself but the environs are often studded with scheduled monuments. On Worcester’s gatehouse, the Edgar Tower – where stone crumbles copiously – demonstrates the problem. A 1927 architect’s letter to the Dean shows how easy it is to choose the cheaper option: £1,000 of repair work to avoid ‘imminent collapse’ of the decaying stone is set against ‘temporary security’ at £150. The Dean went for the latter. The project to repair the tower now is £500,000. Being part of the family brings familiarity and responsibility but also a sense of perspective. Even as we walk around the cathedral things crop up. ‘The aisle floor is sinking,’ reports one of the cathedral team urgently. ‘More?’ asks Finlay, calmly. 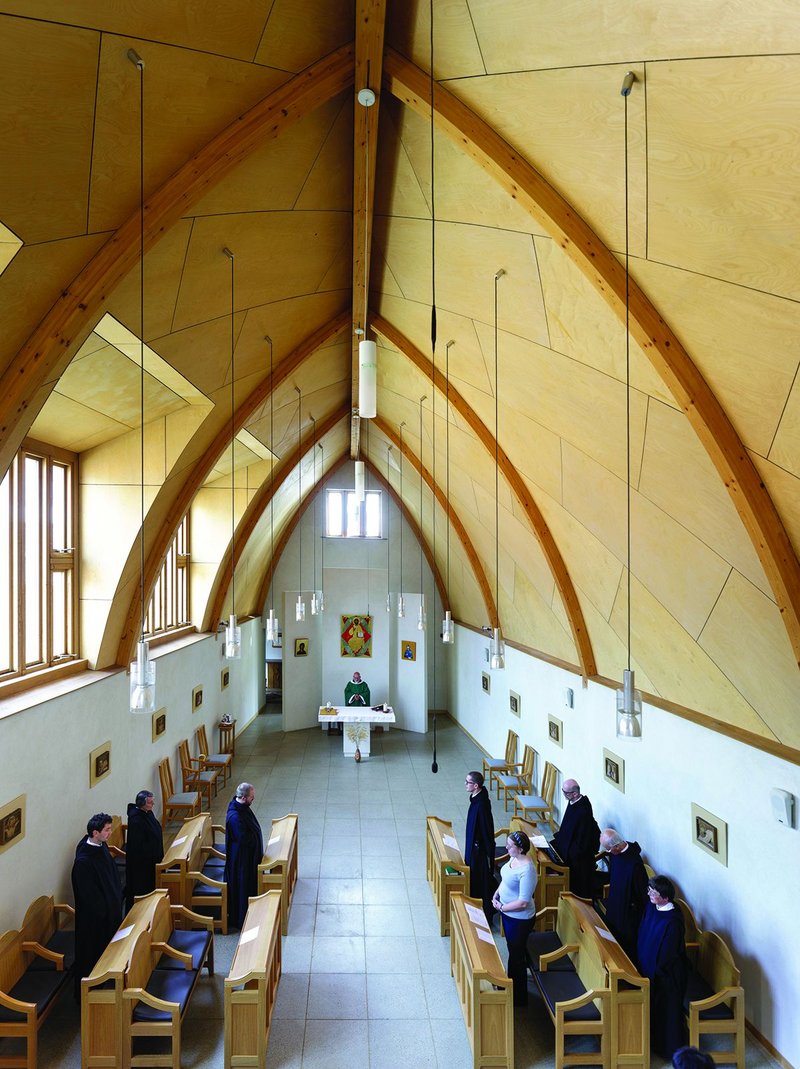 Beyond the remit of quinquennial inspections and the projects they throw up is question of the building as part of its place. She describes Exeter Cathedral as the ‘most important room in Devon’. In Worcester the cathe­dral presents a block between city and river below; historic ruins at the back could provide inviting routes and access down to the water but are littered with filthy plastic. There would be a cost but perhaps one that could be shared. ‘There is potential, you have to be ready so you can take an opportunity if it comes,’ says Finlay. It seems hardly possible to keep up with all these detailed, urgent and strategic issues on the day a week she devotes to Worcester, even with the back-up of her practice and surveyor assistant. Exeter is once a fortnight, leaving home at 6am, getting back around 10 after staying on for Evensong.

Her personal faith is quiet. She mentions the ‘mission’ of the cathedrals only once before I directly ask her about it. But it is deeply influenced by an early project at Acanthus Clews, relocating a religious community to a new, sustainable, abbey in an old farmstead near Worcester. Here a cedar shingled chapel, lined with ply, resonates with Benedictine chants. Like this, religion is beautiful for Finlay, a retreat from a busy world and a source of strength, particularly since her father and mentor died suddenly last year. Her work, and that of those like her, ensures that the precious buildings that can inspire this spiritual connectedness have a chance of getting through the next century.

Camilla Finlay is speaking in Exeter on 6 December.