There cannot be many people claiming a positive outcome from the Covid-19 pandemic, but Carlos Moreno – the mind behind the ‘15-minute city’, is convinced by one. ‘Were it not for Covid-19, I think that the conditions for deploying the 15-minute city concept would have been very hard to instigate,’ he tells me remotely from his home office in central Paris. ‘But the catastrophe of the pandemic has seen us drastically change how we live – it has forced us to reassess the nature and quality of our urban lifestyles.’

The judges of the third Obel Award, a €100,000 international prize for architectural achievement, thought so too. Presenting the award in October to Colombian-born Moreno in his adopted home, the jury chair, US landscape architect Martha Schwartz, declared them all ‘convinced that the 15-minute city is the right project at the right moment’ to win the award. As convinced indeed as Anne Hidalgo, mayor of Paris, who also attended. She has championed the ‘ville du quart d’heure’ and made it one of her key campaign promises, helping secure her second term in office. Moreno, a professor at the Panthéon-Sorbonne specialising in complex systems and innovation, is now working alongside Hidalgo to implement the 15-minute city in the French capital – one more challenge in a life that has been a string of them.

First coined in 2015 at the Paris COP21 conference, Moreno’s idea for a human-centric, environmentally sustainable model of urban development has a simple premise at its heart: that a city’s residents, regardless of age, background or ability, should be able to access their daily needs – housing, work, food, health, education, culture and leisure – within a 15-minute walk or bike ride. Adoptable to new or existing cities, the model is for a decentralised, polycentric city, moving away from car ownership, freeing up urban space and reducing fossil fuel use. It promotes diversity, innovation, citizenship and technology for common good. It seems a like a no-brainer, so why is Moreno’s idea even a ‘thing’?

Perhaps it’s because this urban ‘theory of everything’ has taken him more than 40 years to piece together and he’s pushing the concept with a messianic zeal borne out of his own experience. He might now be living on the Left Bank but it wasn’t always so. Born in 1959 in Tunja, two hours’ drive from Bogotá, Columbia, Moreno was the child of rural farmers. His father was illiterate, but wanted to ensure that he, and his seven siblings, received an education. Moreno still remembers the taste of pure Andean air.

But the innocence of childhood wasn’t to last. Soon after Pinochet’s 1973 fascist putsch in Chile, the US backed Condor Plan was propping up right wing regimes in Argentina, Paraguay, Uruguay Bolivia, Brazil – and Colombia. ‘It was a dark period for South American democracy,’ he recalls, and in the political struggle that ensued, it was the people who suffered. ‘Small farmers fell victim to powerful landowners carrying out violent sequestration of land, and my father was one of them. He became an urban dweller against his will, like millions of others.’ Moreno lived through the rapid urbanisation that he’s now seeking to resolve, ‘because as a family, we were part of this accelerated city creation all over Latin America.’

But the move to Colombia’s third city, Cali, on the Pacific coast also presented opportunities. The children went to the local public school where Moreno discovered an aptitude for maths and physics, winning a scholarship to the city’s university in 1975. He also became involved with left-wing student groups and joined the M-19 guerrillas to support the struggle. When the military sought to erase the movement in 1979, Moreno, as a political refugee, fled to France.

I decided that as a researcher my role is to go beyond the latest paradigm, which led me to conclude that a ‘Smart City’ in itself is not the solution

The 15-minute city idea is founded not on vague sociological constructs but the mathematics he so excelled at. Graduating from Paris Sud University in 1983 and influenced by its Silicon Valley academics pioneering the nascent computer industry, Moreno’s specialisations in robotics and artificial intelligence saw him trying to resolve complex real-life scenarios for industry. A PhD at the University d’Evry had him lead a team of researchers creating software platforms for genome research among other things, before helping develop digital reactor control systems for France’s nuclear industry. His tech consultancy Sinovia, founded in 1998 to focus on intelligent control of complex systems, branched out into drone guidance tech, CCTV, communication and power infrastructures. By 2006, the development of his ‘sustainable digital city’ concept brought him to the attention of French multinational utilities company GDF Suez. It acquired Sinovia in 2010, made him scientific advisor to the CEO and put him in charge of strategy for its Smart Cities programme – a stellar career trajectory for a displaced farmer’s son.

But how can a man with a background in highly specialised modes of subliminal state control now be promulgating the virtues of open democracy in his 15-minute city? How does he reconcile a past in power infrastructure, surveillance and defence logistics with notion of a free society? ‘That’s a good question,’ Moreno says after a moment, clarifying first that he could have led a comfortable life at GDF Suez. ‘But I decided that as a researcher my role is to go beyond the latest paradigm, which led me to conclude that a ‘Smart City’ in itself is not the solution.’ His global research trips fuelled that position: Mongolian capital Ulan Bator for example has one of the world’s lowest population densities but one of the highest pollution rates due to the use of coal for heating: ‘The challenge is actually climate change and sources of energy in cities. Add to this profligate lifestyles, absence of essential services, uncontrolled speculation on real estate and cities’ car-centric nature’ – issues far beyond the remit of a ‘Smart City’.

His ‘Human Smart City’ idea put humans rather than controlling technologies at the centre. ‘This was based on the triple convergence of tackling climate change for ecology, the fight against poverty through economic development and social structures to counter racism and populism.’ His ‘Liveable City’ later acknowledged the concept of ‘proximity’ as another key piece in the urban jigsaw: ‘It is a good way to create a new way of living differently.’

Moreno’s influences for these ideas are many and varied. Jane Jacobs, for instance, championing the compact, living city: ‘The best social networks are the streets themselves, before the internet ever existed,’ he says. Of Lewis Mumford’s studies of the city from a capitalist perspective: ‘Modern urbanism proposes a new product, and that product is time’. He cites French sociologist François Ascher’s studies of the effects of mobility on generating new forms of urban life and spaces and work on chrono-urbanism. Richard Sennett, in his preface to Moreno’s latest book, asserts: ‘Distance is a vice and density a virtue’  – and he’s spot on,says Moreno: ‘In modern cities, distance overrides everything and any concept of “useful time” has completely disappeared.

Chrono-urbanism factors in new ideas about the rhythm of the city, re-calibrating it for a different kind of production.’  So on to the father of post-functionalism, Aldo Rossi: ‘He posited the powerful concept of ‘typo-morphology, about city order and how its spaces can be appropriated and re-appropriated – “Chrono-topia”,’ he explains. This is crucial to Moreno’s 15-minute city – all spaces must, by necessity, be multi-functional. And it creates a scenario that would have intrigued Rossi: if a supermarket can be an art gallery, or a church be a healthcare centre, what does that mean for civic form in architecture?

When Moreno explains the idea its obviousness is its main draw. His ‘social circularity for living’ is ‘an urban and territorial ontology’ based on six essential functions: to live in good housing, to work without a long commute, to reach supplies and services via a short route, and to access health care, education and ‘cultural entitlement’ locally, within a reduced perimeter, accessed by low-carbon mobilities: 15 minutes on foot or bike in a compact, high-density zone. Critics argue that the  low-density of US cities confounds Moreno’s ‘Euro-centric... colonial’ city model, but Moreno says: ‘The 30-minute territory is no different with respect to the six core functions, it merely has more reliance on digital technology and transport infrastructure.’

And what of governance of the 15-minute city? Moreno sees this as more of a thorny issue, though he aligns himself with sociologist Saskia Sassen’s ‘global city’ and US political theorist Benjamin Barber’s work on nation states and local governance. And although he thinks law-making, economy and defence are federal concerns, you sense that the notion of the decentralised ‘city-state’ really appeals. But if his Paris experience has taught him anything, it’s that the city is a battleground. ‘Mayor Hidalgo doesn’t have powers to pedestrianise the Champs-Élysées as that’s a federal issue,’ he says. But it’s also due to private interests at the heart of global cities. ‘Emirati interests own that boulevard,’ he adds. ‘And London? Qatar probably owns more of it than the Queen.’ Nobel Prize winner Elinor Ostrom’s idea of ‘governance by commons’ comes into play here, because without a tangible benefit for citizens, the 15-minute city cannot be realised: ‘Gentrification is a common enemy because it’s a way for private interests to be obstructive in parts of the city where you need to be enacting social circularity’.  He won’t be drawn on whether he’s suggesting nationalisation of property, but rampant speculation is clearly problematic for his polycentric city idea, but he does proffer examples of active democracy from Paris – a new 27-apartment social housing project opposite the Louvre for instance. ‘There are rich people who object to living next to Ali and Laila, but it is being implemented.’ And EU-funded social enterprise SemaEst stimulates inner-city regeneration in eastern Paris by buying up properties and letting them to local businesses at below market rents. ‘We need regulatory mechanisms to act on the local economy,’ he explains.

The time seems ripe for the 15-minute city, with our urban lives fundamentally re-calibrated in the wake of Covid-19. Five years after Paris’ COP21 we’ve all woken up to another reality; that climate change needs to be urgently addressed and CO2 emissions cut, that working from home does work, that people don’t want the stress of a commute, that work/life balance has become more important, that people recognise the value of their local community.

And Moreno feels the stirring of a global movement. Melbourne, Minneapolis, Medellín... dozens of cities are now signing up to the 15-minute city ideal. And they are all looking to the architect of the transition, Moreno, and Paris, with its mayor committing 10% of the city’s budget to realising it. Judging by his recent discussions with the head of Paris’ La Défense CBD, a watershed has already been reached. Gone is the time when, five days a week, 70% of the city’s population moved into 10% of its area. La Défense is now at 20% occupancy and its corporate tenants are looking at decentralised city ‘hub’ offices. ‘Until recently we accepted the unacceptable because the old reality never gave us the choice,’ says Moreno, speaking of his nascent topophilic ‘urban creature’ who respects not only his work home, but also his streets, who acknowledges his neighbours and develops social links in his community. He sees all this not as a ‘nice to have’ but a necessity. In his Obel acceptance speech, Moreno seemed to credit his ethnic, revolutionary younger self: ‘A long time ago, I learned that in an Amazonian community, the word “thank you” did not exist and that its equivalent was “pweki”. It means “I did it because it had to be done”.’ 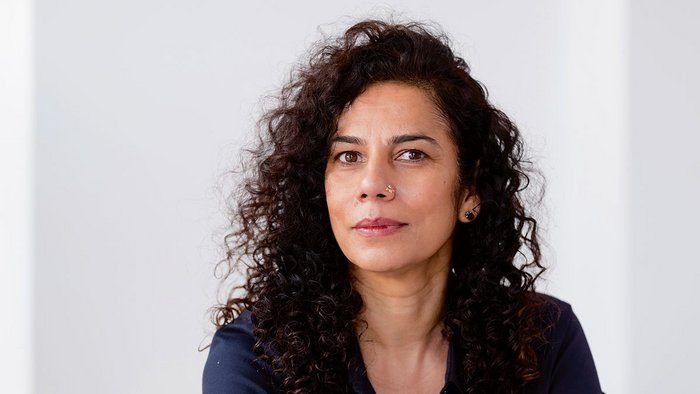 Beyond the iron triangle: Anupama Kundoo asks how, who and why