In many ways, Kengo Kuma has a traditional Japanese approach to architecture. But he thinks his V&A Museum of Design Dundee is a very Scottish project 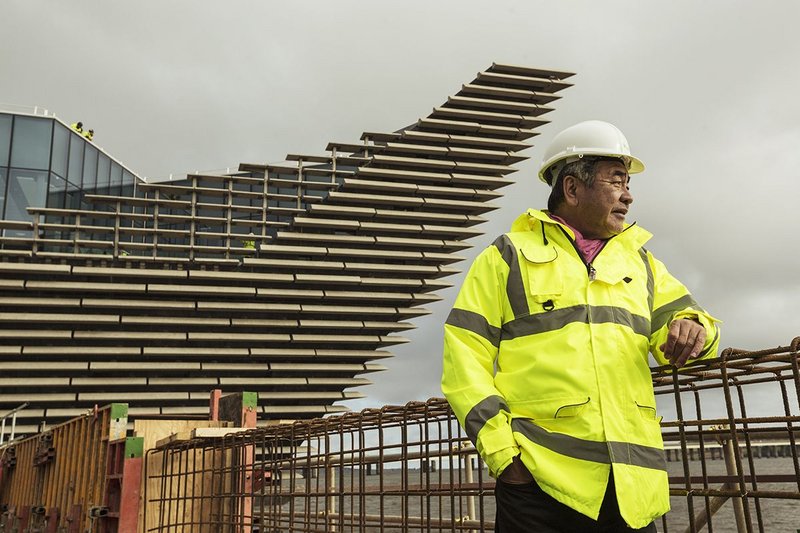 Kengo Kuma is quite possibly the only person on Earth who can make a high-vis jacket and safety helmet seem stylish. Photographed against the background of the River Tay, the horizontal concrete strakes of his V&A Dundee rising into the sky behind him, he appears absolutely at home. And when I catch up with him at a meet-the-press event in the boardroom of the V&A in London a few days later, again he moves into the slightly daunting space like a natural. Rake-thin, with a shock of greying hair, he is dressed top to toe in black, of course, with skinny trousers and slightly curious soft shoes with a waffle pattern on them.  ‘For this special site,’ he says, of Dundee, ‘We shouldn’t build a box.’

Nor has he. He has built two linked boxes, the larger of the two projecting into the estuary itself, which do everything possible not to appear box-like despite the annoyingly persistent need of museums to have windowless spaces for exhibitions. His concrete shells are double-curved – to respond, as he carefully explains, to the problem that exercises ­architects almost more than form itself: things that don’t line up on plan. Right next to his new museum, moored in a special dock, is Scott of the Antarctic’s ship Discovery (it was built near here). And there is the town’s main street, Union Street, which runs from St Mary’s Church in the town centre down to the waterfront. The two are not quite at the same angle. So Kuma warps the building to acknowledge both axes.  Possibly only an architect would notice that this is why he has done this. 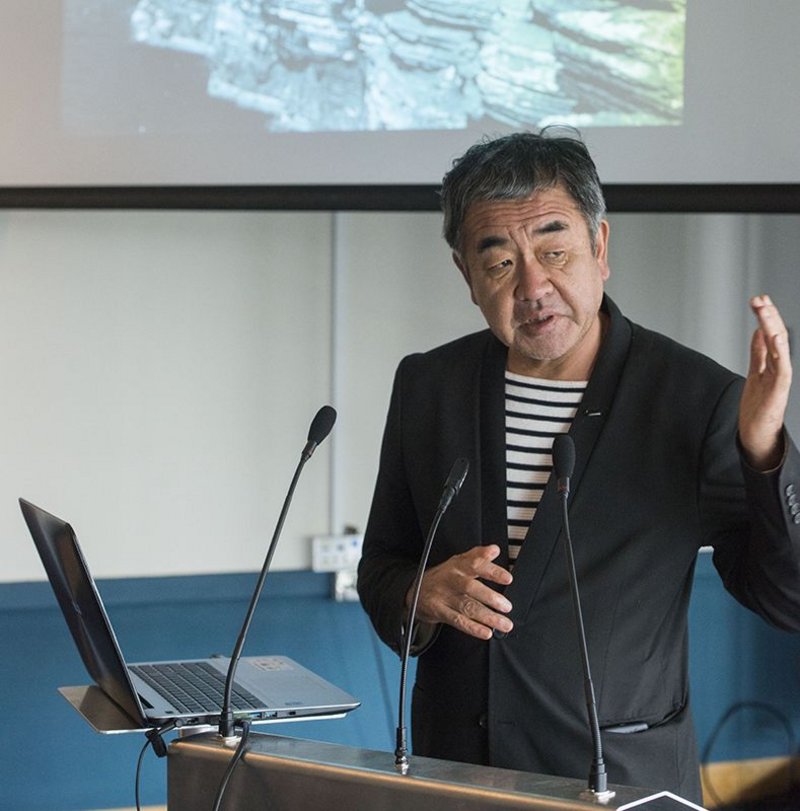 It is all about the Scottish coastline explains Kuma. Credit: Alan Richardson

Then comes the historic reference. Once upon a time (1844) Queen Victoria and Prince Albert visited the city, arriving on the royal yacht.  A triumphal arch was built on the Dundee quayside to welcome them – in painted wood for the event, but then later, much more grandly and elaborately, in stone to commemorate it. This arch – a defiantly strange, tall and spindly affair – lasted until 1964 when, with the waterside docks in decline, it was dynamited and the docks filled in to allow the Tay Road Bridge to be built. Kuma (along with some other entrants to the V&A competition, notably Steven Holl) was taken by the idea of this great lost water gate, and decided to make his museum into the form of a bridge, an arch formed by the link between the two buildings.  This has the advantage of making a sheltered outdoor space, something that the virtually two-­dimensional original arch did not. What Kuma refers to often as the ‘hole’ in his building is on the axis of Union Street, connecting it visually to the Tay.

There is another visual reference, this time to the Scottish coastline elsewhere. Kuma explains that he was taken by the striated form of the  sedimentary cliff formations in the area. This led to his solution to the black-box problem: a cladding made of horizontal precast concrete strakes, hung off the shells of the buildings. Having set up a complex geometry to the non-boxes, these then become complex items in themselves, with multiple variations. At times like this you need an engineer like Arup behind you, as Kuma has.

Kuma, who studied at Tokyo University and at Columbia University in New York,  first emerged as an architect of note after setting up his own office in 1990. He combines a large commercial practice (offices in Tokyo and Paris) with teaching at a number of schools and universities. Although he began practice with some startlingly full-on post modern projects involving colossal classical column-heads – and is by no means averse to trying out later fashionable architectural tropes, paying occasional homage to the layered, stacked  work of architects such as Diller Scofidio and Renfro – he quickly settled into a manner if not a style that marks him out. This is an architecture that prizes understatement, transparency and indeterminacy. These are  aspects of traditional Japanese architecture which he generally does without too much recourse to traditional lightweight material. Sometimes though – as in his 2002 house in the ‘Commune by the Great Wall’ which is one of the best in that curious architectural zoo – he opts for bamboo, a material full of associations for both Japanese and Chinese.

He is clear, however, that he has not imported a ‘Japanese’ building to Scotland. But he is fascinated by the various cultural connections between the two countries, be it the Japanese influence on Charles Rennie Mackintosh (a Mackintosh oak tea room interior, in storage since the 1970s, will take pride of place in the new museum, though it’s the Mackintosh late watercolours he’s referring to) or the engineering cross-talk between the companies and universities of the two nations. ‘The in-between space is very important for Japanese architecture,’ he muses on the subject of his linking ‘arch’, ‘but here the materiality is totally different. Scotland has a strong, unique topography and we’re trying to express that strength.’

Thus the veil of concrete strakes covering the building is deliberately far from delicate, with each strake having a roughcast finish. Inside, all is light timber finishes. One original design detail of the building has been modified however: he’d wanted the strakes to continue down the façade into the sea where they would presumably have taken on something of the slimy, seaweedy character of maritime structures. Instead, the building will sit on a neat concrete plinth finishing some way above the waterline. It’s the latest regularising of a design that – at competition stage – he’d envisaged as sitting on a new isthmus, à la Sydney Opera House, projecting much further out into the estuary. Cost-cutting followed and the building landed back on the dockside with a much-reduced watery footprint. Even so its quoted cost is now more than £80 million compared to the £45 million originally cited. Both Scottish and UK governments, along with the city and the Heritage Lottery Fund, have topped up the finances to allow it to proceed.

The building is called the V&A Museum of Design Dundee but in truth the great London institution has only a 20% stake in the enterprise, which will essentially be Scotland’s national design museum.  But its incredibly valuable name is over the door. Its importance for Kuma is clear – his first building in the UK is one of its most prestigious.  We don’t build all-new museums very often.  Will he pull it off?  To find out we’ll have to wait until summer 2018.