Ornament is everywhere... yet it signifies nothing. The time is ripe to dump boundless variety and return it to legibility 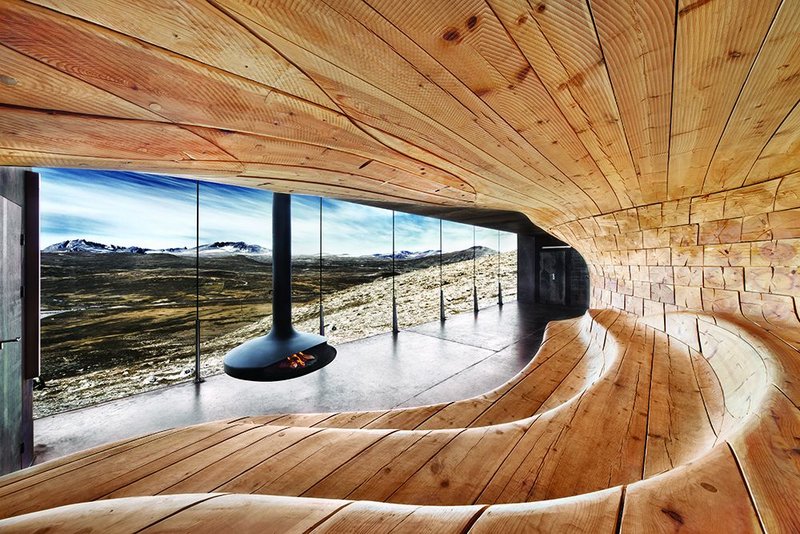 Smooth and soothing: the timber surfaces at Snøhetta’s Wild Reindeer Centre Pavilion allow visitors to be ‘in touch’ with nature even as they shelter from it. Credit: Diephotodesigner.de

Ornament has returned as digital culture has developed. Projects as different as UN Studio’s Galleria Department Store facade in Seoul (2004) and Manuelle Gautrand’s extension of the Lille Museum of Modern, Contemporary and Outsider Art (2009) present a strong ­manifestation of this phenomenon.

Today’s ornament is indebted to an ­inquiry into materiality and the senses. Our under­standing of materiality is evolving rapidly with the spectacular development of material sciences and the rise of the com­puter – with the possibilities it offers to visualise and operate at various levels. Its appeal owes something to the desire to experiment at this new frontier for design and manufacture.

The notion of materiality implies an ­encounter between a subject and the material world. First, it appeals strongly to the senses, to a mix of sight and touch in particular. It gives the impression of engaging the whole sensorium, inviting the viewer to stroke ­facades (think of Herzog & de Meuron’s tactile De Young Museum, its dots evoking a Braille text or Snøhetta’s Wild Reindeer Centre ­Pavilion that demands to be handled).

Touch but not in touch

This haptic character often goes with visual complexity. The swirls and tendrils of Foreign Office Architects’ John Lewis department store have such a hypnotic quality. This sort of design addresses perception as a whole, rather than through isolated channels. It is as if the viewer and architectural work were part of a single continuum (just as we are becoming with our digital selves). It abolishes the notion of a privileged point of view from which the building should be contemplated. Distance is no longer relevant if seeing becomes akin to touching. It’s all about Deleuzian ‘affect’ ­(intensity both superficial and immersive).

However, does the role of architectural ornament extend beyond an expressive function? A link with social distinction seems ­almost completely absent. Architectural orna­ments do not have clear addressees. When the budget allows, an architect will use the same type of texturing and patterning for ­social housing as for a museum. The emerging neutrality of decoration to social hierarchy, which used to be a fundamental role of ornamentation, is troubling. One may interpret this as ­social gener­osity, but it is more likely dictated by helplessness in the face of having to differentiate in an increasingly inegalitarian society.

When ornamental affect reigns supreme, architecture may risk losing its capacity to be on the verge of speaking. And though buildings may never actually speak, part of their appeal lies in the impression that they could if only the proper conditions were met.

Modernist architecture complemented its use of affect by a discourse on function and by ideals of technological and social ­progress, combined with concern for the natural dimen­sion of life. This attitude of so many contemporary digital designers has not yet reached that degree of maturity. But it is not enough to see architecture in terms of how buildings behave and what they produce.

How can architecture trigger meaning? There have been multiple answers to this question. Digital architecture, in particular, rejected meaning as leading to unnecessary additions, which confused the train of affects that architecture was supposed to convey. Without reinventing post modernism, it may now be useful to rediscover some of the issues that it raised, beginning with the quest for a renewed legibility of architecture.

Today, pure and boundless variability has replaced modulation. The only alternative to repetition seems to lie in a quest for original solutions

If clear architectural meaning is still offi­cially taboo, but what must we make of so many iconic projects that seem to indulge in an ­almost naive form of symbolism? Consider Jean Nouvel’s Institut du Monde Arabe (1987), which opened a new era of symbolic manipulation, with sunscreens on its main ­facade playing on a mix of ­references including ­traditional Arabic mashrabiyas. Irresistible as it may appear, the return of the symbolic repressed remains largely un­acknowledged and untheorised.

Or look further back in history. Useful precedents are not provided by 19th century allegories (it is hard to imagine that architecture will again be adorned with ­symbolic ­figures like Carpeaux’s Imperial France ­Bringing Light to the World and Protecting ­Agriculture and Science). Robert Venturi’s billboards or today’s giant digital screens may offer a ­better type of solution, but they come gen­erally after the architectural form, and have little connection to it.

It may be profitable to revisit the five ­orders of the Vitruvian tradition which show that architectural symbolism may also lie in the emergence of a possible resemblance, at the articulation of perception and culture, rather than in a static set of imitative features. The most powerful symbols are perhaps those that represent something. They truly embody a movement towards representation, a dyna­mic captured in the material of the building.

Another stimulating aspect of the five ­orders is how they related to a set of highly formalised mathematical operations. What we need today are rules, not styles; rules that may help us to attribute meaning to our ­actions. Once, the architect was also able to express himself through the modulation of rules or codes. Today, pure and boundless variability has replaced modulation. The only alternative to repetition seems to lie in a quest for original solutions, the status of which, work of art or architecture, remains difficult to assess. 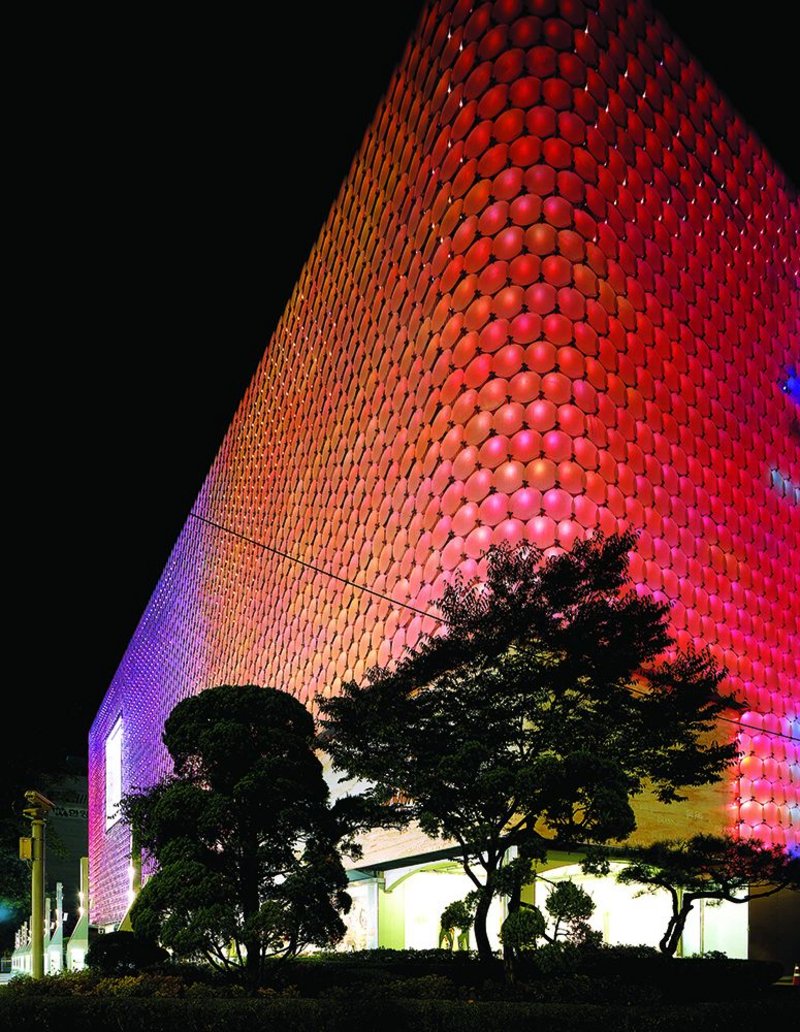 UN Studio’s Ben van Berkel has asked: ‘If museums are turning in to supermarkets, why then should department stores not turn into museums?’ In Seoul he showed the spectacular side of shopping with 4330 glass disks. Credit: Christian Richters

How can we transpose the lesson of the ­orders to contemporary digital architecture? A difficulty immediately arises: the crisis of the tectonic makes us uncertain about what will eventually replace the conventional elements of architecture if parametric design continues to spread. Parametric relationships have no parts or limbs. Urgent reflection is needed on what may replace parts in a computer-driven design world. Elementary operations such as twisting, bending or folding should probably be envisaged from this perspective, just like fundamental types of textures, patterns and topologies. The next stage could be to recognise that these operations – textures, patterns and topologies – can carry a symbolic load.

At a more fundamental level than cul­tural and regional connotations, the new regime of relations between the subject and his/her environment could constitute a major source of symbolic inspiration. After all, ornament already conveys essential aspects of this new condition through properties such as tactility.

In the future, another possible role of ­architectural ornament could lie in helping us to cope with our double existence – ­physical and digital – without falling into irremed­iable schizophrenia. More generally, one of the functions of architecture is to help us live multiple lives on various levels, in reality but also in our dreams, as physical beings made of flesh and technology and as fictions fed on desire.

Ornament presents us with a kind of ­mirror. In this mirror, we see ourselves as we believe we are and as we would like to be. The political relevance of ornament lies in its ­mediating role between the masses and indivi­duals. To play this role, ornament must convey lessons. It must reconnect with reflection and knowledge once we overcome the limitations of an approach that is almost exclusively based on affect. The time has come for architecture to regain its full momentum by throwing some light on what it means to live together in this strange ornamental world.

Edited extract from Ornament: The Politics of Architecture and Subjectivity, by Antoine Picon, published by Wiley, £27.99