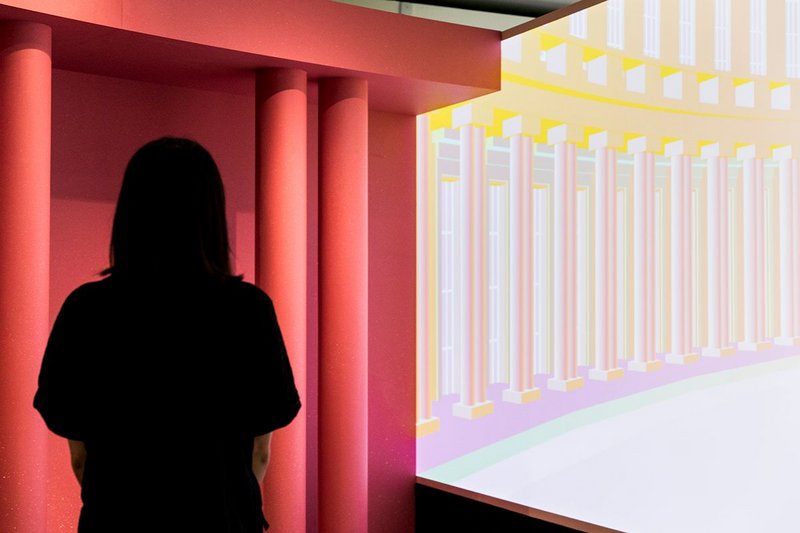 Playing the Picturesque - an exhibition by You + Pea. Credit: Tristan Fewings, Getty Images for RIBA

Whoops, I’ve just collapsed one of John Nash’s ruin follies. Not to worry, in a matter of moments it’s sprung back into position, allowing me to add to it by activating a nearby boulder to grow into an extra piece of ruin. This all takes place in Playing the Picturesque, an interactive installation by architect You + Pea, whose practice explores the use of video game technology in architectural design.

This exhibition is the most engaging of three summer installations at the RIBA responding to the London Festival of Architecture’s 2019 theme of Boundaries.

You + Pea’s aim was to play with the boundaries between virtual and physical space by extracting elements from picturesque landscapes designed by John Nash, the 19th century architect. These are then transferred into interactive virtual game environments, realised in surreal colours on the gallery walls, which can be activated by visitor movement on the floor in front of each installation. Information on each of the pieces can be accessed via a mobile phone by scanning a QR code.

This installation was enjoyable and informative on the nature of the picturesque, encouraging the visitor to experience different routes through the landscape of Blaise Castle House estate near Bristol. Here Nash worked with landscape designer George Stanley Repton to curate the visitor route to maximise the impact of features such as a mock-Gothic castle folly, a woodman’s cottage, a ruined mill, and the main house itself.

‘Nash and Repton’s confection produced sequences of visual rewards, building a sense of enjoyment in the carefully composed but seemingly naturalistic landscape,’ we learn. Another piece explores Blaise Hamlet, the quaint village of cottages Nash built at Blaise around a village green. In an installation of Windsor Great Park, the viewer can activate the installation to zoom beneath the triple-arched bridge that Nash designed for the Prince Regent over the Long Walk to create a picturesque focal point within the tamed landscape. As well as playing with the aforementioned ruins – conceived by Nash as a prehistoric tomb or Druid’s temple – we get to swoop around the urban picturesque of Park Crescent next to Regent’s Park, which Nash conceived as a complete circus at Regent’s Park – although in the end only half was built.

Playing the Picturesque would have benefitted from a bit more visitor guidance – I saw several people enter and swiftly exit in bemusement, seemingly without realising how they were meant to experience the content. But maybe this was just a generational thing – younger visitors seemed intuitively to get it.

These three summer exhibitions are certainly a mixed bag. Playing the Picturesque was definitely the most fun, raising the interesting question of whether virtual realms should be considered as sites for realising architecture. Up in the Practice Space, Walk the Line: The Distributed Vertical Border took on a serious subject – the ‘La Bestia’ train network in Mexico which is used as an ‘informal channel’ by the nearly half a million migrants who enter the country each year. This constitutes, we’re told, a ‘vertical border’ that distributes migrants throughout the country. The installation is a combination of photos, models, and documentation relating to the railway and architecture along the route that the migrants experience. Without much explanatory information, this was hard to get to grips with.

Etcetera Studio’s Above and Beyond is rather more straightforward. It is a timely homage to the Cenotaph war memorial, completed in 1919 and designed by Sir Edwin Lutyens, who was born 150 years ago. We learn about the entasis of the slightly curving sides of the structure – they would eventually meet 300metres above ground, and of the base, with the design described as an architecture that reveals ‘only a fragment of a much larger imagined geometry, crossing the boundaries of space, time and memory.’

The visitor is invited to look up into Etcetera’s installation, which is viewed from below, to see a layered compilation of Lutyens’ architecture from different projects that culminates in a central oculus.

All three summer installations extend beyond the end of LFA on June 30.

RIBA Summer Installations at RIBA, 66 Portland Place, London:
Playing the Picturesque – an exhibition by You + Pea (until 7 September)
Walk the Line: The Distributed Vertical Border (until 6 July)
Above and Beyond – an installation by Etcetera Studio (until 6 July)