Ricardo Bofill, one of Spain’s most prolific and celebrated architects, spoke at the RIBA in London in June. Carmen Mateu and Meneesha Kellay ask him about 50 years of experimental practice as part of the Taller de Arquitectura, and where European architecture is heading

'Versailles for the people’ – Ricardo Bofill’s 1981 apartments Arcade du Lac at Saint-Quentin-en-Yvelines near Paris, as summed up by Charles Jencks.

Your collective approach to practising architecture through the Taller de Arquitectura is considered unique and innovative. How has this manifested itself in your architecture?

Ricardo Bofill: The Taller [workshop] started as a interdisciplinary team centered on architecture. Collectively we considered architecture to be the synthesis of many other disciplines: technical considerations, like mathematics, and cultural influences, such as history and philosophy. However, architecture was always the centre, the basic pillar for all thought. This interdisciplinary approach led us to produce processes and methodologies to create projects in various places, countries and territories. We established a a non-conventional process in which the objectives of each project are key to the process and the development creates the architecture.

Does the Taller de Arquitectura still follow the same approach?

The Taller starts with a more amateur process, a much more utopic one, which, with time, develops professionally. It becomes closer to the reality of the place; the constructive reality and the economical and cultural reality.

We recently visited Walden 7. How do  context and ‘introducing the temple into social housing’ come together?

Walden is monumentality in social housing. In the architecture world we tend to think of social housing as filling in gaps in the urban fabric. I disagree with this treatment. Housing is 60/70 percent of total construction. The Taller considers monumentality in architecture shouldn’t be limited to institutional buildings and historical monuments. Pure housing, where people actually live, can also be a celebration of form in the same way monuments are revered. In the case of Walden 7, the community is proud to live in social housing.

Do you think monumentality in social housing calls for social change at a wider scale? Walden 7 and Les Espaces D'abraxas are both over 30 years old. Have you seen evidence of this change through the residents of this social housing?

In those projects we produced urban fabric; pieces of the city which are a mix of uses and social classes, defining the public space around them. Low cost housing cannot be an acompañamiento [side dish], it should punctuate the city. It provides all the elements we need to produce a city; mixed use brings a vibrancy. We should always include low cost/social housing in this mix. 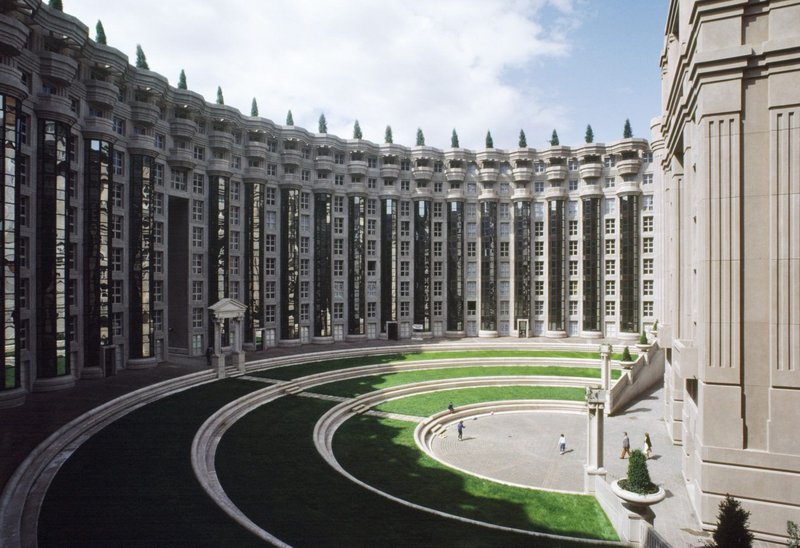 So are you more interested in social models than urban ones?

No, I’m interested in urban models as a reflection of social ones.

The Taller de Arquitectura is now 50 years old and has worked on over 1,000 projects in 35 countries, but has never built in the UK. Why is that?

There are great architects in the United Kingdom, ones really focused on technology. It is an incestuous country and difficult to compete within. The rules of the game are closed and it is very difficult to access. It is the same in Germany. In Spain, and especially in Barcelona, the situation is the opposite. During the Olympic Games, Barcelona approached 25 architects from around the world to participate. Even in France, during François Mitterrand’s presidency, they opened up competition to other architects from outside the country. The UK system is unfortunately closed and competitive internally, the architect has to fight with their neighbour architect; our studio is not interested in such competition.

A large number of brilliant young Spanish architects are leaving the country because of the Spanish economic crisis. Many of them are working in London. Do you think Spanish architecture is or will be affected in the near future by the loss of talent?

From the 90s onwards cities started to compete with each other. City planning featured in the media and politicians got involved. Architecture was suddenly a theme discussed at home, as art, movies or music are.

At that same time I was one of the instigators of bringing international architects to Spain. This helped rejuvenate and develop Spanish architecture. Spanish architects, especially those practising in Barcelona, work hard and rigorously at both small scale and larger urban scale. And Spanish architecture education is good, so graduates are interested in furthering their skills and in the creativity in larger scale projects, so they leave the country to work elsewhere.

For the first time recently in the studio we have encountered cases of architects leaving the office, not to work in their country of origin but to go to London. What does London offer them? Higher chances of professional development, a closer relationship with technology and finance. Opportunities in large studios with great organisation skills. Young creative architects are attracted by the current climate of technology and the complexity of the process. I’m not sure if it is a good or bad process, but it is clearly the reality of the current architecture world.

London is a cosmopolitan international city, and that is its reason for existing. If London wasn't so vibrant and cosmopolitan, its status in the world would fall quickly. London can’t afford that, London will not do that.

What hopes do you have for the future relationship between architects across Europe? Who do you think should be leading this, should it be architects, institutions, government?

I don’t have much trust in governments and little trust in institutions to organise those relationships. These relationships cannot and will not be lost due to globalisation, which not only includes Europe but the rest of the world. An architect from Barcelona knows what happens in London, Moscow or Shanghai, independently from the government's actions. All governments do, in many cases, is obstruct freedom of movement. For example, we are working on a project in China and need to hire Chinese architects to join the team in Barcelona – they are experts in law, procedure and context. However we are suffering all types of obstacles in order to be able to hire these architects. The world should be open.

At the Taller de Arquitectura different nationalities work together; this mix encourages emulation and new perspectives that produce the best projects. The most successful international architects are cosmopolitan and open, and have a positive relationship with other architects, clients and the public sector.

The RIBA kicks of the EUROPA talks on 6 September, with David Chipperfield on a market that is as much social and intellectual as fiscal. It is followed by a series of talks bringing together architects from neighbouring countries around Europe, focusing on connecting ideas across borders.