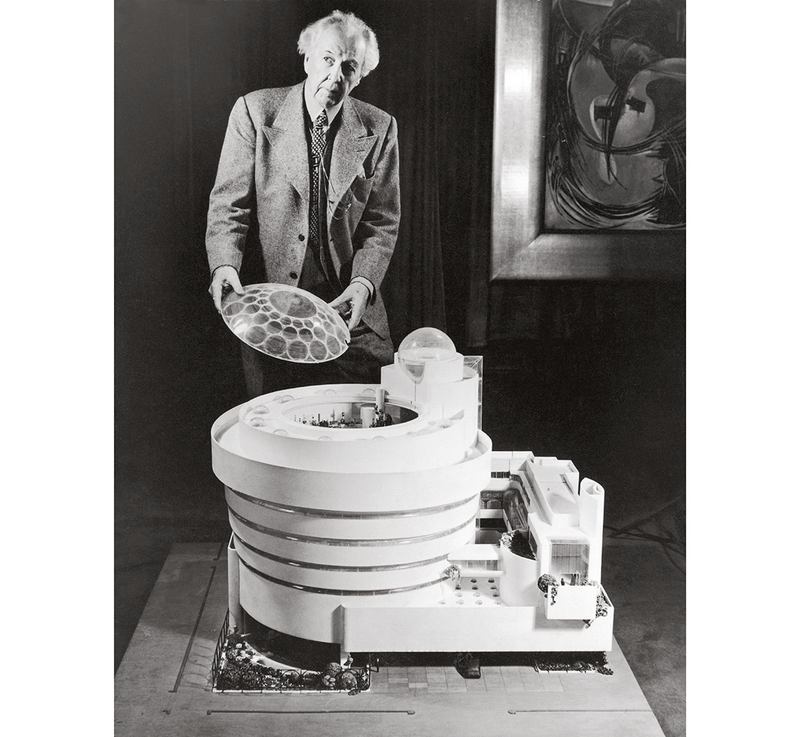 With his track record leading the Royal Academy of Arts, the National Gallery and the National Portrait Gallery, cultural historian Charles Saumarez Smith is particularly well placed to reflect on the changing nature of the art museum.

In his new book The Art Museum in Modern Times, he traces the development of these cultural institutions from the post-war period onwards: from the Museum of Modern Art in New York (1939) through to West Bund Museum of Shanghai (2019), a building designed without a permanent collection or long-term use.

As to be expected from a former museum director with direct experience of working with architects – Jeremy Dixon Edward Jones at the NPG and David Chipperfield Architects at the RA – Saumarez Smith is especially interested in the contribution of the architect in realising, and shaping, the vision of the art museum, from Frank Lloyd Wright’s iconic Guggenheim in New York to SANAA’s ‘beautifully lightweight, nearly invisible’ Louvre Lens.

He also discusses key trends in the museum world in recent decades, including globalisation, changes in how such institutions are funded, and the impact of the digital. Perhaps most significantly, today’s art museums no longer necessarily have the role of public educators that traditional museums once did. Instead, we learn that both audience expectations and museums’ approaches have changed: visitors ‘do not want to be told what to think. They want to discover for themselves’.

In the extract below, Charles Saumarez Smith discusses the important role that architects have played in driving the substantial, and ongoing, changes to the nature of the art museum. 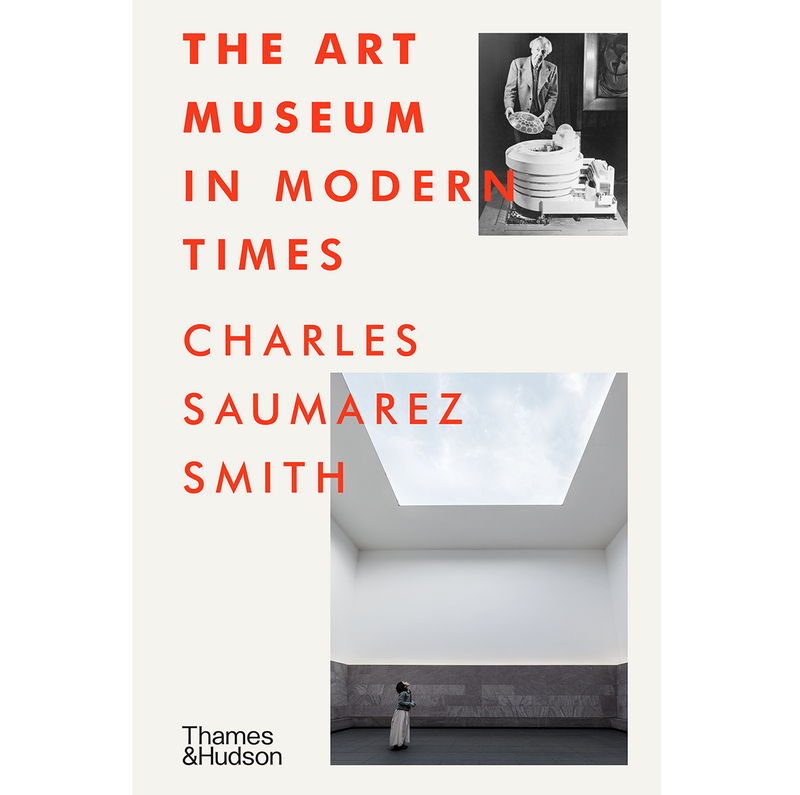 The role of the architect

In looking at the changing characteristics of museums since the Second World War, it is clear that architects have played a key role in reimagining them. Sometimes the characteristics of new museums have been entirely determined by the architect, not necessarily to the benefit of the museum.

This was first evident at the Guggenheim Museum in New York, where Frank Lloyd Wright, by then an elderly architectural grandee, demanded and expected total control over the character of what he regarded as his museum. He felt it should be as much a monument to him as a container of the museum’s collection. The Museum of Modern Art, by contrast, was, and remains, much more reticent: its facade aligned with the street and its site sandwiched between two cross streets in New York, demanding attention not for the character of its frontage but for the quality of its galleries and its permanent collection.

More interesting in some ways than the major modernist figures who were commissioned to design museums – Frank Lloyd Wright at the Guggenheim New York, Marcel Breuer at the Whitney, Mies van der Rohe in Berlin – were those architects like Carlo Scarpa at Castelvecchio and Lina Bo Bardi at the São Paulo Museum of Art, who thought more about the shaping of such institutions’ internal spaces. Indeed, Carlo Scarpa was more concerned with interiors and the way objects were displayed within those spaces than with calling attention to the shape and structure of the surrounding building. Likewise, Lina Bo Bardi was as interested in the way objects were displayed in the museum, suspended on wires from the ceiling, as she was in the creation of public space beneath the museum to be used for music, events and street gatherings.

Richard Rogers, Renzo Piano and Norman Foster were all, in different ways, hostile to the idea of the traditional museum as a set of discrete galleries for the display of works of art on walls. All three were interested in the creation of wide-open public spaces in which art could be displayed much more flexibly and more arbitrarily – within the space as a whole, but relatively autonomous within it.

The Centre Pompidou deliberately broke with the traditional idea of a museum as a place in which to enjoy and appreciate a collection of works of art: it was based much more on the idea of a fun palace, infinitely flexible, with moveable walls and floors as well. It was planned to include a library, a cinema, exhibition space: the workings of the building, its plant, were to be visible as well. Half the space was allocated to public gatherings, the aspect of the project which is said to have won Renzo Piano and Richard Rogers the competition.

The Sainsbury Centre for Visual Arts at the University of East Anglia adopted the language of the aircraft hangar or the Nissen Hut as much as it did that of a traditional museum, and it deliberately incorporated other aspects of the brief – the inclusion of the university’s department of art history and its staff canteen – within the overall envelope in order to make the nature and character of the centre less obviously a museum.

By the 1980s, city planners had begun to recognize that architects had the capacity to create symbolic monuments that would attract tourists to cities and give them an international identity. This was most evident in the series of grands projets in Paris during that decade, but just as importantly in Frankfurt and, to a lesser extent, Stuttgart. Much more attention was given to the way in which an international competition might attract superstar architects to design museums than to the ways those museums might best show their collections.

The most visible monument to this period of museum design – the one that gave a name to the so-called ‘Bilbao effect’, whereby a museum could transform the economics not just of a city but of a region – is the Guggenheim Museum in Bilbao. Here a young, energetic and creative museum director was able to work adventurously with local politicians and commission an international, superstar architect to create a museum millions have visited and many can easily visualize – but scarcely any effort was made to ensure that the holdings of the Guggenheim would be available to audiences in northern Spain.

In the 1990s, there was a reaction against this tendency to think that the exterior of a museum was more important than its contents. Before Tate Modern was built, a study was undertaken as to what artists themselves liked best for the display of their work. The answer was rough space – space like the warehouses in which they worked, rather than the smooth, cool, neutral galleries that were so favoured by the high priests of international modernism. It was decided that Tate Modern should not be housed in a new building commissioned especially for the purpose, but in an old industrial power station. The central atrium was left, as far as possible, as found space, and the galleries were accommodated at the side. Their floors were left rough to suggest that they were not new spaces, but spaces which had only temporarily been customized; this created an artificial sense of rawness in the architecture, rather than an environment which was polished and smooth.

At the Neues Museum in Berlin David Chipperfield worked closely with Julian Harrap, a conservation architect, to preserve the history and texture of the building as found, half destroyed by bombing in the Second World War. The Egyptian objects sit and hover in beautiful display cases surrounded by the rough patina of the building itself – a monument in its own right, offering visitors a rich and complex experience of the museum as an artefact independent of its displayed collection.

In the years since 2000 there has been a tendency for the architecture to evaporate altogether, a response by many architects to the self-aggrandizing buildings of the previous decade. The work of SANAA in the 21st Century Museum of Contemporary Art in Kanazawa involved a set of lightweight pavilions made of glass which are as transparent as possible, allowing what happens within to be fully visible to those outside. Their work at the Louvre in Lens was likewise to provide not much more than two lightweight containers at angles to one another, in order to lend the maximum dramatic effect to the timeline of objects from across the world which were displayed inside.

This tendency for the architect to adopt a much more low-key persona is most evident if one compares the old Whitney Museum to the new. Marcel Breuer’s old Whitney uptown was a deliberately aggressive fortress for the protection of works of art within a separate and special environment, as distinct from the surrounding city as possible; Renzo Piano’s new Whitney sits alongside the High Line, an old railway track converted into an urban park, with views out to its urban surroundings. It is integrated into the urban environment instead of set apart from it.

Finally, it is the architects as much as their clients who have been keen on the idea of the labyrinth in the last decade: the idea that the visitor should explore the interiors of MONA as if it is the discovery of a dystopian future, without knowing exactly where to go; the extent to which the centre of the Tate’s new Blavatnik Building is occupied by a staircase leading teasingly upwards, encouraging the visitor to ascend; the way that visitors explore the small Muzeum Susch, starting off by going underground and then moving into a set of gallery spaces that are deliberately illogical. Mystery has replaced logic. Order and rationality have been displaced by unpredictability and adventure.

In all these changes, it has been the role of the architect to shape and form the experience of the public, to imagine the appropriate shape of the building and to persuade the client of the beauty of the project.

Charles Saumarez Smith is a cultural historian. He was secretary and chief executive of the Royal Academy of Arts from 2007-18, and is a former director of both the National Gallery and National Portrait Gallery in London.

The Art Museum in Modern Times, by Charles Saumarez Smith, is published by Thames & Hudson, HB, £30