Covid-19 makes a very small appearance in the Architecture Room at this year’s delayed Summer Exhibition at the Royal Academy. It’s a relief 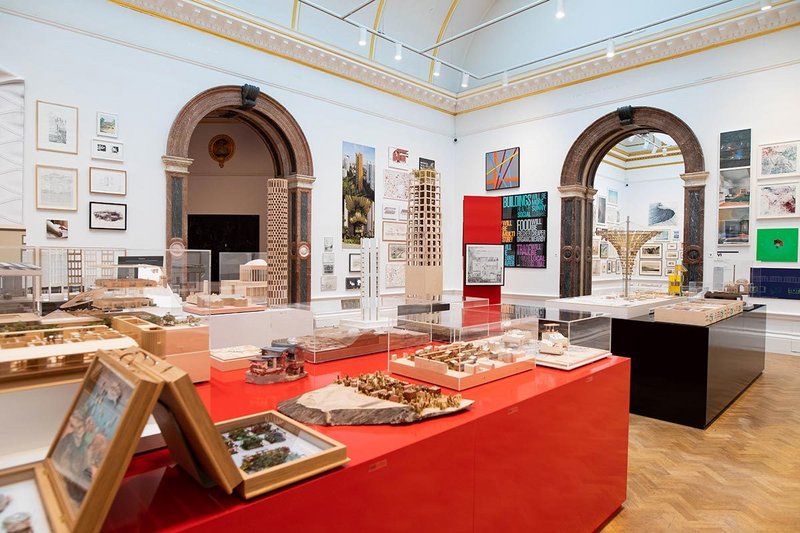 There are several curious things about this year’s Royal Academy Summer Exhibition. First of course is the timing – with Covid-19 shunting the normally June-opening show to October. Yet with the public submissions made before the virus took hold, the show does not overtly tackle the pandemic, though there are some exceptions. As Eva Jiřičná, curator of the Architecture Room says, ‘We are showing the world before lockdown’.

Then there’s the added complication that the Architecture Room was originally being curated by David Adjaye, who worked on the initial selection from the open entries, but was not available for the revised schedule.

Aware of the lack of reference to the impact of Covid-19, Jiřičná invited architect Academicians to respond to this separately in addition to their other contributions. A small number did, and these are included in the show, along with drawings by Paul Koralek and Ted Cullinan, who both died in the last year – a nice touch by Jiřičná.

In sharp contrast to the gloomy pervading mood of the moment, Norman Foster contributed an immensely upbeat piece on how Covid-19 will hasten existing trends rather than create new ones, listing seven positive outcomes such as cities becoming more green, walkable, quiet and bikable, and buildings becoming more healthy, sunny, social and sustainable. Here’s hoping. With its happy and sad faces, Jiřičná’s own message, The Choice is Yours, is more ambiguous.

‘One is smiling, one is not smiling. The choice is yours – we can either carry on and hope for the best, or we can carry on crying. We just have to do our best within the limits we have,’ she says. Niall McLaughlin’s message contains the hope that we will come to recognise the importance of physical proximity and touch, with architecture emerging as a discipline for all the senses. His practice’s charming Drawing Together, a collective drawing with 300 participants created live over Zoom and combined to make a townscape on clap for carers night, is a reminder of the sense of community felt in those early lockdown weeks. That chimes well with the overall theme for the Summer Show, which explores the nature of community.

These special exhibits aside, it’s very much business as usual for the Architecture Room. As a display it looks great – much calmer than the busy yet exhilarating Piers Gough-curated show of a couple of years ago – full of the usual range and scale of drawings, paintings and beautiful models. And as an enfilade room within the main show, it is more spacious to allow safe circulation.

As usual, the work of Royal Academicians dominates – and this feels more the case than usual, with contributions from Norman Foster, Spencer de Grey, Richard Rogers, Renzo Piano, Michael Hopkins, Gordon Benson, Peter Cook, and centenarian Trevor Dannatt among the many grandees prominent. Jiřičná clearly felt the need to rock the boat just a little, plucking an exhibit from the rest of the Summer Show – Sabrina by Michael Lisle-Taylor, a curious canvas multi-pocketed hold-all that unpacks to create an inflatable swan. This is positioned to mediate between the huge drawings by Foster (Bloomberg; ApplePark; Fred Olsen Offices) and by Piano (Stavros Niarchos Foundation Cultural Centre) that dominate one of the gallery’s long walls. It is, she says ‘a bit of pop art, a bit of everyday’ to juxtapose between ‘those big personalities’.

As impressive as many of these works undoubtedly are, I was more interested in some of the less high profile projects that nonetheless reflect some of the big pressing issues facing architects today – how to design decent, affordable housing and how to design sustainably at a time of Climate Emergency. It was good to see Mikhail Riches’ Goldsmith Street housing, Levitt Bernstein’s Carless City and Project Orange’s uplifting reimaging of the Thamesmead estate in south east London. While there was the usual scattering of mega projects from around the world, my eye was caught by the intriguing Aerial View of Kumasi Mud City, Ghana, submitted by young practice McCloy + Muchemwa with Sophie Percival.

That’s not to say that the exhibits from the big practices aren’t engaging on sustainability. Grimshaw’s Homebase Adaptive Reuse considers reuse of the practice’s 1987 building as part of the circular economy rather than demolition. Rogers Stirk Harbour + Partners’ Future Roads of Paris Motorway is a fascinating vision of a repurposed urban motorway as a multi-functional linear parkway. By 2030, 30% of the road could be given to replanting and nature, and 50% by 2050.

Groupwork presents a model from its research into the world’s first 30-storey loadbearing stone tower. The practice says the embodied carbon footprint of the stone superstructure is 20% of the equivalent steel framed building and less than 50% that of concrete.

This is one of three towers in the show along with dRMM’s Timber Tower – a Critique of the Carbon-Heavy High Rise – and Heatherwick Studio’s Eden housing in Singapore. The recently completed latter looks extraordinary, with bulbous balconies seemingly dripping with foliage.

As ever, there’s much to enjoy in the models, such as Spencer de Grey’s travelling box of exquisite card models for an Eco Resort project, Arup Architecture’s 3D printed Hindu Heritage Museum and David Kohn Architects’ Gradel Quadrangles, New College Oxford, an abstract form in Ancaster Weatherbed stone. Grimshaw’s international Eden Projects are collected nicely in a single model, while Jestico + Whiles has made a beautiful map from sobering data on poverty, gentrification, climate threat and more in Why and Where We Need to Change, London 2020.

In the main show, overseen this year by Jane and Louise Wilson, there are some references to Covid-19, some overt such as John Smith’s digital video Twice – a dirge-like take on Boris Johnson’s exhortation to wash hands for as long as it takes to sing happy birthday twice. There are a few that resonate strongly with the Covid times, such as Anselm Kiefer’s imposing Vier Plus Eins, with five scythes surely representing death. Ron Arad’s Oh Lord, Won’t You Buy Me car piece strikes a lighter note.

Those seeking more relevance to the pandemic may be disappointed. Yet visiting the Summer Show and experiencing the exhibits in person is a small but uplifting antidote to months of living mainly through screens. Rather than Kiefer’s grim reaper, I prefer to remember the piece by Bob and Roberta Smith: ‘There is Still Art, There is Still Hope’.