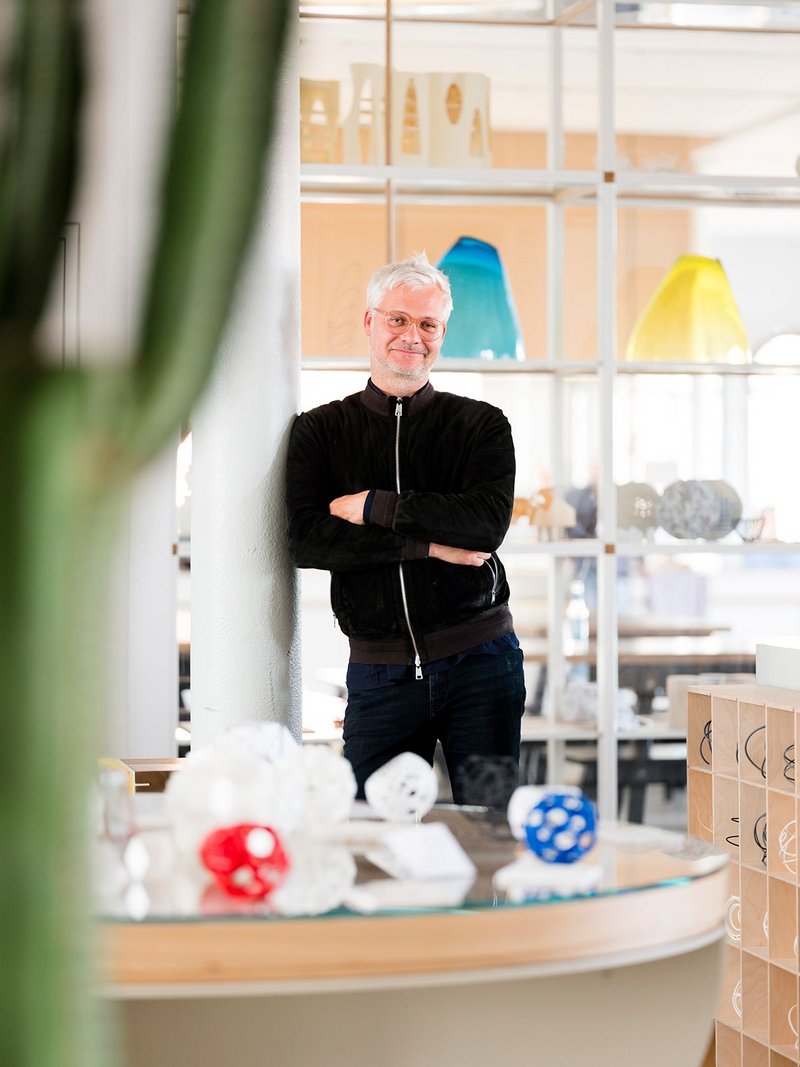 To pass through an innocuous white door in Berlin architect Sebastian Behmann’s apartment, is to enter a kind of wonderland. Here you’ll find rooms containing waxing spheres of mirror coated glass set in spirals emulating phases of the moon, colour-drenched glass panels fixed in dark corners that reflect your body in chromatic shards, a Fibonacci wire frame hanging from the ceiling, or a dandelion flower of lights set behind large Fresnel lenses – waiting to boot up and emanate like a heavenly Death Star.

Of course, this is no ordinary flat; it connects directly to the ground floor of Danish/ Icelandic artist Olafur Eliasson’s 120-strong Berlin atelier. And Behmann is no ordinary architect but Eliasson’s studio head of design, helping realise his artworks, which, over the last 20 years of their collaboration, have grown increasingly ambitious in scale and complexity. In 2014, this leap in scale was finally acknowledged when the pair set up Studio Other Spaces (SOS) – a discrete unit where architects work in the artist’s 30-strong team in an osmotic way, sliding into the art side and back again. Behmann and his team act as intermediary between the artistic concept and the real world in Eliasson’s atelier, managing the fabricators and specialist contractors that the art’s shift in scale demands.

Behmann, a softly-spoken, silver-haired but youthful 49, in jeans and trainers, takes me on a tour of the studio, and moving through the warehouse’s three floors, the atmosphere feels relaxed but focused; pockets of  palpable concentration dotting the space’s dimensions. It’s to be expected – ‘In real life’, Eliasson’s solo show at Tate Modern, is about to open, and I imagine that the propped-up, pastel-coloured canvases of painted circles, whose blurred edges hum in the basement studio’s electric light, are destined for the Tate’s walls.

The sizeable studio is a hot-bed of experimentation, where ideas are visualised, prototyped and then realised to create Eliasson’s work – whose artistic power lies in the demand for the viewer’s active involvement. Most are acquainted with his 2003 ‘The weather project’; the strange, reflected half-sun that drew two million people to the Tate’s Turbine Hall to bathe hypnotised under its dull sodium light; and perhaps know the 52m diameter walkable cylinder of chromatic glass, ‘Your rainbow panorama’, crowning Aarhus’ Kunstmuseum since 2011. Fewer will know of his four waterfalls cascading into New York’s East river, or ‘Ice Watch’, Arctic icebergs that melted before your eyes in European cities. 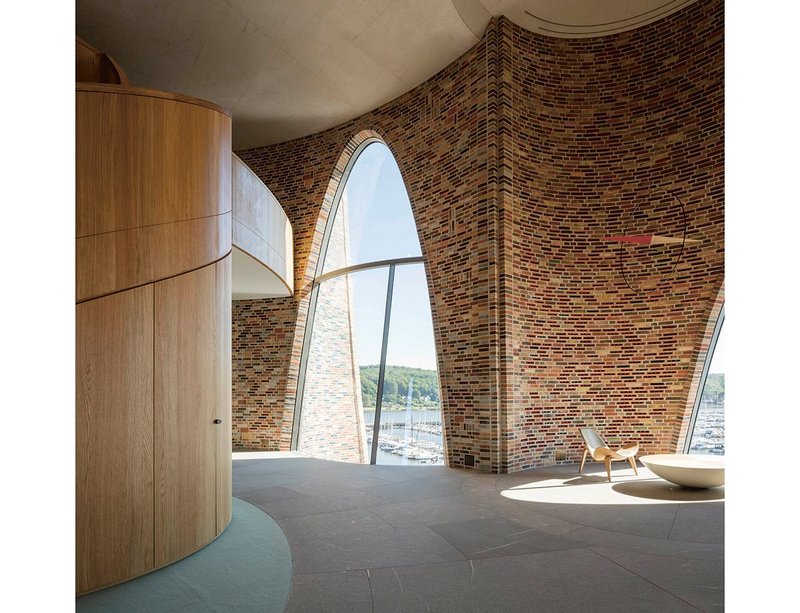 Interior of the Fjordenhus office, where a lack of horizontal surfaces evokes the sense of being on a boat. Credit: Anders Sune Berg

Behmann, involved in the logistics of realising all of these, heads the team tasked with creating permanent built works – bringing the artist’s vision into the realm of architecture. Aside from the completed Fjordenhus office for Kirk Kapital in Vejle, Denmark, a form of brick towers sliced through with parabolas floating in the city’s harbour, ‘Common sky’ is in construction at New York’s Albright-Knox Art Gallery, a beguiling light canopy springing from a single trunk of structure to span a 1960s Gordon Bunshaft courtyard. And due to open in 2021 in Paris is a two-floor permanent public artwork on the Morland Mixité Capitale building, both reflective and transparent, that will create kaleidoscopic effects of the city’s skyline and change with the weather.

With challenges such as this, how did Beh­mann arrive at his role? Self-effacingly, he says he was in the right place. In the early 90s artists flooded in to revive the cultural life of the newly restored capital. ‘Galleries sprang up everywhere,’ he recalls, ‘A huge transformation was taking place and everyone wanted to be part of it.’

Behmann studied architecture in Dresden in the former DDR, feeling that ‘you understand urban change better when you are part of the process rather than just observing.’ Here he built on his talent of ‘making things and improvising and repairing rather than buying new. There was different mentality in the former east as they’d always had less technical means and certainly less money,’ he explains, comparing the west’s proprietary, off-the-shelf construction systems with the improvised, low-tech solutions of the east. ‘I thought about this in an old Baltic Sea hotel reception in the former DDR recently, comparing the original and new handrails and thinking how simple and good-looking the old were.’ 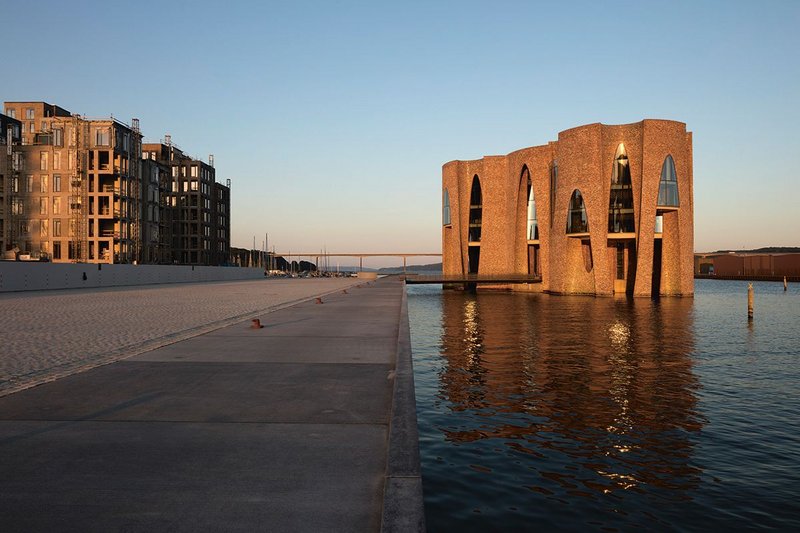 ‘We are interested in simple forms that do fascinating things’

This fascination with ‘make do’ was the making of Behmann. After Dresden he set up an office in Berlin doing small jobs and competitions, but it was by helping local artists realise larger installations that he started making a reputation. In 1994 Eliasson, seeking help to realise larger artworks, was introduced to Behmann by artist Thomas ­Demand.’ I wasn’t the only architect doing this kind of work,’ Behmann recalls, ‘but over professional ambitions, I had intellectual ones. I complemented Eliasson, I think – our interests were quite aligned.’

I ask what thinking unites Behmann and Eliasson now, from artwork to architecture. It seems the wish to make the most of a little runs through SOS’s design output, according with Behmann’s earlier preoccupations. He brings out his ‘favourite model’, a delicate Bauschatz geometry in brass and wire. ‘It’s an Oloid. It looks complex but it’s basically two intersecting part-circles and a shape we work with a lot here. Depending how you look at it, it goes from spherical to pyramidal,’ he explains, moving it round. It inspired the studio’s 2011 proposal for an extension to Hans Sharoun’s Berlin Philharmonie which, with a road running around two sides, would have allowed the flip-form to manifest. But in a world where you can draw and technically build almost anything, says Behmann, it’s also representative of the office’s thinking. ‘It looks complex but on the model all the wires are straight, which makes it easy to build. We are interested in simple forms that do fascinating things.’ So despite complex renderings on the design floor, Behmann says it’s quite the opposite. ‘We aren’t doing Gehry-like geometries. I don’t like over-engineered things. We want people to have a sense of the construction, so they can interact with it.’ 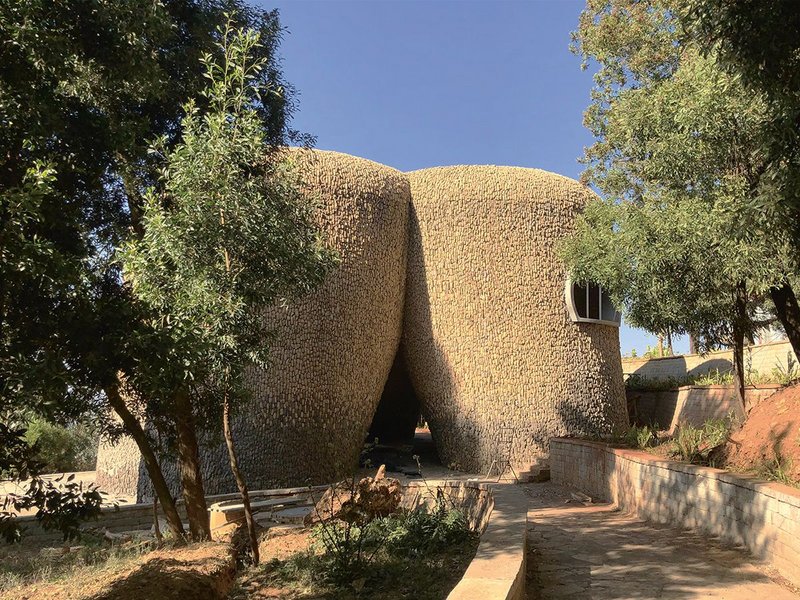 The Meles Zenawi Memorial Park Research Centre, Addis Ababa, in the terraced landscape of the park.

That thinking was also behind the 2011 collaboration with Henning Larsen on Harpa Reykjavik Concert Hall, an all-space filling hexagonal volumetric form, repeated at telephone booth size across a whole facade. ‘We thought, as Buckminster Fuller might have done, “What if we invented a different kind of form and adopted it, what would the evolution be?’’ Constructed and warrantied in the end by a Chinese fabricator, the facade design and detailing stayed firmly with the studio, which worked with a specialist engineer to ‘deliver it on an artistic level. If contractors are actively involved in the design they will always default to what we have now,’ Behmann adds. The need to keep experimenting with the form – ‘the result was spectacular’ – was critical. ‘The ambition is to do things not yet established as system in the built environment, to experiment. Not to do something “better” per se but to open up a different possibility.’

The same goes for the Fjordenhus project. ‘At first it looks very complex, but it’s a couple of geometric operations and the rest is a consequence of that,’ he says of the circular plans from which ellipses are carved. ‘You have to experience the space to fully understand it – it feels like being on a boat. Olafur says it’s because it seems there’s barely a straight surface that allows you to calibrate your body relative to it.’ But it too is born of simplicity. ‘There’s no curvature in the facade. Everything is straight lines – it’s brick after all. Almost everything in this studio has a sense of a direct crossover from high-tech to low-tech.’

Perhaps this low tech aspect is best exemplified in Addis Ababa’s Meles Zenawi Memorial Park, completing this summer, which SOS was invited to work on. The design for the park centres on the modern history of Ethiopia; walking through you encounter five buildings; a conference centre, library, guest house for researchers, exhibition space and offices. Rather than use traditional adobe the firm looked to colonial Italian modernism with a twist. Local stone cavity walls are formwork for concrete – brightly coloured as in the domestic vernacular. An exterior spiral ramp references the traditional porch, ‘the in-bet­ween space where people do business. It was important for us to use forms that would have meaning for people visiting and using the park, looking to the past and future and responding to the city’s equatorial, high-altitude climatic conditions,’ says Behmann. The emphasis was for the buildings to actively involve users, something the architect sees as one of the core ideas of Eliasson’s work. ‘What’s left out is the thing the viewer brings – that you need to be part of the artwork and co-produce it.’

A mock-up of the kaleidoscope installation for the Morland Mixité Capitale project installed on the studio’s roof.

Yet, in the public realm scheme for US basketball team the Golden State Warriors, he only hints at what the project is about, citing previous work with Japanese architect Toyo Ito as inspiration. ‘We’re building approximations of a form in stainless steel and pumping them up using water pressure. We’ve created 5m diameter spheres using this technique,’ he enthuses. It’s clear this experimentation is what makes Beh­mann get up in the morning: ‘I’ve always felt this is the best place I could work – a rich garden of possibilities. It excites me that things we develop could only be done in the context of an artist’s studio.’

With a strange tower visualisation on one of the studio walls, it’s clear that the sky’s the limit for SOS and its artistic challenging of the built environment’s conventions – and it looks like Behmann plans to continue the investigation with Eliasson. ‘The built world is a construct, man-made, not God-given. The ground condition of SOS’ thinking as a practice is that we’ve the power and means to change anything; in moving from art into architecture, this remains our prime motivation.’ Yet while speaking with optimism of the possibility this presents society with, there’s an ominous edge to Behmann’s artistic truths in uncertain times: ‘What if Buckminster Fuller had been more successful?’ he wonders. Sometimes the smallest detail can make the world tip in a whole other direction.’