This reinforced concrete shell structure is one of the most original and remarkable examples of Italian post-war Modernism. 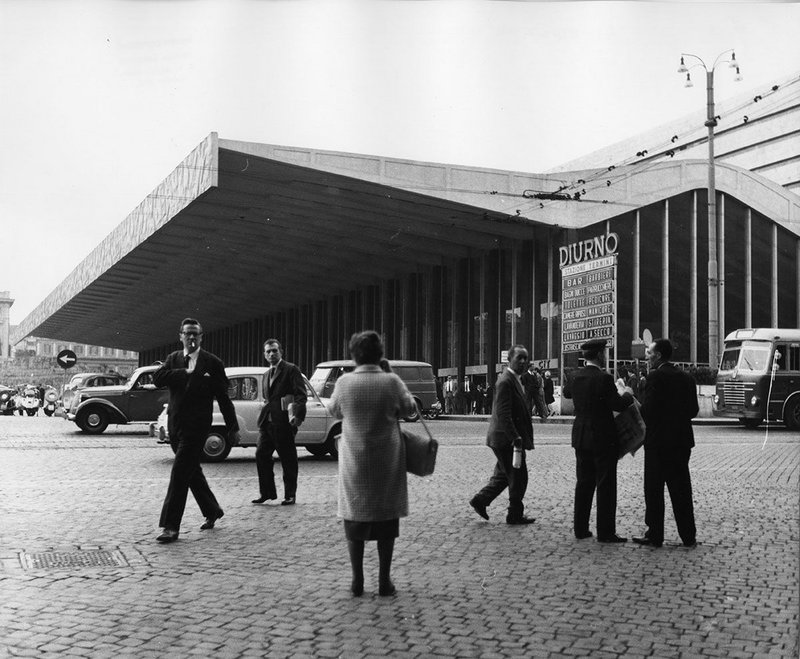 Rome’s Stazione Termini, the Italian capital’s main railway station, owes its name to the Baths (‘Terme’ in Italian) of Diocletian, built in this area in 300 AD. While the first station was completed on the site in 1863, projects for a new building were developed in the 1920s, and finally the commission was given in 1939 to Angiolo Mazzoni, an architect and engineer affiliated with Futurism. The war brought works to a halt in 1942, after the completion of the two distinctive side blocks characterised by plain facades with a long series of arches that echo a Roman aqueduct. The competition held in 1947 for the completion of the station was won jointly by Eugenio Montuori, Leo Calini and the team led by Annibale Vitellozzi, whose collaborative design was completed in 1950. Its main elements are the office block overlooking the Piazza dei Cinquecento and the atrium with the spectacular undulated roof which cantilevers by 19 metres towards the square. This reinforced concrete shell structure is one of the most original and remarkable examples of Italian post-war Modernism.

The exhibition Eternal City: Rome in the RIBA Photographs Collections opens at the Vittoriano in Rome on the 29th June.