How old is Stijn Bollaert’s eerie monochrome photograph of Ypres Cloth Hall? How old is the building itself? A building marking death and destruction is an enigma itself 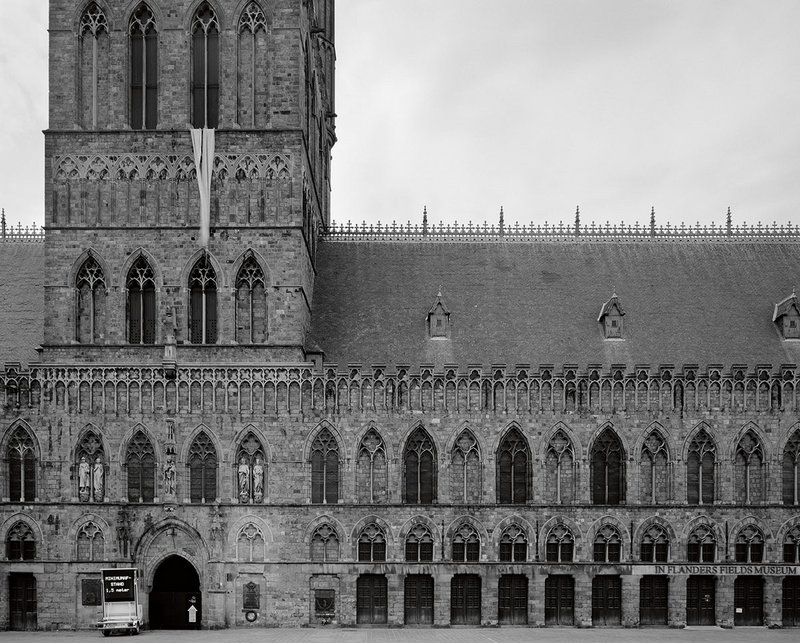 Stijn Bollaert Ypres, 2020 One of a series of Stijn Bollaert images for the 2020 book ‘Plaats’ (Place) by Belgian architect Philippe Viérin.

It probably doesn’t take much to summon the ghosts of Ypres. Its magnificent 13th century Cloth Hall, along with much of the city, was razed by German bombing in April 1915. Churchill thought it should be left as a monumental ruin, but memorials aside, the people just wanted their hall back. By 1967 they had it – its old stone niches of dead nobles now largely vacant, in default marking the noble dead.

Stijn Bollaert, taken on in 2019 to pick through the destroyed regions of Flanders to document the period’s architectural survivors for a book, used his photographer father’s old Sinar large-format bellows camera to subsume himself in the commission.

From under its dark cloth, Bollaert’s eerie monochrome exposure gives little away. Is this image a 100 years old? 50? What black arts allow us to see the hall newly completed? Only the single white cloth hung from the tower marking the fight for the living, and the deserted Grote Markt at its foot, intimate a battle of a very different kind.