With triptychs and a hint of an altar, The Banality of Good: Six decades of New Towns, Architects, Money and Politics show at the RIBA draws on religious iconography in its staging of an international exploration of the New Town movement 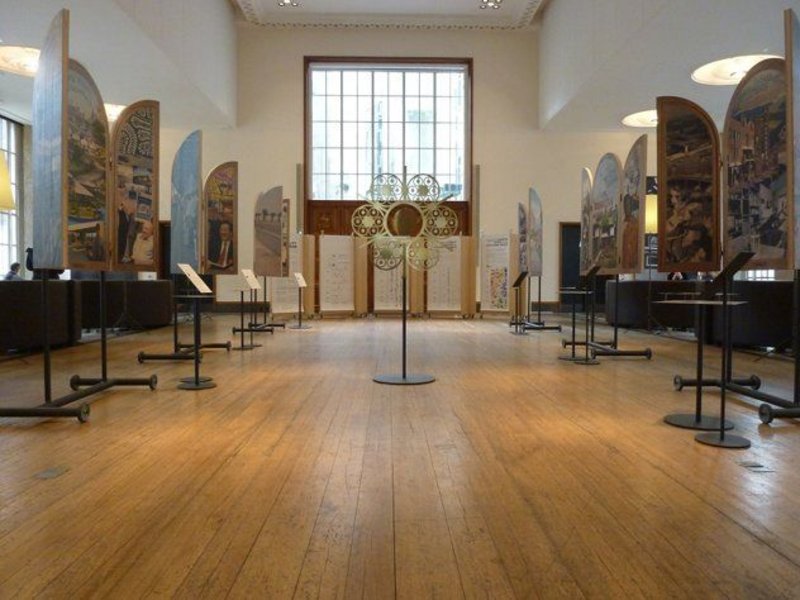 What are we to make of this? Is it just a clever exhibition design device or the suggestion that this utopian programme is worthy of worship?

Conceived by Dutch collective Crimson Architectural Historians and first shown at the 2012 Venice Architecture Biennale, The Banality of Good is a small but engaging look at international manifestations of the new town (though it does seem rather lost in the large Florence Hall space).  At the start, the show discusses the basic new town DNA of urban centres, neighbourhoods and infrastructure, then explores its application in six triptychs that line the aisle on the way to the altar, where panels analyse the way the concept has changed over the decades as it absorbs the particular values of the time and place.

These case studies are well chosen and nicely illustrated with images of people living in the towns, along with some basic info. Stevenage, created in 1946 for working and middle classes escaping post-war London, is a familiar UK case study. The other triptychs are less well-trod. Tema in Ghana, masterplanned by Greek planner Constantinos Doxiadis, was the most obviously influenced by English New Towns while the cosy, canalside Almere development in the Netherlands, shuns high-rise for low. We learn about Alphaville-Tamboré in Brazil, established in1973 as a gated community for the wealthy based on an ideal of 50s America. Songjiang near Shanghai adopted pastiches of European architectural styles in ten new towns included the well known Thames Town to house middle class professionals. King Abdullah's Economic City in Saudi Arabia adopted a new town model with an almond-shaped CBD, industrial zone and cul-de-sacs of luxurious villas.

The altar is the business end of the show, arguing that utopian visions for new towns have given way to creating exclusive communities for the few. And crucially, it bemoans the lack of engagement with architects, who have ‘disappeared’ from the masterplanning phase and are instead limited to ‘aesthetic consultancy’.

When successful, radical new towns had a character of ubiquitous normality. What’s needed, argues the show, is for new towns to reject the ghetto of exclusiveness and instead ‘embrace the banality of good’.

This is a diverting show, but such a big, and still relevant subject deserves far more extensive treatment than is possible in this bijou display. More please.