A 94 storey sepulchre, a double bridge to handle river traffic and our own Eiffel tower star in The London That Never Was 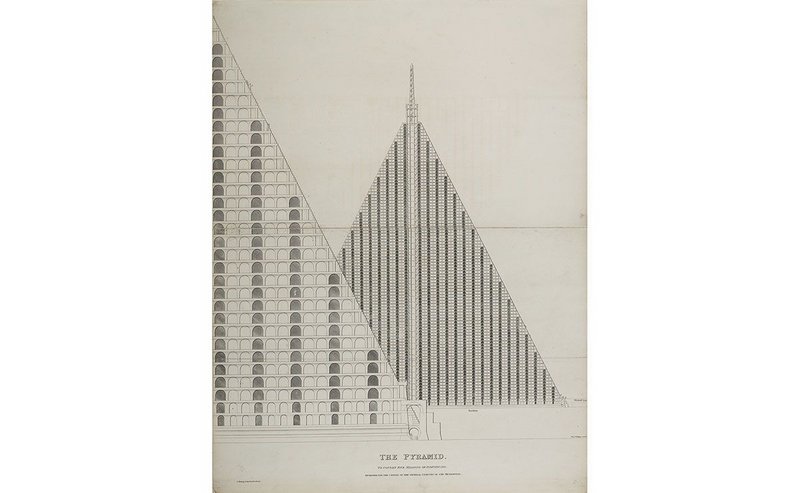 The Pyramid to Contain Five Millions of Individuals Designed for the Centre Of The General Cemetry [sic] of the Metropolis, designed by Thomas Willson, 1829. © London Metropolitan Archives (City of London).

In 1829, architect Thomas Willson had a bright idea to deal with the pressing problem of the lack of space in London to bury its dead. He designed a 94 storey Metropolitan Sepulchre for Primrose Hill, with a total burial capacity of five million topped with a viewing gallery.

This rather astonishing proposal is one of the highlights of The London That Never Was, a new exhibition celebrating unrealised visions for the capital drawn from the London Metropolitan Archives.

The pyramid is certainly one of the more extreme of the proposals, which are mainly responses to real briefs, whether designing a new London Bridge in the 19th century or creating a futuristic monorail in the West End in the Swinging Sixties.

This small display – part of the Fantastic Feats: the building of London programme – aims to highlight some of the unfulfilled visions that, though visually interesting, are little seen outside the archive. This holds an astonishing 3.5 million items drawn from local government files as well as other public sector and private collections.

‘There was a lot of digging to do to find the gems,’ says Laurence Ward, LMA head of digital services, who hopes the exhibitions will raise awareness of the LMA. ‘We want people to visit our archives and know that this heritage is there, waiting to be discovered,’ he says.

While the display begins with rebuilding ideas after the Great Fire of London, the bulk of the content concerns the 19th century, when the fast growing city was presenting infrastructure problems that needed addressing.

‘Lots of designs were done as fantasy pieces and were never expected to be built. But we’ve confined ourselves to projects that were meant to be built,’ says the lead curator, LMA assistant library Jeremy Smith.

There are a cluster of bridge proposals including the particularly ambitious Double Bridge designed in 1800 by the City architect George Dance the Younger. These parallel crossings were positioned 300 feet apart and terminated on both banks in a vast, linking, semi-circular public plaza that would have given a very different, expansive character to the riverside. The idea of the twin crossings was that while one bridge was opening to let through a tall ship, traffic could divert to the other until that one in turn was opened, by which time the first crossing would be operational again as a bridge.

In the same year, Thomas Telford proposed a curved new London Bridge made from cast-iron. Instead of designing an opening bridge, he conceived a single-span bridge that rose high enough for ships to sail beneath even at high tide. An 1862 proposal for a suspension bridge on the site of Tower Bridge, designed by Peter Barlow and Robert Richardson, also used height to avoid the need to open. This 1862 elevated crossing was entered via spiral passages within tall bridge piers that were surely inspired by the Leaning Tower of Pisa.

There was certainly no shortage of vision. In 1880, Philip Revell planned to cut out the inconvenient loop in the Thames that encloses the Isle of Dogs by the creation of a canal across the top – a short cut that would save three miles of sailing. The loop of river then becomes Imperial Dock. Curiously, Revell also proposed added fortresses to the Isle of Dogs to repel any invaders.

We see a glimpse of a very different memorial proposal for Trafalgar Square by John Goldicutt in 1835 before the idea for Nelson’s Column. Instead, the naval monument is rather more unassuming with a background of lush gardens in front of the National Gallery. There are also plans by architect S Benwell in 1820 for a grand, granite, Waterloo Monument that would have been considerably higher than Nelson’s Column, which was built some years later.

I enjoyed Thomas Dunn’s clearly impractical attempt in 1862 to provide a safe crossing for pedestrians at the treacherously busy Ludgate Circus. He proposed tight, circular staircases and walkways, which, as well as being difficult for the elderly and infirm to access, might also, worried client the Commissioners of Sewers of the City of London, have attracted ‘sightseers and idle people’.

Architects were turning their minds to the problem of the live cattle market at Smithfield, where the weekly influx of livestock caused considerable logistic difficulties. James Bunston Bunning’s 1851 proposal created 4000 orderly pens for animals with a bathhouse for drovers and a fancy fountain for washing boots, all funded by nearby housing development. In the end, the whole market was relocated further out at Islington as Caledonian Market.

There are some ‘what if’s. T Benham’s plan to relocate the Crystal Palace to the newly laid out Battersea Park after the 1851 Great Exhibition conceived the structure as a giant wintergarden and place of amusement. In the end, it relocated to Sydenham before its demise by fire in 1936. Who knows if it would have survived any longer in Battersea, where it surely would have been more vulnerable to wartime bombing.

London’s version of the Eiffel tower, the Metro Tower, is perhaps the most poignant. Unlike the other designs shown in the exhibition, this great vision actually got properly under way, with the legs and base built before the 360m tall project was abandoned, leaving its remnants standing from 1895-1907 in Wembley Park before they were dismantled.

The LCC’s plan to redevelop Piccadilly Circus (1958), and the GLC’s feasibility study for a Monorail (1967) are the most recent of the unfulfilled grand designs in the exhibition. So there’s no Garden Bridge, but then we’ve all had quite enough of that for the moment. It’s far more interesting to appreciate these rarely seen unfulfilled visions, and imagine how different the capital may have been if they’d gone ahead.