A team dodged 18th-century plague and bandits to document a hugely influential architectural tour of once-splendid temples and theatres in ancient Ionia. The results feature in an exhibition at Sir John Soane's Museum 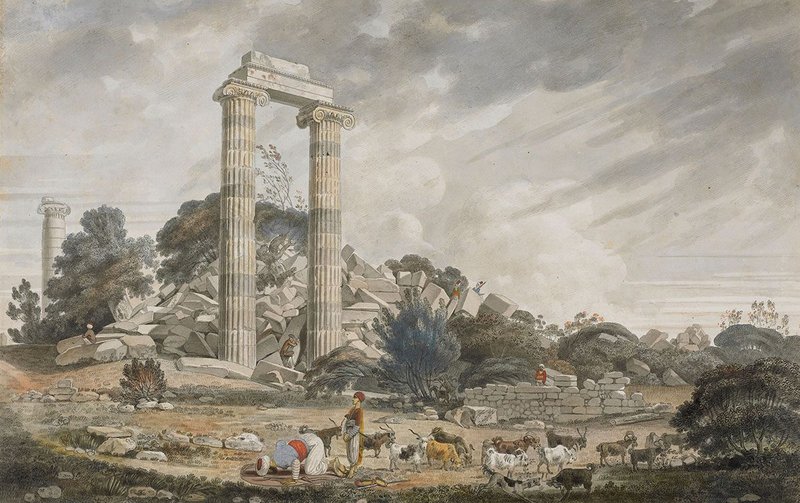 William Pars: Ruins of the temple of Apollo at Didyma, from the north-east. Pen and grey and black ink and watercolour, with gum arabic and some body colour, October 1764 © Trustees of the British Museum

In 1764, the antiquarian Richard Chandler, architect Nicholas Revett and young artist William Pars set off from Gravesend on a mission funded by the Society of Dilettanti to visit and record the 8th-century ruins of ancient Ionia (now modern-day Turkey and Greece). The resulting publications were to be hugely significant in promoting the antiquities of the Greek world. Given that Soane himself purchased accounts of the expedition, it is particularly appropriate that Pars’ watercolours, some of which are exhibited publicly for the first time, should be shown in the context of this venue.

The journey turned into a two-year, adventurous expedition, taking in often remote sites in western Turkey that were famed in antiquity but rarely visited by western travellers, and along the way narrowly avoiding a plague outbreak at Smyrna. The group detoured to Athens, where Pars recorded the wonders of the Acropolis and, in doing so, set in motion the acknowledgement of the Parthenon in western art.

Often the group slept in makeshift camps, protected from local bandits by armed local guides and guards who smoothed the expedition’s path. For Chandler, Revett and Pars, their reward for what was no doubt at times a gruelling journey is clear from Pars’ beautiful watercolours of the sights. These evocatively depict the once-splendid temples, theatres, and amphitheatres in their romantic state of ruin among stunning landscapes. Some, after so many centuries of ruin, are literally just a – very poetic – heap of stones. In his diary account, Chandler talked about scenes of ‘much novelty, grandeur and beauty’.

The drawings’ fascination doesn't just lie in their depiction of the architecture. These are not dry technical drawings – indeed the society specifically requested that Pars should portray people, flora and fauna. Pars certainly took this on board and atmospherically depicts the surrounding landscape and the people involved in the expedition. We do glimpse Revett absorbed in his architectural measurements, but Pars seems rather more interested in the guides and attendants that form part of the entourage and on whose skills the mission entirely depends on. While they do come in handy for illustrating scale, he is clearly also drawn to them as colourful, exotically dressed subjects, whether relaxing smoking on long pipes, playing instruments or going about their prayers. In Pars' drawing of the theatre at Miletus, the ruins, although visible in the distance, are clearly not the main event. Instead, Pars gives us a vignette of the entourage attempting to board a river ferry on horseback, showing himself trying to control his rearing horse.

The Acropolis images will be particularly interesting to anyone familiar with its celebrated major buildings. In his depiction of the Erechtheum on the Acropolis, Pars chose not to focus on its famous caryatid porch but instead showed it from the north-east, opting to depict it with a colourful group of locals and with the views of the city far below. We see how the portico of the Propylaea gateway building had been walled up after recently being used as a munitions store. And the Parthenon itself is shown in close proximity to a mosque.

Pars’ drawings have a nostalgic and melancholy feel, according to exhibition co-curator and Sir John Soane’s Museum curator of exhibitions Louise Stewart.

‘You just want to be there and inhabit that world,’ she says.

Co-curator Kim Sloan of the British Museum hopes the exhibition will help promote the ‘wonderful’ work of Pars, who is relatively unknown.

The exhibition is also a reminder of how easy it is for us today to lose sight of the slow nature of architectural media of the past, when the large-scale, lavishly illustrated books that influenced many an architect took years to produce. Pars spent two years working up his pencil sketches into watercolours, which appeared in the Society of Dilettanti’s Ionian Antiquities in 1769 and Antiquities of Ionia in 1797. The latter was published again as late as 1821, more than half a century after the original trip, in a new folio combining Chandler’s expedition and a later one, by which time the Greek revival was at its peak. Chandler’s diary accounts were published in 1769 and 1797.

The exhibition was curated by Ian Jenkins (who died last year), Celeste Farge and Kim Sloan of the British Museum and Louise Stewart of Sir John Soane’s Museum. It’s nice to note that the Society of Dilettanti Charitable Trust supported the exhibition’s accompanying catalogue – further proof, if any were needed, that they really were in it for the long haul.