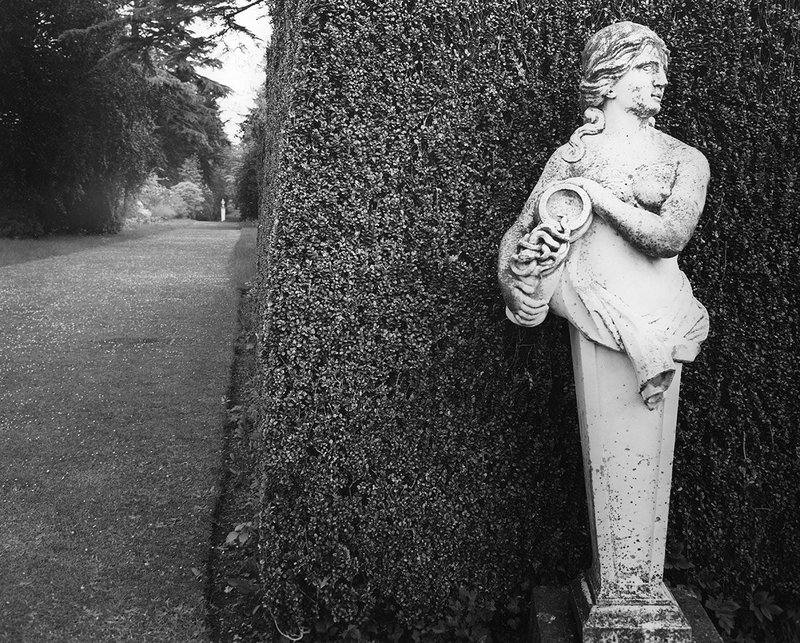 Figure in the form of a herm at Blenheim. Credit: Edwin Smith / RIBA Collections

Several groups of tourists clustered in the Great Court of Blenheim Palace, maybe waiting for tours or just stuck in awe at the scale and grandeur of the three-sided courtyard and Grand Avenue view towards the Column of Victory. One of the groups, about 30 people, began to disintegrate, and in two lines proceeded towards the sides of the court, lining up to face one another as if echoing the colonnades behind them. It became clear they were not tourists, but what?

Dressed as any other visitor, they stood motionless, uncannily framed within architecture, a gentle humming noise beginning to fill the space between. Seemingly calling to one another with a weeeooOOOoooo noise, the soundscape slowly crescendoed, fell in and out of synch, echoed off the buildings, and slowly attracted the attention of (actual) visitors. The undulating perambulatory chorus stopped as a female from each side left their line to meet in the centre, proceeding to twist their forms around one another in battle and passion, simultaneously singing in a high pitch at one another, alternating a similar harmony and discordance to that of the host architecture, perhaps enacting the statues of grace, virtue and warfare watching over the scene.

This whole narrative was Untitled Scene for the Great Court, a work by Tino Sehgal, the latest artist commissioned for a major solo exhibition by Blenheim Art Foundation. Previous artists include Cecily Brown, Maurizio Cattelan, Ai Weiwei and Jenny Holzer, though Sehgal is the first to leave the confines of the palace and develop work across the landscape.

Sehgal is perhaps best known in the UK for his 2012 Tate Modern commission These Associations, in which 150 participants filled the Turbine Hall with choreographed spatial patterns, singing and interaction with millions of visitors over the Olympic summer, for which he was shortlisted for the 2013 Turner Prize, and awarded the Venice Biennale Golden Lion the same year. 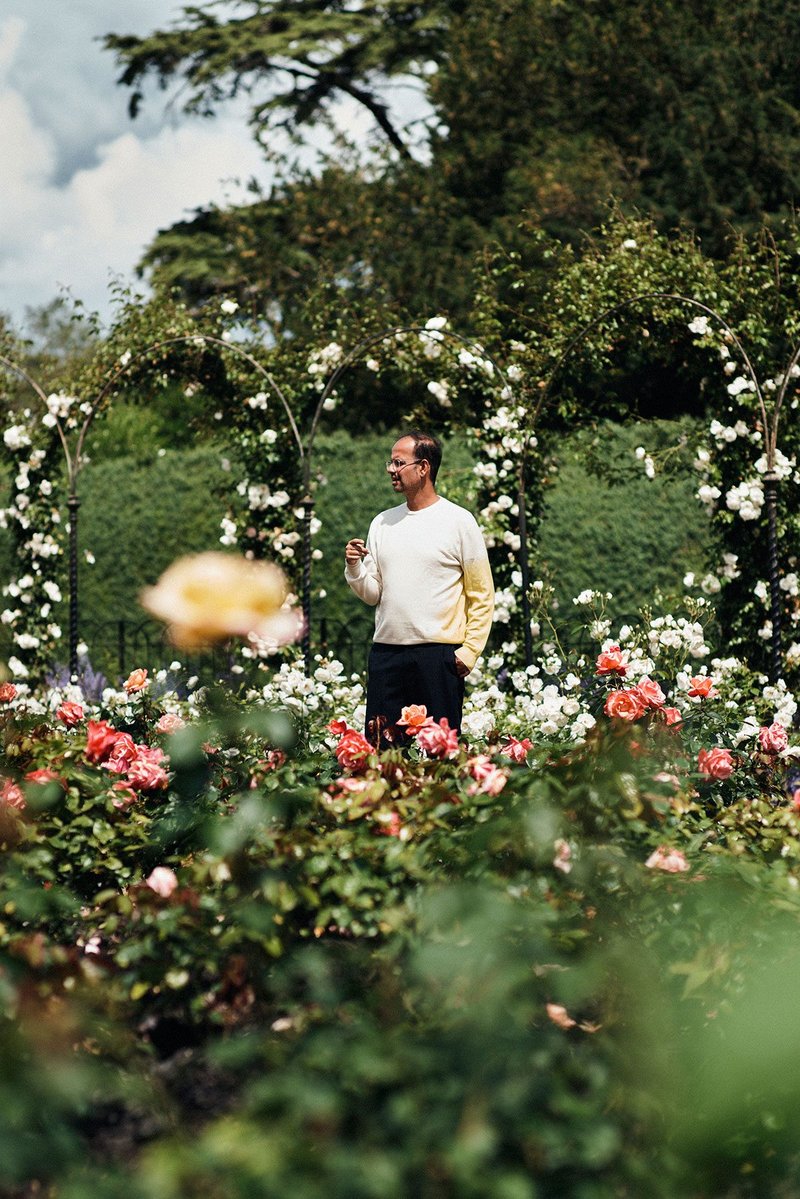 A disclaimer: I was one of those Tate participants, so this experience in Blenheim has a distanced but also personal resonance, and such duality of distanced activity with elements of personal connection are core to the artist’s work. So it was within the Rose Garden when, thinking I was alone after participants had performed the haunting sequence This Element, I was approached by one who had not departed. She proceeded to tell me a personal story of navigating a successful but tirelessly unfulfilling banking career, before personal tragedy made her reassess her values. We exchanged some words of personal loss, and she left to find her swarm. I won’t see her again, but the story and unexpected intimacy remain.

Sehgal deals with this notion of exchange, of cultural and personal currency through interaction, body and voice. It’s hard to place his works, existing between performance, ‘happening’ and choreography, as they are designed as experiential moments (Sehgal doesn’t allow his works to be photographed) accidentally uncovered rather than sought out or proclaimed.

When reduced to image or prosaic explanation, as the opening two paragraphs, there is a powerful element of the moment lost in translation, and it is that precise moment of encounter in which his art is located. At Blenheim there is no map or tick list to navigate all eight works, instead they constantly play out around the grounds in different orders and locations. A visitor may stumble across an intervention when turning a corner, or perhaps be resting in a location then joined by some of Sehgal’s 52 participants – made up from the local community in Oxfordshire – unfolding a work around them.

As I walked alone down a path, an unassuming lady standing near a tree slowly turned towards me, locked eye contact and serenaded me with a medley of songs. After a slowed down ‘…let there be love’, she spoke the title ‘This You, Tino Sehgal, 2006’, smiled and turned away. A small, unexpected and personal connection within the vastness of Capability Brown’s manicured, calculated beauty, and just one of a chain of encounters as staging posts on a path through nature, in the same way that grottoes, follies or temples were sited as set pieces on a perambulatory circuit of country estates.

The artist speaks of how Brown teased landscape to create a perfect harmony of human nature and natural nature. In the press release he writes: ‘As a society, we will need to take this ease as a foremost example for all of our undertakings to meet the global sustainability challenge of the coming decades’, and in conversation he spoke to me of how this subtle improvement of what nature offers is a potential model for politics and society.

Brown’s ‘improvements’, however, frequently involved dispossession of communities (even entire villages) as well as restructuring nature on a huge scale including the levelling of entire hills or, as at Blenheim, damming rivers to form artificial lakes. These landscapes, appearing effortless and at one with nature, were in fact products of cutting-edge engineering, great expense and enormous invisible human labour.

Such smooth beauty not only conceals violence, but in this instance is a product of it – the entire estate was built as a reward to the Duke of Marlborough after his victory in the Battle of Blenheim in which 10,000 perished. And so it is somewhat disappointing that Sehgal, an artist deeply interested in value systems, cultural exchange and forces of human and nature combining, has here treated the landscape not so much as a site of critique, but at face value, not questioning what lies beneath.

At its best, however, there are poetic moments of resonance which, if they don’t question the setting, do resonate with the depth of cultural play already present in the architectures and aesthetics of place. As I sat to rest on one of the six benches around the cherub-laden fountain in the Roundel garden, the water jets suddenly stopped and a sonic and movement trialogue between performers took over the space, including a masterful reimagining of beatboxing of Beethoven.

These motifs of updating classical and pop references into a new site and language are ones which are already present at the palace, from the one-third-scale Bernini fountain, to repeated classical Grecian and Roman citations – and when such folded references recur within these new situated works, there is a joyous if unexpected harmony with their historical surroundings, and curious kinetic updating of the statuary and artworks scattered across the building and landscape.

Tino Sehgal at Blenheim Park & Gardens runs until 15 August 2021. Pre-booking is essential for all visits.