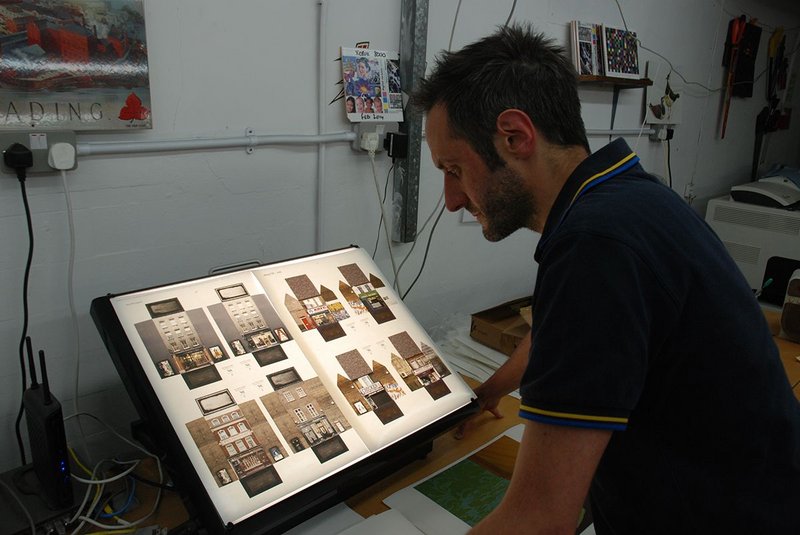 Barnaby Barford working on the shops.

For many months, artist Barnaby Barford cycled some 1000 miles around the streets of London photographing 3000 shops from every postcode in the capital. Each image was fired onto ceramic transfers to create 10-13cm high, individual bone china shops which will be stacked up to create his own, retail version of the Tower of Babel.

This 6m high ceramic ensemble will be installed in the Medieval & Renaissance galleries of the Victoria and Albert Museum from 8 September. At the base of the edifice the miniatures are of derelict shops, rising to exclusive boutiques and galleries at the top, where the tower appears more precarious.

According to Barford, shopping has surpassed all other activities to the extent that we are consumers rather than citizens. He wanted to explore this by creating a celebratory monument to shopping and the retail glory of London, while likening attempts to find fulfillment through consumerism to the doomed Biblical Tower of Babel.

Some of the bone china shops and buildings that will go into the tower. Barnaby Barford

Barford’s tower is also a tribute to the variety of shops in the capital, from an outlet specialising in nuts in Shepherd’s Bush through to London’s first donor kebab shop (in Walthamstow), and the celebrated Soho café Maison Bertaux.  Barford was keen to explore the shopkeepers’ personalities and design sensibilities such as their choice of font and colour on the shopfront. His personal favourite is another Soho café, Bar Italia.

Barford expects visitors to draw different meanings from the installation.

‘I think how people see this will very much depend on their preconceptions. Does it represent our hopes, dreams and aspirations to reach the top? Is it a stark reminder of the difference in living standards and the widening gap between rich and poor within the capital? ...People love shops, they love shopping and the most I can ask is that I hope they leave asking questions about their city.’

Fittingly, each individual shop will be available for purchase at the V&A shop, with prices ranging from £90 – £6000.

Barnaby Barford: The Tower of Babel, from 8 September – 1 November 2015, Victoria and Albert Museum, London. The installation is part of The London Design Festival (19-27 September 2015)