Blink and you’d miss it. With the world’s pavilions jostling for attention along the main thoroughfare of the 2015 Milan Expo, the UK pavilion’s Hive, set at the back of its site, is easily missed between the hoops and staves of Hungary’s copper barrel and a large generic timber eatery. But that, according to BDP director Mark Braund, who oversaw the £8 million pavilion’s construction, is the point. In a show crammed with structures of all shapes and sizes overtly vying for attention, artist Wolfgang Buttress’ conceptual piece, drawing attention to the plight of the humble bee, seems counter-intuitively understated.

For those that make it past the timber entrance wall without reading the Perspex explanation boards that slide in and out of their housings like hive frames, the visit may well be bemusing – yet somehow affecting. Past the wall a narrow orchard appears and beyond that a meadow of field flowers stretches away, set within islands of low Corten walls that mark the meandering way to the base of Buttress’s Hive: a fine, complex aluminium structure, elevated on steel struts above a small, circular open space. Stairs either side of the box behind the Hive will guide you up and away to its first floor, past an open bar area, back into it; and from here – the Fibonacci-like structure spiralling up and around you like a swarm – the sense of enclosure, despite all that metal, seems delicate, diaphanous, in constant visual flux with the sky.

Of course, Buttress’s masterstroke was to link the machinations of this structure to his real live hive, sat on a rooftop in Nottingham University and bio-acoustically monitored by physicist and apiarist Dr Martin Bencsik. With his artist’s clarity of vision, Buttress not only highlights the life of an insect whose decimating populations could threaten up to a third of our global plant life, but perhaps suggests parallels between its intrinsically hierarchical social structures – queen, drone, worker – and a capitalist hegemony which replicates those same roles in the human realm.

However, these thoughts may all take a little longer than your visit to sink in. What you’ll see around you is a spherical void carved out of the 17m cube of structure, its limits bounded by hundreds of LEDs flickering erratically, each linked back to Bencsik’s hive sensors, recording the diurnal movements of the bees through it. Sensors there are amplified here through surround-sound state-of-the-art speakers; low droning occasionally augmented by the deep glottal gurgle of the queen. These primal sounds are weaved together seamlessly by Spritualized’s arrangement of violins and harmonicas that builds to a stirring rouse before fading again to nothing.

I have reservations about the ‘dumb box’ of money-making/ conference spaces demanded by the brief and tacked on to the back of the Hive. BDP’s Braund argues that they wanted to maintain an unsullied clarity to the artistic concept; but I felt that in the bigger picture, the considered sublimation of the two might suggest a middle way between capitalistic gain and the destruction of the flora and fauna it results in that Buttress’ installation aims to highlight – here the blanket division is merely symptomatic of the problem itself. That said, its perversity falls far short of the that in the UK’s Seed Cathedral for 2010’s Shanghai Expo, where Thomas Heatherwick drew attention to the fragility of our natural world by specifying over 60,000 plant seeds each set into a 7.5m long acrylic rod – a process that gave the installation a hefty carbon footprint. But while the design strategy for the programmatic separation of the Hive might look perfectly reasonable on paper, I can’t help feeling it was an opportunity for the artist to work in the guise of the architect – to embrace the challenge of the prosaic programme – and to see it differently.

There are perhaps other pavilions here dealing more pragmatically and coherently with the Expo’s theme of ‘Feeding the Planet, Energy for Life’, but they also lack the simple poetry of this concept and the resonant cultural tenor of its understatement. Buttress’ work is indeed so subtle that I wonder whether many of the visitors will even register what it represents – Brits included. But I hope that counts for nothing as you approach at dusk, the daytime sounds of the meadow now still and the Hive’s carved-out sphere glowing within the dissolving cube of structure around it. In that void, 1000 LEDs flickering around you, with euphoric strings drawn out of strange, sub-bass amplifications of nature, I’d like to think you really didn’t care. 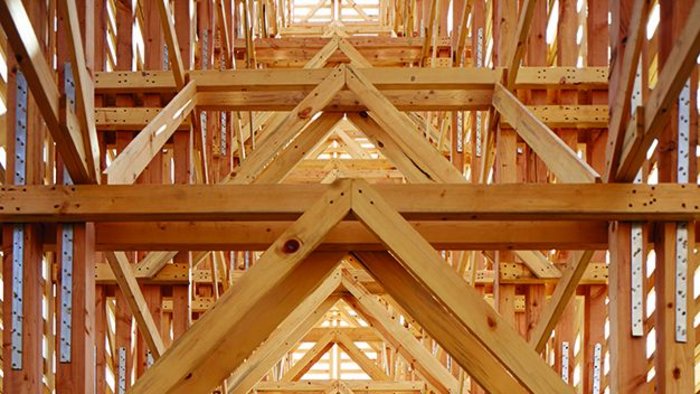 The Mine Pavilion, Biennial of the Americas