Dunne & Raby may defy easy categorisation but their work is guaranteed to make you think. With backgrounds in architecture (Fiona Raby) and industrial design (Anthony Dunne) and a shared focus on computer related design and design interaction, they have spent years using design to stimulate debate about the implications of emerging technologies 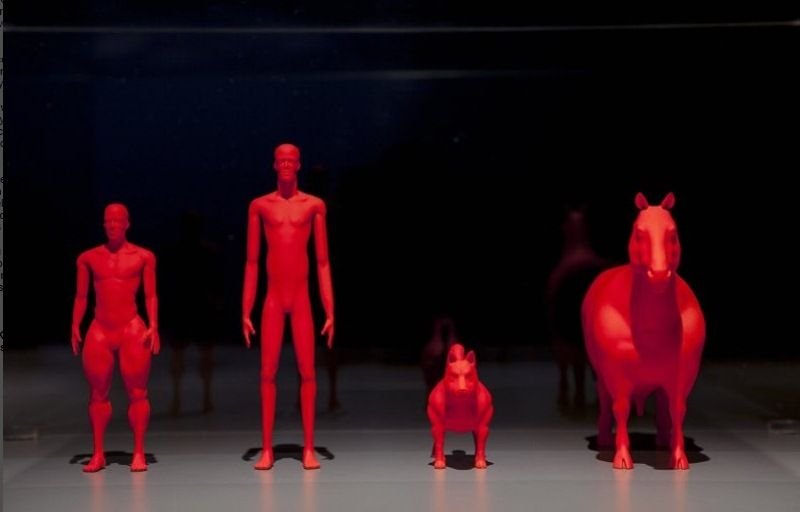 Past projects include Design for Fragile Personalities in Anxious Times (2004/5) which designed objects to humour those fearing alien abduction or nuclear disaster, and an After Life Euthanasia Device  (2009). Their latest exhibition United Micro Kingdoms – A Design Fiction is not so much a design show but an exploration of four different ways of living in the future. And while it is as the title says, a fiction, there is enough resonance with reality to make it uncomfortably close to home.

In the Communo-nuclearist micro kingdom, residents live on a mobile landscape of giant carriages powered by nuclear energy that travels continuously at 4miles per hour. They have all they need for a leisured lifestyle but there are two major downsides to this luxury – the threat of nuclear accident or attack, and the fact that they can never leave – unless they find anyone to replace them. The area around the tracks is a nature wilderness.

The other three imagined societies have very different relationships to technology. Digitarians depend entirely on digital technology within a totalitarian society of surveillance, tagging and data-logging. They get around in different types of basic, no frills, Digicars which calculate the most efficient routes and drive themselves.

Bioliberals however embrace biotechnology and use it to respond to their own needs. Transport is via light but messy, organically grown Biocars powered by anaerobic digesters and fuel cells.

Instead of concentrating on technology, Anarcho-evolutionists use science to maximize human potential and explore how they can modify themselves to better suit the planet’s needs and resources. Transport is communal via balloons or a Very Large Bike – a wheeled vehicle for many people which can carry the elderly, very young and those unable to pedal.  Eventually, cyclists’ physiques will become more muscular, while others such as balloonists will become more willowy. Animals will be specially bred to suit human’s needs.

With most of the content available online, the only reason for going in person to this small but thought-provoking show is the scale models that bring the theory to life – the nuclear-powered train, cars of Digitarians and Bioliberals, and the communal VLB of the Anarcho-evolutionists.

How would you rather live? None of these kingdoms really appeal to me, but as world resources are pressurised by rising populations and environmental changes, there’s no doubt that ways of life will have to drastically change, and if not in the ways explored here, then in others even less palatable.