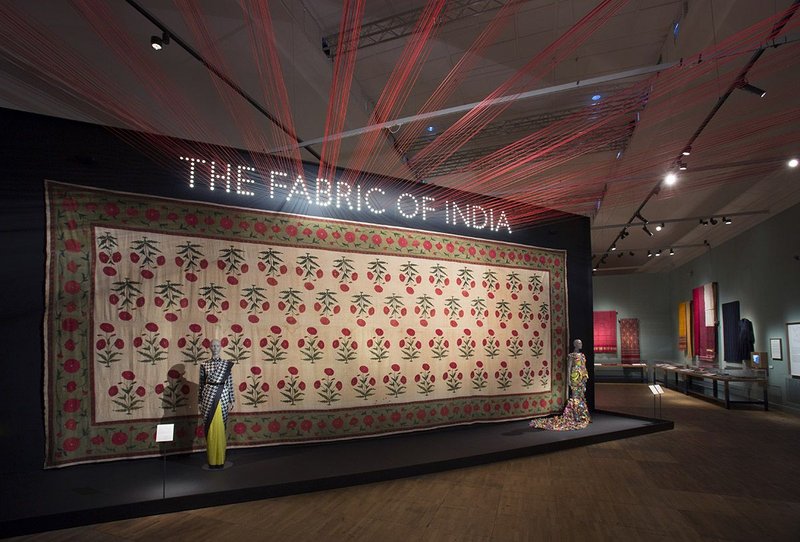 Installation view of The Fabric of India at the V&A. Credit: Victoria and Albert Museum, London

The Fabric of India is pure colour therapy. From the stunning poppy-patterned carpet at the entrance to the designer saris at the end, the V&A’s new exhibition is saturated in rich colours, lively pattern and exquisite detailing. When I emerged from the museum afterwards, South Kensington seemed markedly pale and drab by comparison, despite the Indian summer weather.

The exhibition has a very wide scope, exploring not only the materials and processes of handmade textiles in India but their roles in religious devotion, as objects of wealth and power, and in international trade. Exhibits range from ancient fragments of patterned textiles several thousand years old right up to some amazing contemporary expressions by Indian fashion designers.

I certainly learnt a great deal about the intricate, often ancient processes behind the 200-plus exhibits, from different types of fabric through to dyes and dyeing, patterning, stitching and other embellishment. Film footage is interspersed with the raw materials and finished textiles to great effect. The silk worm story is particularly engaging – incredible that it can take up to 4000 cocoons to make just one silk shawl. The richness of detail and material is evident throughout.

Aside from the sheer virtuosity of the textiles on display and the stories of how they were worn and used, the exhibition is fascinating for its account of their international popularity. From centuries before the Europeans established their own trade routes, Indian textiles were traded as far afield as Africa, the Middle East and Japan. Indeed in Ancient Greece and Babylon, the word India was shorthand for cotton. We learn of the northern European craze for ‘chintz’ in the 18th century that had society ladies sporting Indian bandannas as traditional motifs were reinterpreted for a new audience.

A relatively small but important section looks at how the textiles took on a political significance when cheap imported textiles produced in Lancashire mills threatened the livelihoods of countless thousands of spinners and weavers in India. There were mass spinning protests and Indian nationalists incorporated the spinning wheel into their flag. Mahatma Gandhi himself learned to spin.

Post-independence exhibits consider attempts to protect and nurture the hand-made textile traditions. Creations by contemporary fashion designers bring the subject right up to date with some intriguing takes on the traditional sari, including Kallol Datta’s Suicide Print, and, at the beginning of the show, Manish Arora’s fabulous satin, silk and vinyl butterfly dress.

Gitta Gschwendtner has done a great job on the exhibition design, starting at the entrance set piece where thick red cords spread out from the exhibition title lettering above visitors’ heads. More red threads – symbolic of Indian textiles - are used vertically to create a red-lined passage to navigate the potentially awkward transition to the second series of exhibition spaces, as well as on a map to illustrate trade routes.  The atmosphere is enhanced by a specially commissioned soundtrack by composer Jason Singh. A treat in autumn, this colour shot will be even more of a tonic in the depths of a cold English winter.