If you're finding politics extreme, try the Royal Academy's What is Radical Today? for some really edgy ideas

A plant parliament that gives a voice to the botanical world, a sobering image of London drowning in rising water, Jacob Rees-Mogg’s home transformed into a waste-processing plant, all have been put forward as visions of the radical in the Royal Academy’s small but stimulating new architecture display What is Radical Today?

Curator Gonzalo Herrero Delicado invited more than 40 architects, artists, designers and creatives from all over the world to present their visions of what is radical in architecture today. Some are emerging architects and some are more established, while others, such as Peter Cook, have impressive radical pedigrees dating back half a century.

Delicado feels that since that time 50 years ago, when architects were proposing bold visions for Walking Cities (Archigram), and large-scale support system grids (Superstudio) the profession may have rather lost its way in terms of radicalism.

‘We don’t know why that is,’ he says, wondering whether architects feel they no longer have any agency. The exhibition is an attempt, at a critical moment in terms of the climate emergency, to reveal the radical thoughts of today.

So does it shed any light? According to Delicado, contemporary radical visions have moved away from the design expression of the 1960s and 70s, when there was a specific aesthetic of being radical.

‘There are many different ways of being radical,’ he says. ‘Right now, it doesn’t have to be through buildings or installations. You can be radical by raising awareness on specific issues, or doing a small pavilion, or communicating an idea to the general public.’

A recurring theme is unease with the production of new-build architecture in the current environmental crisis, and a consideration instead of re-use.

For him, radical is never apolitical: ‘It takes responsibility and insists ‘no’ to complicity,’ he says. His visual London’s Drowning, a depiction of a semi-submerged Barbican, is both striking and troubling.

The contribution from Aaron Betsky and Jan Sobotka, To Reuse is Radical, advocates the reworking of existing structures for the future rather than new build: ‘we must unbuild’.

Izaskun Chinchilla focuses on the circular economy, and asks why using reclaimed and recycled materials is still a marginal practice: ‘We need to materially, conceptually and culturally reshape and accept that a design process can also start with an object instead of a drawing.’

While Sam Jacob’s vision of Rees-Mogg’s house being turned into a waste processing plant in 2050 is an amusing notion in itself, it serves to illustrate Jacob’s broader point that history should be productive and useful for the future.

Several others in the exhibition interpret the question of what’s radical by trying to re-define the role of architects today.

Maria Smith of Interrobang makes a plea for architects to collaborate more with their design team colleagues. She warns against the silo approach to design in favour of collaboration across the disciplines. Otherwise, she says, the results are too often ‘fatuous monsters’. In an era of climate emergency, she adds, we can’t afford to ‘squander good ideas’ in this way.

In this, ‘the radical architect’s role morphs into a policy maker, educator, self-initiator or developer, depending on every local need.’

Liza Fior of muf architecture/art urges architects to keep above the line of compromise in her exhibit Architecture not (as) Fund Management, in order to ‘contribute’ rather than be complicit. This includes a wooden door wedge to illustrate her call for: ‘Architecture which wedges the door open for the users (over the funders)’.

According to Holly Lewis of We Made That, architects need to be explicit about their moral and ethical decisions – there can be no grey areas. She’s leading the way with Things We Won’t Do, a wide-ranging manifesto on how to live and work, including not designing poor doors, not exploiting students and not leaving a place with fewer trees than before the project started. There’s even another reference to JRM: (We won’t) Follow Jacob Rees-Mogg’s grammar rules.

As well as the manifestos and musings on the role of the architect, there were still some fantastic visions. Paul Allen and CJ Lim of Studio 8 Architects contributed Twenty Thousand Habitats Above the Sea, conceived as humanitarian relief infrastructure for those displaced by rising sea levels. Dong-Ping and Virgil Abloh’s Nature City was designed in 15 minutes live on stage at a conference as a ‘fun’ and ‘hopeful’ vision of a more spiritual, equal and open city, and includes a dome (‘because it’s the future’) plus sky forests and lakes, and a floating wind farm.

Delicado was surprised, for a radical-themed show, that the participants were so obedient to the single piece of A3 format. Just a few rebelled, including Anna Heringer, who commissioned embroidery from a women’s collective in Bangladesh. Giogia Scognamiglio & Lorenzo Zandri’s Urgente contribution of a pile of postcards intended to promote a more meaningful, slower experience of travel and place.

This is a real mixed bag of a display, full of ideas – some more radical and substantial than others – and well worth a visit. 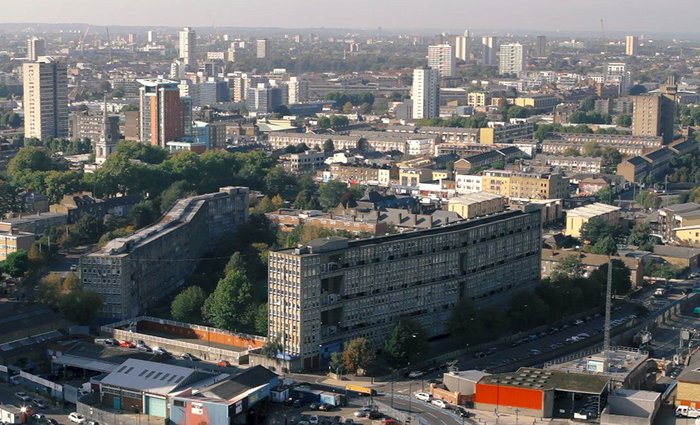