Rem Koolhaas is the ultimate marmite man: love him or hate him, we need the way he challenges and questions

There is a moment in the documentary film ‘Rem’ made by his son Tomas Koolhaas, when the tall, angular Dutchman, being filmed around the tall, angular anti-skyscraper of his CCTV headquarters in Beijing, finds himself nabbed by a delightedly smiling Chinese girl half his height and made to pose with her for a photo. Rem’s habitual air of abstracted melancholy remains unaltered by the incident: he merely stops moving briefly, suffers the photo, and moves on. The voiceover at this point is Rem saying of CCTV: ‘It’s a building that only a European could think of, and only the Chinese could have built.’ Which sounds great, until you think about it a bit, and realise it might also sound suspiciously like nonsense. That’s Rem, revered as a seer by some, reviled as a charlatan by others. The same film includes interviews with superstar musician/businessman Kanye West – a client for a pavilion in Cannes – and a homeless man who spends a lot of time in OMA’s Seattle Public Library. So, another client, another Rem fan.

Now 70, he is the seemingly reluctant architect and theorist who – backed by the formidably powerful Office of Metropolitan Architecture which he co-founded – builds all over the world. And this year he brings his particular brand of provocation to the directorship of the Venice Biennale (see page 50). We know only selected details of his personal life – born in Rotterdam in 1944, moved to Indonesia with his cultural-critic father and family aged eight, back to the Netherlands, early work as a journalist and screenwriter, then on to the AA in London in the delirious late 1960s to hook up with the Bernard Tschumi/Zaha Hadid generation. But it is unarguable that Rem is important. He fills a great need in architecture: to question, challenge, and make eyebrow-raising utterances.

At times you get the impression that even he finds it odd that he attracts so much attention. He comes across as socially awkward as well as physically gawky, a tall thin man seemingly not quite at ease in his own body. He fidgets. Habitually stern-faced verging on anxious-looking, it is a bit frightening when he smiles, only because this seems to be seldom, making our portrait photo all the rarer. He will certainly never win any prizes for his soporifically soft-voiced manner of public speaking, though the faithful flock to hear him nonetheless. He could be accused of deliberately cultivating an air of mystery around himself, though that could just be a form of shyness or introversion. One thing, though: he has said he thinks people miss the irony and humour in his work – written and built. This suggests that he thinks he can be taken too seriously. And this is encouraging. 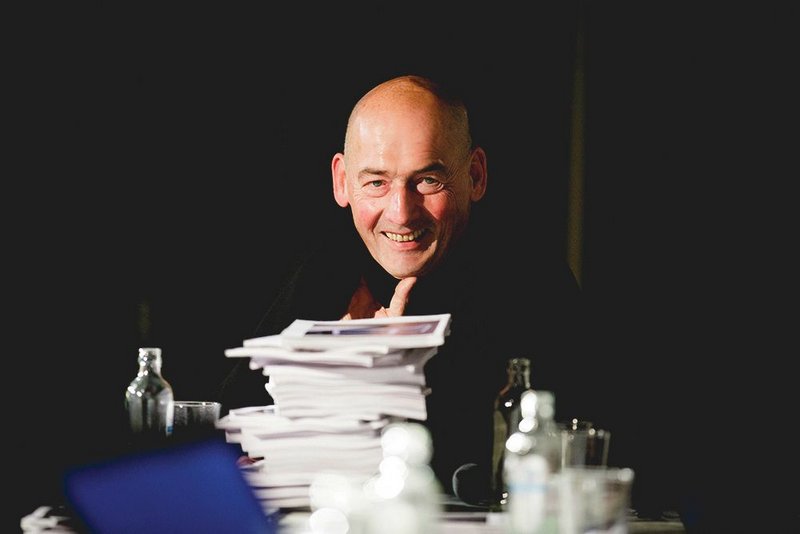 It helps to imagine Rem’s chiselled skull as the Casa da Musica: mysterious and unknowable on the outside, richly and eccentrically ornamented within

At a packed-out lecture in London once – and how many other architects could fill the Queen Elizabeth Hall’s 900 seats? – a frustrated student tried to break through his reserve by asking him what football team he supported. A long, long pause ensued, only for Rem to pronounce, ‘That depends’. Thanks for the insight, maestro. Then again, he might just have been wryly playing up to his humourless-intellectual image.

He is the only director of the Venice Biennale in recent years to have demanded and got not only a longer Venice Biennale than usual – nearly six months – but also a much longer lead-in time. Normally the very existence of the show is confirmed so late that is  a mad dash for the director’s team to pull together, and all that effort gets a relatively short showing. One suspects only Rem could have dictated his own terms in this way.

Here are the basic facts. Koolhaas founded OMA in 1975 with Elia and Zoe Zenghelis and Madelon Vriesendorp, his wife. The older Elia Zenghelis was one of his tutors at the AA, and these four all contributed to his 1971 AA thesis project ‘Exodus: the voluntary prisoners of architecture’ in which the curious isolated-but-free status of West Berlin was applied to a linear walled city-within-a-city that happened to be London. Over time the other founders fell away, in later years younger partners such as Ellen van Loon and Reinier de Graaf came to the fore, but Rem ruled the roost from the early days. The model-strewn OMA office in its anonymous postwar block is a hothouse that has produced other notable architects, among them his AA near-contemporary Zaha Hadid, Joshua Prince-Ramus of REX in New York, Ole Scheeren in Beijing, Julian de Smedt in Brussels, Bjarke Ingels of BIG in Copenhagen. All of them rather successful, and none of them exactly shrinking violets.

Completed buildings are only ever a part of his output – let us not forget AMO, the theoretical arm of OMA – but those buildings are among the most significant of our time. Among them are the 1980s Netherlands Dance Theatre in the Hague, the 1990s masterplan and Grand Palais for Euralille, and a clutch of steadily larger projects in the 2000s including the Seattle Central Library, the immense CCTV building in Beijing, and – a personal favourite of mine for all its oddnesses – the faceted Casa da Musica in Porto where the smooth concrete and glass exterior gives way to richly textured, coloured and patterned interiors, often by collaborators, including tilework that pays homage to the craft traditions of both the Netherlands and Portugal. It helps to imagine Rem’s chiselled skull as the Casa da Musica: mysterious and unknowable on the outside, richly and eccentrically ornamented within.

He has said he thinks people miss the irony and humour in his work – written and built. This suggests that he thinks he can be taken too seriously

There is, however, always an element of deliberate perversity in Koolhaas’s buildings – either an avoidance at all costs of the conventional or obvious solution, or the ironic embrace of exactly that. In perverse vein, Porto is notable for its absence of normal large foyer spaces, leading to a warren-like interior feel. Externally the mute exterior makes no attempt to physically open up to the public square it sits in, instead presenting you with a daunting staircase entrance. Rather than icons (CCTV notwithstanding), Koolhaas produces anti-icons, which leads him sometimes to the deliberately mundane. Consider the cladding details of his Roths­child HQ in the City of London, wrenched from the banal by its ultra-hierarchical ‘sky pavilion’. Consider too a recent building that has divided the critics, the mighty ‘de Rotterdam’ complex in Rem’s home city – where a bout of value engineering early on in its long history removed the variety of cladding ­materials originally proposed to define the elements of the buildings. The design also ballooned in size, and so OMA decided to make a virtue of acres of a standard cladding system. The result is (for me) strangely impressive, the conjoined towers on their concrete plinth commanding the water’s edge like Easter
Island statues, effortlessly superior to the work of other world-famous architects alongside including Foster, Piano and Siza.

But Koolhaas is known as much for his writings as his building, be it Delirious New York (1972-6, with Vriesendorp’s famous illustrations) and the massive S,M,L,XL in 1995 – so graphically different from any other architectural publication up to that point as to redefine the whole nature of the business – though one wonders how much it is actually read, it has Bible-like status.

Koolhaas leads. You may hate his manner and pronouncements, but he puts in the research and when he pronounces on a topic, be assured that it is about to get hot. Be it the Gulf, the Far East, East Africa, shopping, or conservation, Koolhaas exposes the essence of his subject always on the off-beat. So while everyone is talking about the future of cities, his present much trailed research project is the idea of the ‘countryside’. That, from a Dutchman, will be interesting indeed.