Zaha Hadid Architects have confirmed that Dame Zaha Hadid DBE died suddenly in Miami in the early hours of 31 March. She had contracted bronchitis earlier this week and suffered a sudden heart attack while being treated in hospital.

Zaha Hadid was widely regarded to be the greatest female architect working in the world today and became the first woman to be awarded the Pritzker Architecture Prize in 2004. She twice won the UK’s most prestigious architecture award, the RIBA Stirling Prize: in 2010 for the MAXXI Museum in Rome and the next year for her dramatic Evelyn Grace Academy in London, a design that celebrated its users and programme on a very tight urban site. Only this year she received the 2016 RIBA Royal Gold Medal for architecture.

Speaking today, RIBA president Jane Duncan said: ‘This is absolutely terrible news. Dame Zaha Hadid was an inspirational woman, and the kind of architect one can only dream of being. Visionary and highly experimental, her legacy, despite her young age, is formidable. She leaves behind a body of work from buildings to furniture, footwear and cars, that delight and astound people all around the world. It was only last month that I had the enviable task of awarding Zaha the 2016 Royal Gold Medal for architecture – she was delighted to receive the recognition and adds the medal to an amazing collection of awards… the world of architecture has lost a star today.’

Born in Baghdad in 1950, Hadid studied mathematics at the American University of Beirut before studying architecture from 1972 at the Architectural Association. After working for the Office of Metropolitan Architecture, in 1979 she established her own practice in London – Zaha Hadid Architects – garnering a reputation for her ground-breaking theoretical works including The Peak in Hong Kong (1983), the Kurfürstendamm in Berlin (1986) and the Cardiff Bay Opera House in Wales (1994).

Hadid’s first major built commission was the Vitra Fire Station in Weil Am Rhein, Germany (1993); subsequent notable projects were the Phaeno Science Centre in Wolfsburg, Germany (2005), the London Aquatics Centre for the 2012 Olympic Games (2011) and the Heydar Aliyev Centre in Baku (2013), illustrating, along with office partner Patrik Schumacher, her quest for complex, fluid spaces defined by advanced design, materials and processes.

Zaha Hadid’s other awards included the Republic of France’s Commandeur de l’Ordre des Arts et des Lettres, Japan’s Praemium Imperiale and in 2012 she was made a Dame Commander of the Order of the British Empire.  She was an honorary member of the American Academy of Arts and Letters and Fellow of the American Institute of Architecture.

In his very personal RIBA Gold Medal citation, Sir Peter Cook said of her: ‘We realise that Kenzo Tange and Frank Lloyd Wright could not have drawn every line or checked every joint, yet Zaha shares with them the precious role of towering, distinctive and relentless influence upon all around her that sets the results apart from the norm. Such self-confidence… causes some architects to feel uncomfortable; maybe they’re secretly jealous of her unquestionable talent. Let’s face it, we might have awarded the medal to a worthy, comfortable character. We didn’t, we awarded it to Zaha: larger than life, bold as brass and certainly on the case.

RIBAJ editor Hugh Pearman remembers her with fondness and very slight trepidation, saying: ‘Zaha was caustic, funny, awkward even – yet she had amazing presence. I think she was the most brilliant architect of her generation; and with the roll call of names she was alongside, it was quite a generation.’

Details of Zaha Hadid’s memorial service will be announced shortly.

Messages of condolences can be sent to: pa@zaha-hadid.com 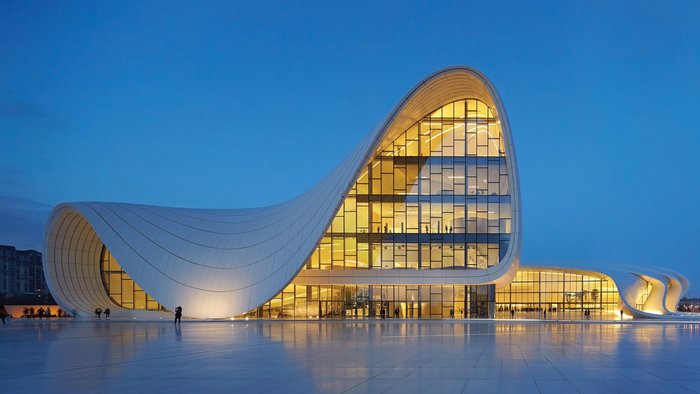