Spring snow and regional shift in activity cloud the picture, but architects’ prospects are good 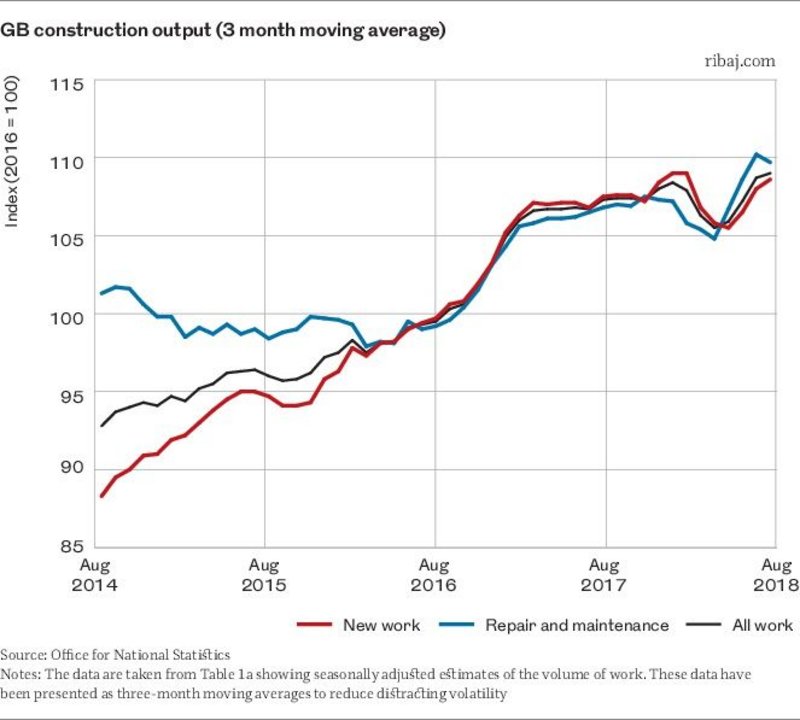 Curate’s egg is the term many might seize upon to describe the latest round of construction data. But it’s not that simple. Working out the good signs and the bad signs is that bit tougher than normal.

A couple of the factors are confusing any interpretation. The first is the impact of a rather nasty spell of weather earlier in the year, which shut down a large part of the economy for a few days.

The rise in activity from April to July (despite a wee dip in output in August) looks very positive – but we don’t have enough data to work out how much is just the expected bounce-back from the slow-down as snow-bound Britain struggled to get to work earlier in the year.

Chart 1 shows clearly how a lump was cut out of the scheduled workload. Plenty of firms will have had to pick up the pace of activity on sites to make up for lost time. This clouds any interpretation, because on many jobs the pace may ease back once the backlog is cleared. Maybe the dip in autumn is a sign of that – maybe not. 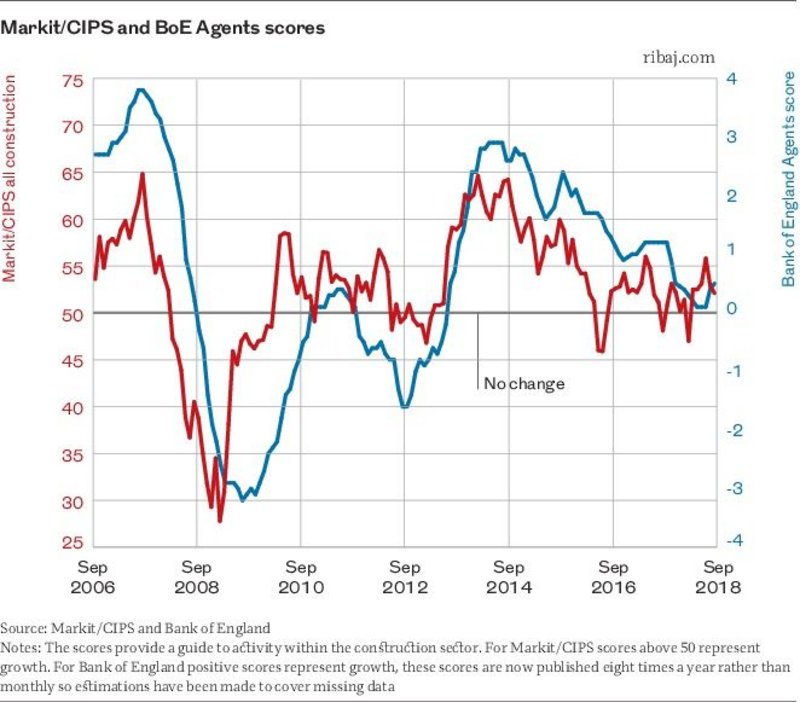 This short-term dip and swift recovery can be seen in both the Markit survey and the scores for construction provided by the Bank of England agents that talk to businesses up and down the country (Chart 2). Both hint at a bounce-back after a dip earlier in the year. Again, we don’t know what might be down to underlying growth and what might be making up lost ground – which could indeed disguise an underlying slippage in workloads.

More encouragingly, while the same trend can be found in activity among suppliers, the growth seems to have been sustained through to the third quarter. The latest Construction Products Association state of trade survey shows that after a snow-related pause in 2018 Q1 activity, and a bounce-back in Q2, manufacturers’ responses in Q3 painted a positive picture. 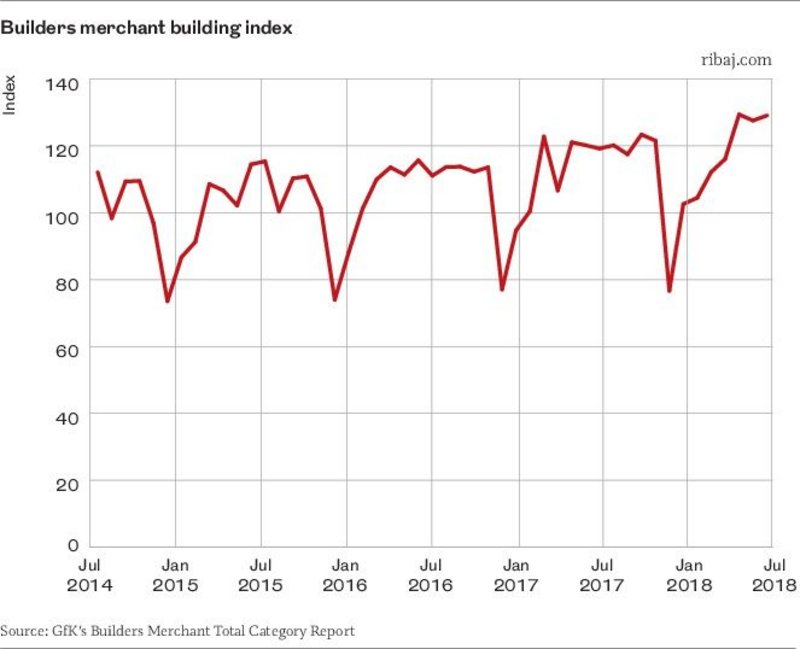 As orders won by materials suppliers generally run ahead of activity on sites, this gives some hope to improvements in overall construction activity continuing through this year. This finding is supported by survey results from builders’ merchants. Chart 3 show the Builders Merchant Building Index which, after a delayed recovery from winter trading, hit some high notes in the summer.

But when seeking to interpret the data there is still the problem of how much of the summer surge to allocate to underlying growth, which would be a positive sign, and how much to put down to catching up. So we have to judge the figures with caution. 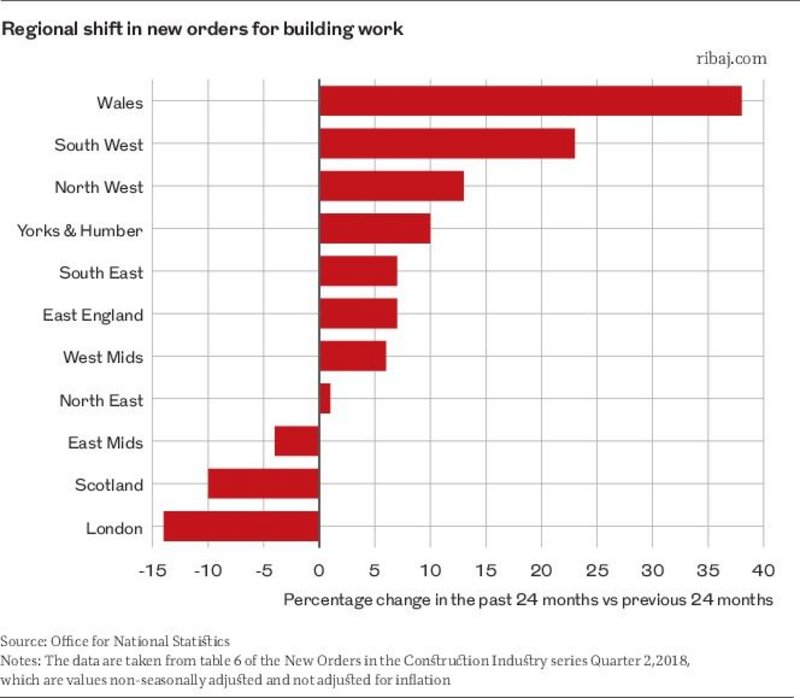 The second issue clouding the data is that we appear to be witnessing a regional shift in activity, with London, previously the driver, slowing as other parts of Britain are growing. If we look at Chart 4, which compares orders over the 24-month period starting July 2016 with the 24 months starting July 2014, we can see how much of a shift is occurring in new building work (that excludes the infrastructure sector) being won in each region.

Remember, this is work being added to order books, so it doesn’t directly represent the amount of work being undertaken. It is, though, a good indication of what’s likely to happen down the line.

Broadly we can suggest that things are looking up in Wales and the South West and in the North of England, while the pipeline in London is not likely to provide work as freely as it had been. But, looked at on a national level, it is tricky to work out the timings and scale of the changes to assess whether there is enough impetus in the growing regions to make up for loss of work in the regions where orders are falling, particularly London.

More importantly, we don’t know, when looking to the slightly longer term, whether the slowdown in London is a purely regional event or whether it is a harbinger of falls spreading out across the country.

And, at a more anecdotal level, we are likely to be getting a much more mixed bag of responses from different firms across the nation, which itself can create a bit of confusion in interpreting what’s happening. Here, a third confusing factor also comes into play – there will be differing patterns of growth between the different workload sectors. 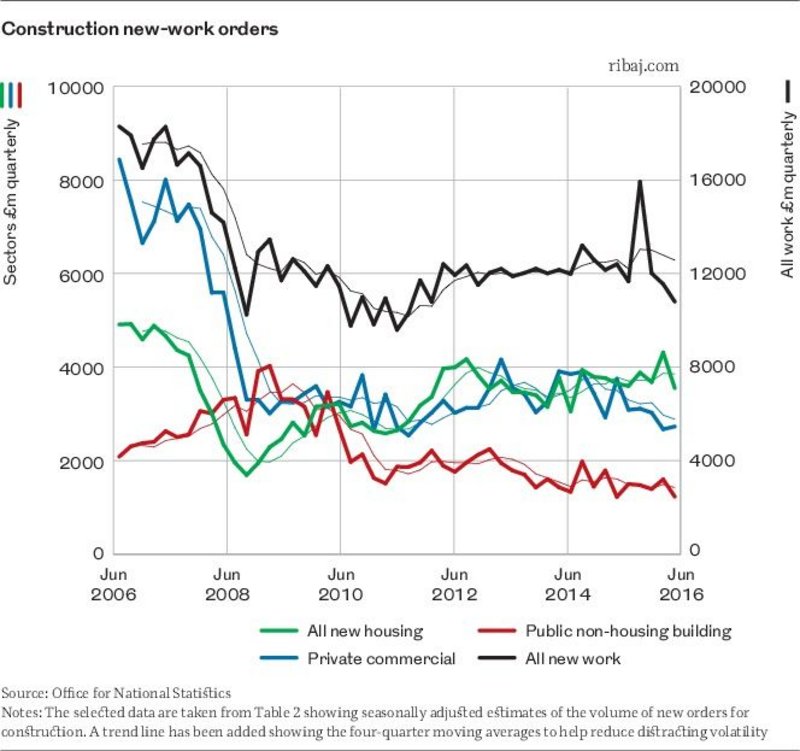 Chart 5 shows the changing fortunes of the public non-housing building and private commercial sectors and the housing sector, as far as new work orders are concerned. Housing is rather propping up the show.

That housing should be the main driver seems reasonable given that the pressure to build more homes. But, a word of warning here, when looking at the prospects for construction it is all too easy to confuse need with effective demand.

Yes, we may need more homes, indeed we need better infrastructure and cleaner energy sources. There is a seemingly an overwhelming case for all these improvements to the built environment and all the political noises seem to support this view. Sadly, that doesn’t mean we will necessarily see more activity here.

Building homes may be a ‘top of the agenda’ domestic political issue and making the built environment less environmentally destructive may be a planet-saving necessity but, as the saying goes, fine words butter no parsnips.

Need translates to demand, pretty much, when the money is put in place. So, ultimately the biggest driver of construction output tends to be a buoyant economy.

To make a sensible stab at what the latest figures might be telling us we really need to set them in an economic context. It will be no surprise that the context is not particularly rosy, at least not as rosy as two to three years ago.

And while it feels almost rude to raise Brexit and the uncertainty that surrounds it, the effect is inevitably to delay investment decision making, with delays likely to rise as we get closer to crunch day. Given the long-term commitments required for most construction projects, we might reasonably expect this effect to be more prominent in construction than in many other parts of the economy.

Leaving further scrutiny of Brexit well alone, history tells us that the relationship between the GDP measure of economic growth – for all its faults – and construction activity is very intimate indeed. In the absence of other data, it does provide us with a reasonable guide to expectations for construction. 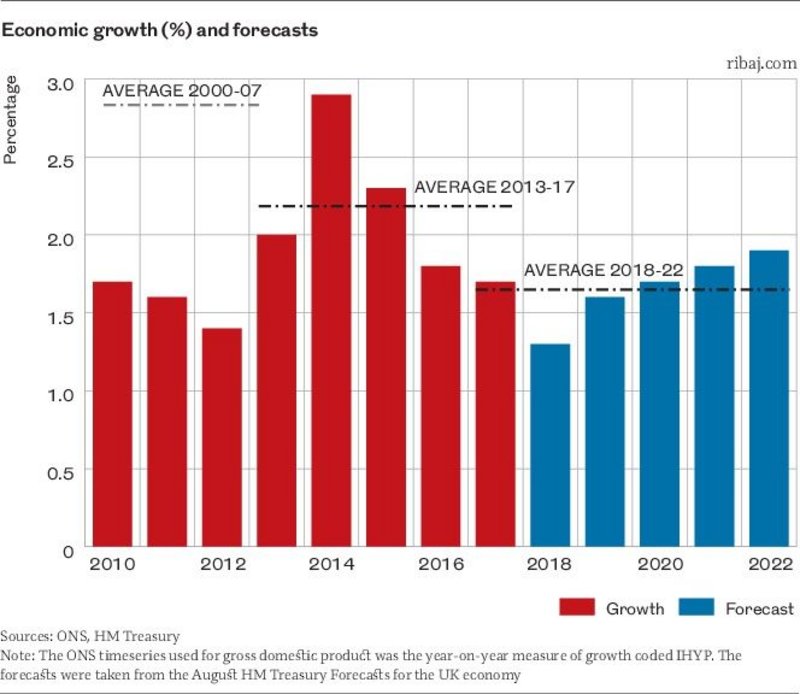 So, Chart 6 probably tells us a lot. This illustrates the trend in economic growth from 2010 with a consensus of independent forecasts compiled by HM Treasury. The red line dotted line shows average growth in the period before the recession. The green line shows growth between 2013 and 2017. The black line shows the expected growth between 2018 and 2022.

Things may well turn out better than expected. But, on this showing, they will need to turn out very much better if we are not to witness a rather dreary period in construction. This view we see in the latest forecasts. 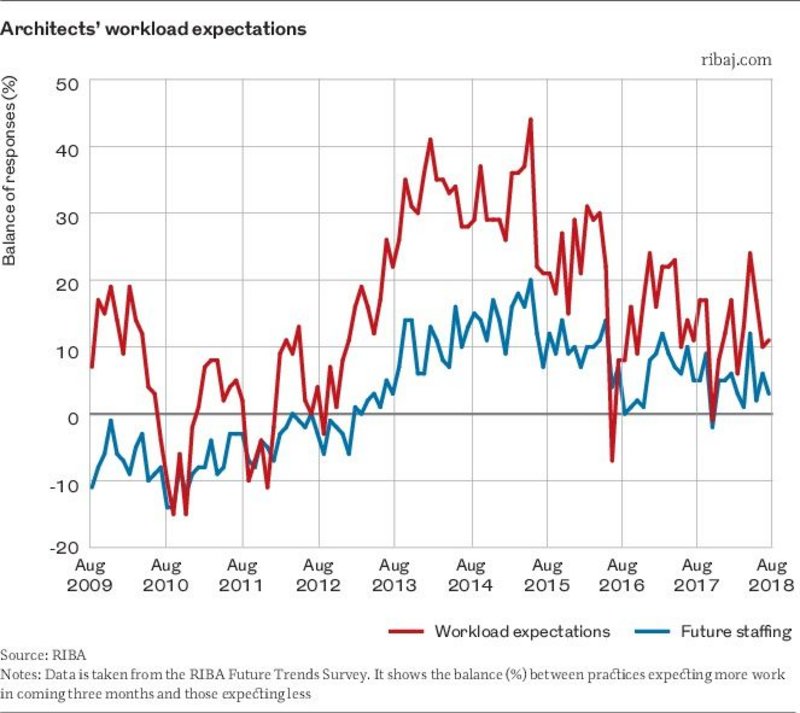 The Construction Products Association, for instance, sees a growth of just 0.1% this year, 0.6% next year and just 1.9% in 2020. Given that level of growth and the mix of growth rates, there will be many feeling a little uneasy for a while to come.

But, for the time being at least, it seems architects are enjoying better eggs than the one put before the curate. Yes, there will be those getting twitchy about future workloads, particularly in the London and the South East. Yet overall the workload prospects for architects seem to be running above those of the construction sector generally – and over the long run this has tended to hold true.