With a new urban centre, Evans Vettori has given Nottingham Trent University dignity and cohesion 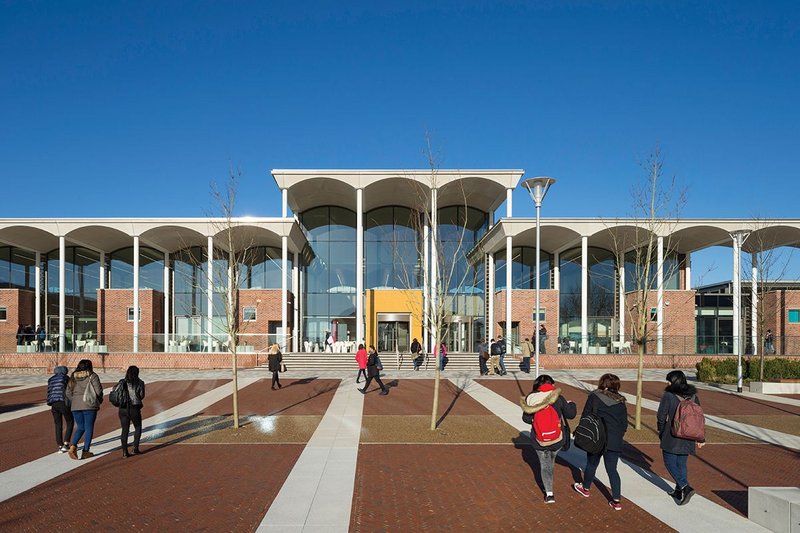 A historically proven way to urbanise an ad-hoc collection of structures: the piazza with flanking buildings and colonnade. Credit: Martine Hamilton Knight

There’s a familiar pattern at universities, especially those with inherited older post-war campuses: the need to tie together or replace disparate, much-modified older buildings while providing new central facilities for greater numbers of increasingly demanding students. The other requirement is for architecture of stature: buildings that attract and keep people, students and staff alike, in what is a highly competitive market. The new complex at Nottingham Trent University’s Clifton campus by Evans Vettori demonstrates how to achieve this bundle of objectives through a rigorously urbanistic, essentially neoclassical approach.

Beginning life as a low-budget college of further education in the early 1960s, complete with student residences in low barrack-like blocks, the campus sits on exposed high ground south of the Trent outside the city, next to the huge postwar council-housing suburb of Clifton. It went through all the usual changes and mergers before emerging as part of one of the new universities introduced in 1992 by John Major’s government. Its overall history, trajectory and present-day requirements are remarkably similar to that of another high-ranking former polytechnic, Oxford Brookes.

Faced with the usual jumble of unsuitable time-expired buildings and architecturally regrettable more recent ones, all laid out on two clashing grids which probably originated from the lie of the land, the architects reached for an ancient, effective means of urban reconciliation: piazza and colonnade. The landscaped space resolves the clashing grids by being triangular, while the tall L-plan colonnade defines the principal edges of the space, and links three buildings (central pavilion, teaching block at right angles to it, and a retained, much-altered refectory). The colonnade provides sheltered outside circulation while the piazza – laid out on the module of the new buildings – says ‘centre’. This is about much more than new facilities and low-energy buildings. The word Robert Evans of Evans Vettori uses is ‘gravitas’. Although he doesn’t say it, another might be ‘materiality’. This is a tactile place.

On a windy, sporadically wet winter’s day, arriving by bus from the city centre as the students do, I found that the place plainly operates well as the intended social and pedagogical condenser. The university’s project manager Craig Smith makes the point that British universities are predominantly winter places – it’s only a transient population in the summer months – so it’s precisely such conditions you need to design for. He adds that the new architecture of the campus is so self-explanatory as to make signage almost redundant. Since the main run of buildings was completed in January, the students have colonised its various spaces naturally.

Accommodation is the customary list – such campus upgrades typically include everything from internet-connected study spaces of various sizes and degrees of privacy and formality, through flexible lecture theatres, teaching rooms and libraries to better cafés and restaurants. All of these are addressed here with considerable verve, intelligence and charm. The 2,000m2 pavilion building with its slightly raised entrance portal is the campus gateway, and houses the more informal spaces plus glass-walled teaching rooms on a mezzanine. The equally-sized new teaching block is just that – a run of large lecture theatres above, entered from colonnade level, and a variety of teaching rooms below, divided by some very impressive automated acoustic sliding walls. A broad pedestrian way through this block to the outlying campus also runs below colonnade level: originally intended to be open, it now takes the form of a very large draught lobby to avoid becoming a west-east wind tunnel.

The overall composition is all about smooth pale precast concrete vaults, white-painted steel columns and – in this redbrick city - textured and patterned brickwork, though in softer shades. Rhythm is established by the march of the colonnade on the 4.5m module, stretching to nearly 100m where it strides on beyond the central pavilion to absorb the former concrete-framed refectory, now given added height and daylight via a generous clerestory. Where the colonnade turns the corner and runs in front of the teaching block, this is done with just one extruded module, so the vaulting runs in one direction throughout. So the teaching block does not feature the vaulted roofscape that is such a feature of the Pavilion building on its two levels: instead, more straightforward concrete planks are used. Where the land falls away at the southern end of the teaching block, the colonnade terminates with a broad staircase of civic dimensions; level access is provided at other points.

On the pavilion side, that long colonnade could have seemed somewhat relentless if unrelieved – nor did the architect want an airport-lounge feel. So the columns are given a counterpoint in the form of brick boxes that break through the facade glazing system. On the inside, these are cosy study booths with screens and a window. Outside, a little seating notch is made in alternating cubes, lined with glazed brick in various colours. The central entrance cube adopts the same language but is clad overall in a yellow-glazed brick. In one or two places there are infelicitous details, probably arising from the design-build nature of the project. Cheap concrete copings to the brick-box rooms along the main facade – highly visible from the mezzanine within – are a shame in this otherwise very refined space with its luxurious floor of fossiliferous limestone, for instance. But there aren’t too many instances like that. 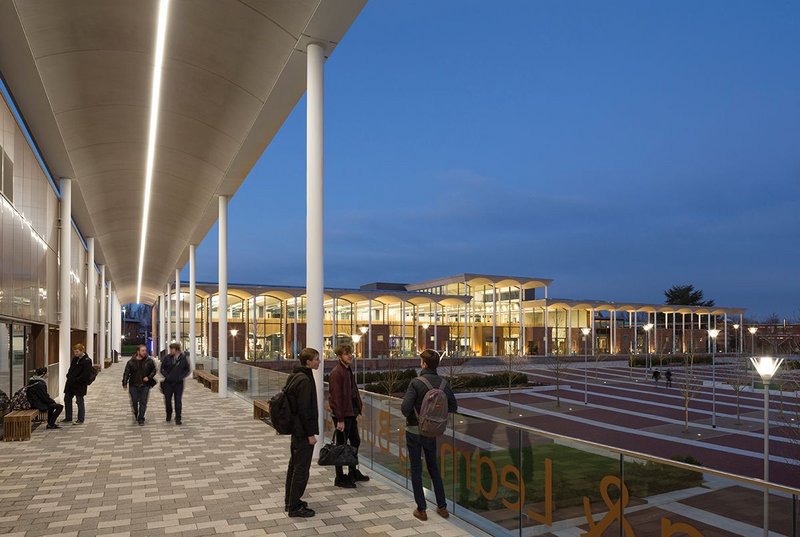 Precast concrete vaults define the buildings and extend to form the colonnades: one is extruded along the terrace of the teaching block. Credit: Martine Hamilton Knight

In all 370 precast vault units were used, in various configurations. Of course, a perpetual challenge of exposed-structure buildings is where to place the services if you want to leave the vaults uncluttered. Here this is done by turning the service zones vertically. In the case of the naturally-ventilated Pavilion, a shallow service zone runs along the front face of the mezzanine, disguised by timber ribbing. In the mechanically-ventilated teaching block, a bigger service zone sits behind a copper-clad wall beneath the colonnade, while inside the lecture rooms air moves through perforated brick walls at the front of the spaces.

The architect clearly relished the chance to detail brickwork to blank or partly blank elevations caused by large spaces behind: the rear elevations of both new blocks show just how to make infill panels interesting. Meanwhile at the other end of the new complex, the re-use of the existing refectory structure, modified with its new lantern roof and absorbed into the overall aesthetic, is exemplary. Total demolition is by no means always the answer: lateral thinking here saved both time and money and helped towards the overall BREEAM ‘Excellent’ rating, dropping only to ‘Very good’ for the teaching block.

There is something of the feel of Basil Spence’s Sussex University here, and Evans is happy to acknowledge another influence in the layout of the piazza – the similarly modular brick-paved space outside the British Library by Sandy Wilson. Both those places certainly have the gravitas that Evans was after. Finally the new buildings start to define other spaces away from the main square: quads emerge between them and the surrounding buildings. In particular this involves the last part of this project still to be completed – a link between the pavilion and the refurbished library.

Nearly a quarter of a century since Nottingham Trent won university status, its Clifton campus has a centre that feels appropriate and goes well beyond mere provision of updated facilities. It looks and acts the part.