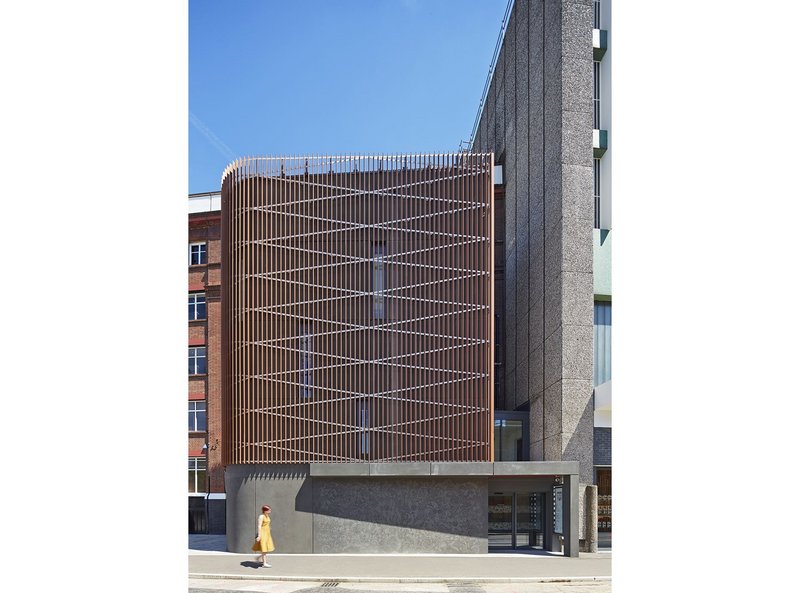 Gin and gas define this intervention from Edinburgh-based Lee Boyd at the Beefeater Distillery in Kennington, south London. Working with designer Four-by-Two the practice was brought in to link the two buildings of the last major gin distillery in London and to create an entrance for the new visitor attraction.

Early designs were expressive, with folded terne coated steel suggesting gin being poured into a glass. But a new lead client took it back to a more pared down look. And by the time it got to consultation with the Health and Safety Executive, Lee Boyd director Alan Thomson found himself relieved that this was the option he was defending against HSE fears over increasing visitor numbers near a gasometer. The dark concrete panels might be inherently non-combustible but the glass had to be 35-40mm thick with heavily worked up detail and roller shutters.

Galleries are linked by the slim building to the 19th century Stills House, where guests end their tour with a gin and tonic while standing on a glass ceiling above the gin stills themselves. Visitors are drawn into the building under the canopy and etched concrete – before being directed to the galleries in the industrial 1950s building. Stairs and lifts in the new building are wrapped first in concrete then in copper-coloured fins. These are held in place by contrasting stainless steel carriers, the diagonal forms reminiscent of those problematic gasholders. The gasometer itself has now been decommissioned.