Hoskins’ remodelling of Aberdeen Art Gallery offers a visual feast, improving the displays, views of the city and the building’s contribution to the streetscape 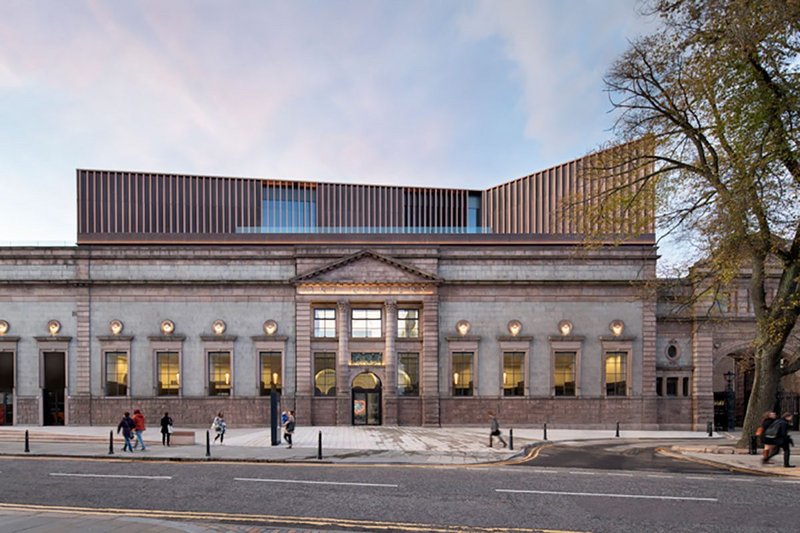 Granite. There’s no avoiding it – attempts to discuss Aberdeen or its buildings without reference to the hard grey stone and its use in the city are seemingly hopeless; the uniformity, the blankness, the austerity of detail enlivened by sparkle... the clichés that begin any article on the city seem to be inevitable regardless of subject. Dodging mention of it becomes most futile of all in relation to Aberdeen Art Gallery, which was originally financed and supplied by granite magnate Alexander MacDonald and designed by that master of the material, Alexander Marshall Mackenzie. The gallery exterior of 1885 revels in the imperviousness of the material, its clarity and most of all its flatness. But much less remarked upon in the physical make up of this city are the copper roofs on many of its larger buildings. For all its proximity to the highlands, Aberdeen has fewer hills than the other east coast cities of Edinburgh and Dundee – with so few elevated public views the ‘copperness’ of rooftop civic Aberdeen tends to go unnoticed. But with Hoskins Architects’ recent redevelopment of the gallery, this may start to change.

Built directly on top of the gallery’s granite wall head, the new roof top extension is the most visible part of an extensive programme of repair and reorganisation to the Category A listed building. A combination of naturally oxidising copper scallops, jointed by glittering red-orange stainless steel strips, forms a sheer wall to the rooftop boundary with Robert Gordon’s College to the east before darting in and out along the principal Schoolhill elevation to the south. It continues to the west where it genuflects away from the (copper) dome on the ­Remembrance Hall, also part of the Art Gallery complex. The extension has an austere allure – while the vogueish fluting of the surface is shared with some other arts buildings of the last few decades, its effect on the street is very satisfying. And the darting plan always reverts to the corner points of the original building – to underline rather than contradict the composition of what is other­wise an accumulation of buildings – while taking its place among the copper domes and spires of its neighbours. Most window and ventilation apertures are set back so as not to interrupt the rhythm of vertical strips. As oblique views along Schoolhill are both the most important and most commonly experienced, the depth of relief in the surface of the extension complements the granite facade below; not so much so as to detract, but equally not too flat. Its appearance against the northern sky, certainly with the low sun at this time of year, brings its own delight, complementing the flecks of mica in the ashlar walls.

Apart from the new extension, the gallery exterior has barely been touched, such is the tendency to cleanliness and the durability of the masonry. By contrast, the architect has reconfigured the interior plan in sometimes subtle, sometimes radical fashion. Welcome as the understated glamour of the new addition is, it is in the organisational configuration of the gallery that the architect has really done Aberdonians a service.

Reflecting the priorities of the original benefactors of the gallery when it was established in 1873, the collection of the Aberdeen Art Gallery has focussed predominantly on work by living artists over the course of nearly a century and a half, the building has a fascinatingly eclectic but nevertheless internationally significant collection of work. Despite this, growing up on nearby Deeside in the 1980s I can only recall with clarity the collection of Joseph Farquharson paintings from that same rural hinterland; soft focus sheep in the snow – frozen mutton. Visits to the gallery were marked by an underwhelming experience of the building and a wholly inaccurate impression that the collection was modest – its range and depth were never fully apparent. Hoskins’ refurbishment has performed a significant corrective. I wonder how many others will have the same ­experience.

The impact of the reorganisation is clear the moment you enter the building: the formerly unprepossessing reception and its thoroughly unpromising café have been cleared away to form a simple and legible entrance area; light, cleanly detailed and appropriately scaled to the function of a gallery in this compact city, and with clear connections to the interior. Passing through newly exposed columns into the enclosed sculpture court, the first consequences of the rooftop extension are immediately apparent – an abundance of natural light and an enjoyable dialogue between the granite and plaster neo-classicism and the simple glass balustraded hoop where the new gallery starts on the second floor. The relative drama of the aperture above you might overwhelm the modestly scaled space were it not for the simplicity of the geometry and the extended visual field through to adjacent galleries. The building opens up laterally in this space, making the additional volume above feel airy. There is also much visual enjoyment to be had from the polychromatic columns to the peristyle – a witty 1:1 sample pack from the original granite supplier patron of the gallery.

Circulation, both new and reinstated, to the original Marshall Mackenzie plan is immediately comprehensible from the sculpture court. Here the axis of the original plan has been developed to create connections between the original building and two subsequent extensions to the west – the Remembrance Hall and Cowdray Hall – as well as with the new rooftop gallery. These connections are all framed by a dark grey timber portal – a unifying motif that is replicated across the gallery, old parts and new. The most notable deployment of the grey timber portal is the large new stairway cleaved through the plan at the back of the sculpture court, visible from the main entrance and reinforcing the sense of openness and legibility. To the west of the sculpture court the Remembrance Hall has also been brought into the functional organisation of the building and another glazed hoop provides efficient connection at the upper level. Although the spaces range over period and typology, the enjoyable jolts of difference in the building relate to space and light, not style or material.

The gallery spaces themselves are appropriately restrained throughout. While the current exhibition design is often distracting (some rooms would benefit from much less ‘interpretation’) in terms of the architecture they are well configured for the display of art, especially paintings – the consequence of a productive discussion between architect and client. Interestingly, the client team was composed of the gallery’s own curatorial staff rather than external project or facilities management personnel. The architect says this led to an ‘absolutely joyous’ process and it would appear to show: this is now a building that does justice to the outstanding quality of the collection it contains.

Up on the roof, the extension provides a standalone gallery for temporary shows as well as a generous exhibition space wrapped around the void to the sculpture court below. The darting plan creates external pockets between the envelope of the new addition and the roofline of the original building – one looking down the length of Belmont Street and the other providing a valuable terrace adjacent to the dome of Remembrance Hall. These external spaces combined with controlled views from the temporary exhibition space generously expand the enjoyment of the building and provide new perspectives on the city – helping to reveal its copper pinnacles, cupolas and domes.