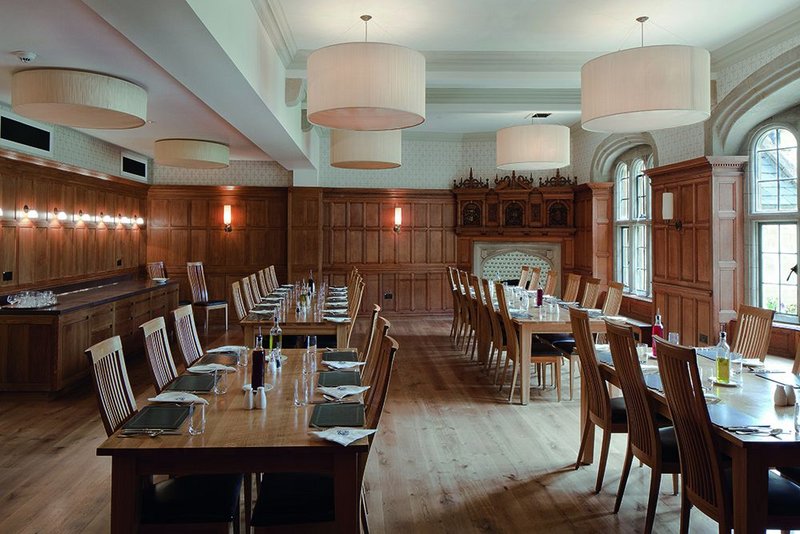 Stealing a slice of the courtyard extension has expanded the Shackleton Room enough to seat all the fellows. The beam (left) shows the line of the old wall. Credit: Andy Spain

‘They added the gables in the 19th century,’ says Alan Berman as he leads me rapidly through the front, 16th century quad of Brasenose College. He is operating at speed because he knows that before we can start really looking I have to orientate myself, get my head round the big moves. It sounded like a simple brief: find space for the senior common room of the college staff to dine together; probably somewhere in the spine between Old Quad and New Quad, the Victorian one. But there are lots of different levels – a lower Medieval Kitchen, and the main dining hall at raised ground floor level – and areas of varying historic sensitivity. Then there are circulation hierarchies: catering and kitchen staff cut-throughs, queuing space for students waiting for dinner (or breakfast, or formal hall) and a grander ascension for members of the senior common room. 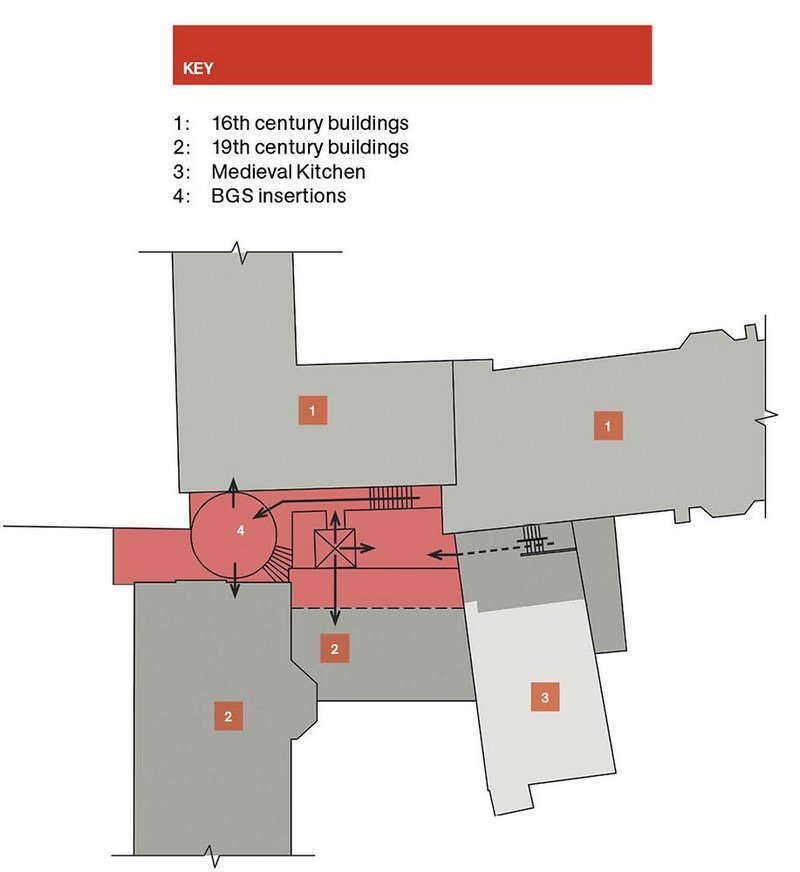 The college had already been cut about and altered. There were the gables and then the Medieval Kitchen, the college’s oldest building which, when Alan Berman first visited, had been lined with stainless steel to deal with the vagaries of life as a servery and had gappy plasterboard alongside the ancient rafters. And the ‘disgusting’ courtyard behind the kitchen was an accumulation of sheds and grease. So in a way it was a typical Oxford College project, all about making a tight site, with historic buildings that have evolved over the years, work a little harder in everyday use. 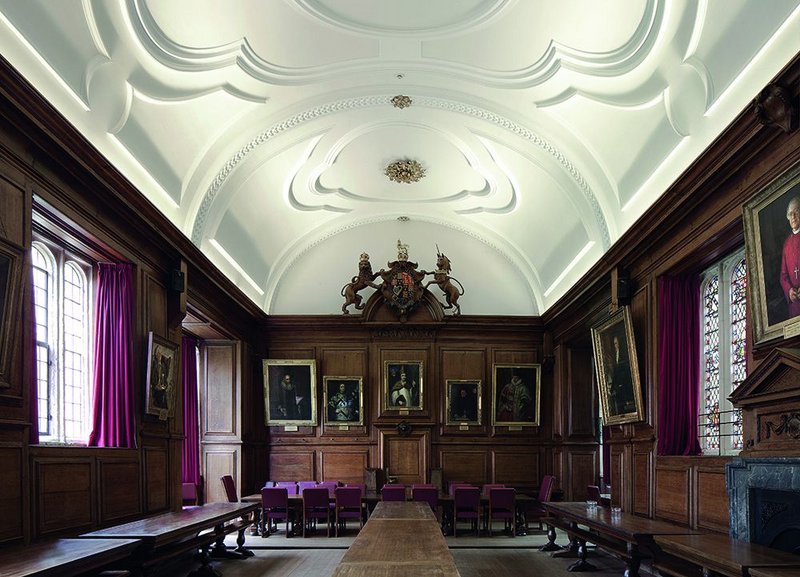 Since leaving London 24 years ago Berman has spent much time building relationships with Oxford University and its colleges. It took his practice Berman Guedes Stretton seven years to get the first college work but since then a steady stream of projects has come his way as word was passed from bursar to bursar. Berman Guedes Stretton has now worked for a total of 14 colleges and has six college projects on the go at the moment, including an £18m set of five buildings for Pembroke College. 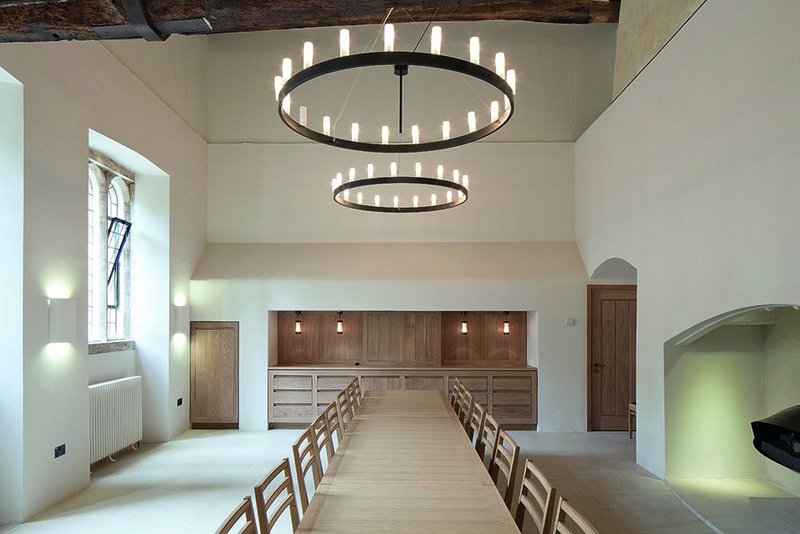 The Medieval Kitchen, beautiful oak furniture and lights with a nod to history, draw out the best qualities of the lofty space. Credit: Andy Spain

‘It was a typical Oxford College project, all about making a tight site, with historic buildings that have evolved over the years, work a little harder in everyday use’

Brasenose came by way of invited competition; the college president bringing the ambition, the bursar tasked with seeing it through. In fact it was three bursars in all, over just three years, and the college president moved on too. So did the ‘excellent’ project sponsor Professor Guy Houlsby. Like many projects with multiple clients and numerous interested parties, the brief changed through the process. Extra guest rooms were added – oh, and a student bar (the money can’t all go on the senior common room areas). In fact when Phil Parker, the third bursar, arrived just before the scheme started on site, Berman was pleased to see him appoint a project manager to help the college organise the process outside the contract and plan how it might function around the works on site. 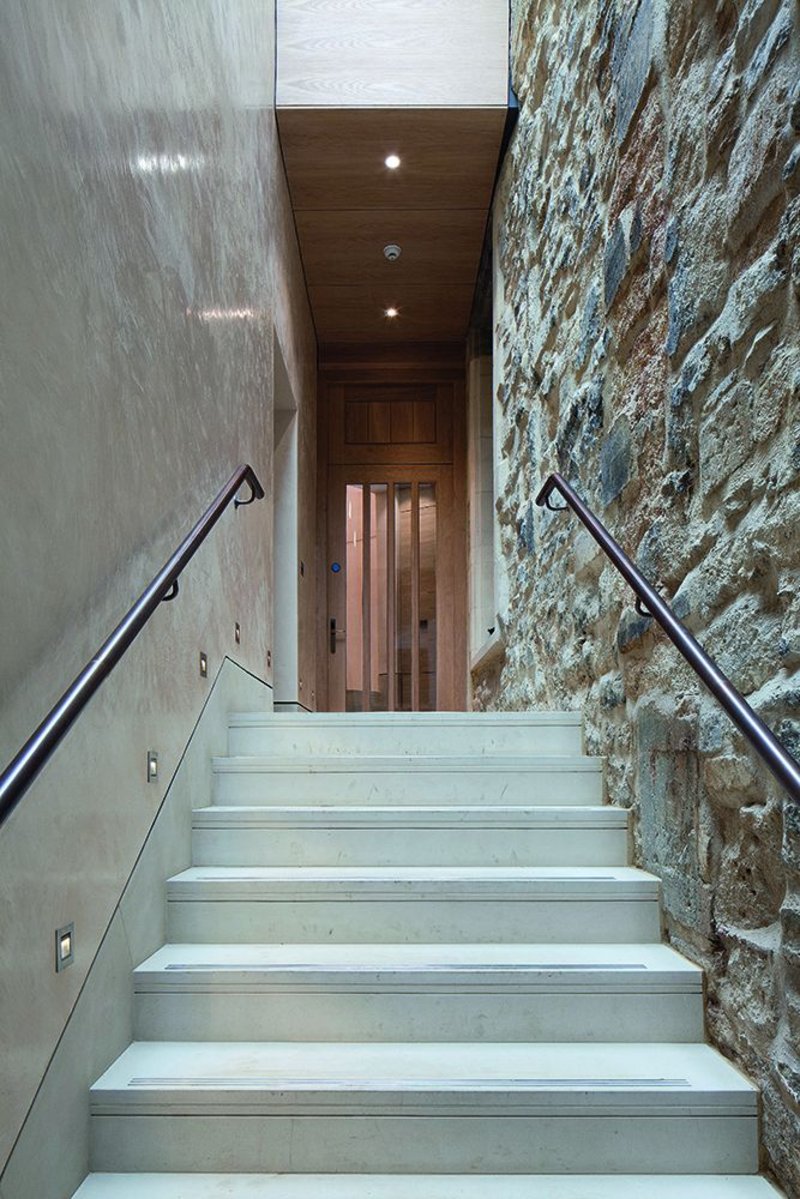 ‘Du Croz describes Berman walking into a design meeting and dismissing it as “all too boring”, drawing a circle on the board and walking out. This became the rotunda’

The central requirement of the design brief was solved using the first floor Shackleton Room in the Victorian building. This had been a simple, rectangular panelled meeting room but was extended to take in a slice of the new building. And bingo: a fellows’ dining room that can seat everyone who matters. But this sounds simpler than it was (of course). The original corner door has been blocked off and the foyer entrance is now through the space that was a pair of old student rooms (toilets are neatly slotted into the other). A large beam was inserted to support the M&E on the roof above. The expanded Shackleton Room has new panelling right around it, with slightly simpler profiles and dentils. Large oak-clad servery counters can be opened for either heated or chilled food, but when closed they have the presence of handsome sideboards – perfect for serious meetings when the whole governing body needs to convene there. With a new pantry (finishing kitchen) and the lift and dumb waiter alongside they elicit glowing praise from buttery staff who serve the food. 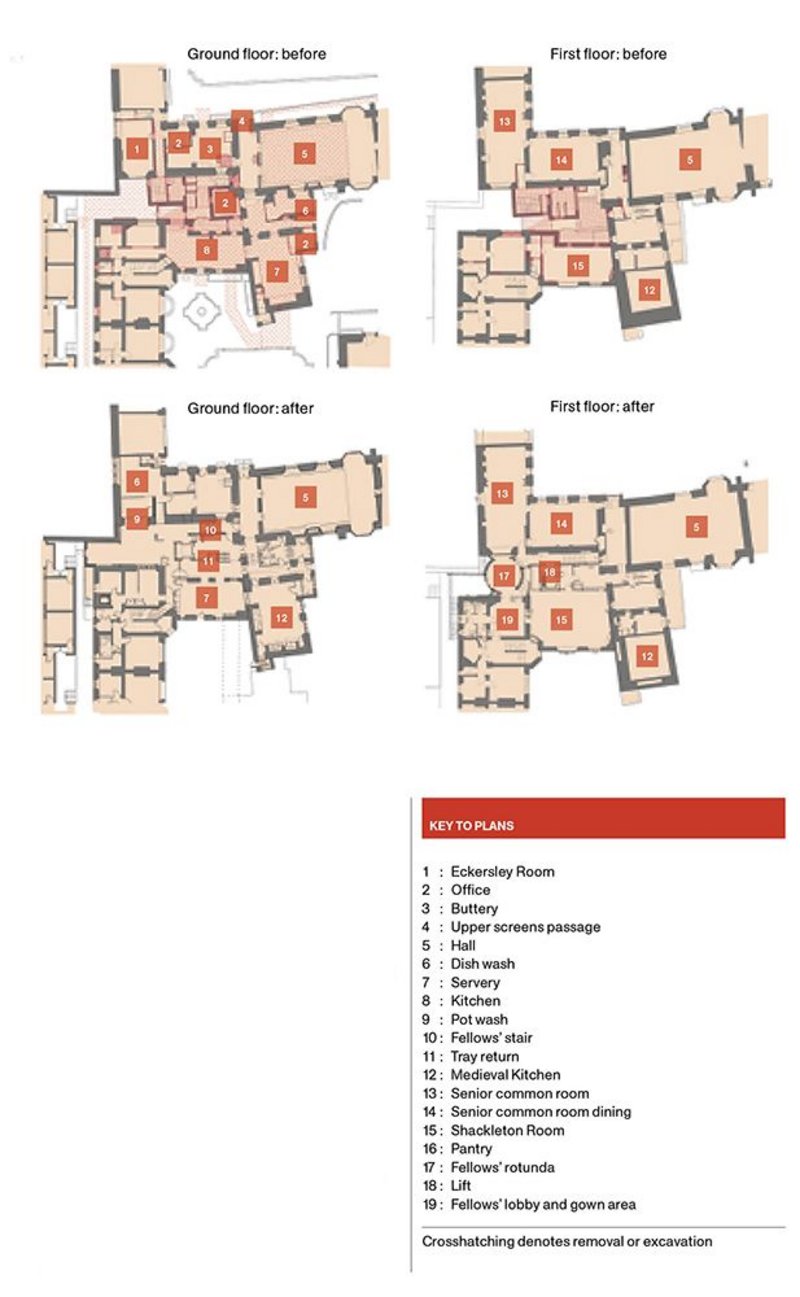 It’s not surprising that a lot of the £5.7m construction costs were sunk into the kitchen and M&E. Bursar Parker talks admiringly of how project architect Jon Du Croz kept all these technical aspects together while designing for how it would ‘feel’ at the end. Du Croz explains how a large part of the project in the early days was reinterrogating the back of house work flows and making the ‘complicated puzzle’ of adjacencies and food deliveries work so the project is threaded with a network of back of house circulation as well the pipe work and services for it to run efficiently.

A 19th century coal cellar under the Victorian quad was used to house the boiler – vented through the neighbouring chimneys which had to be unblocked for the purpose. ‘We were desperate for space,’ says Berman. The first designs submitted for planning had included excavating a basement under the new building – just as Berman Guedes Stretton had done when it designed dining facilities for Queen’s College. But this was ruled out due to complexities and costs (including a mechanical conveyor to get the plates down to be washed which took up much of the space in itself). 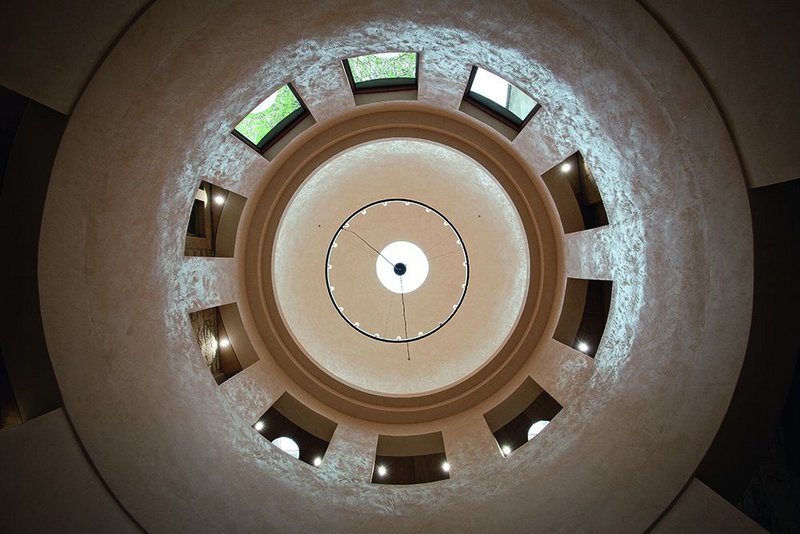 A little order (and some beauty) from the top windows in the rotunda.

The fellows, however, get a new experience when they leave hall and climb up the stairs to their new suite of rooms. Here are handsome oak doors, like the hefty college doors but with glass substituted for planks of timber in long horizontal strips. Once in the fellows’ rooms the door handles are brass. Daylight from the roof lights above highlights the rough 16th century outside wall, now made internal, contrasting with the natural soft warmth of the polished plaster.

Although the new building was essentially a slot insertion carved up to give existing volumes a little more breathing space, Berman reasoned that it should be made into a piece of ‘architecture’. So the first proposal of a flat glazed roof emphasising the new against the old was out. Du Croz describes Berman walking into a design meeting and dismissing it as ‘all too boring’, drawing a circle on the board and walking out. This became the rotunda. And on top a dome – which caused some headscratching when it came down to construction. That was just the start, but planners loved it says Du Croz, and they conditioned the elevation on advice from English Heritage. 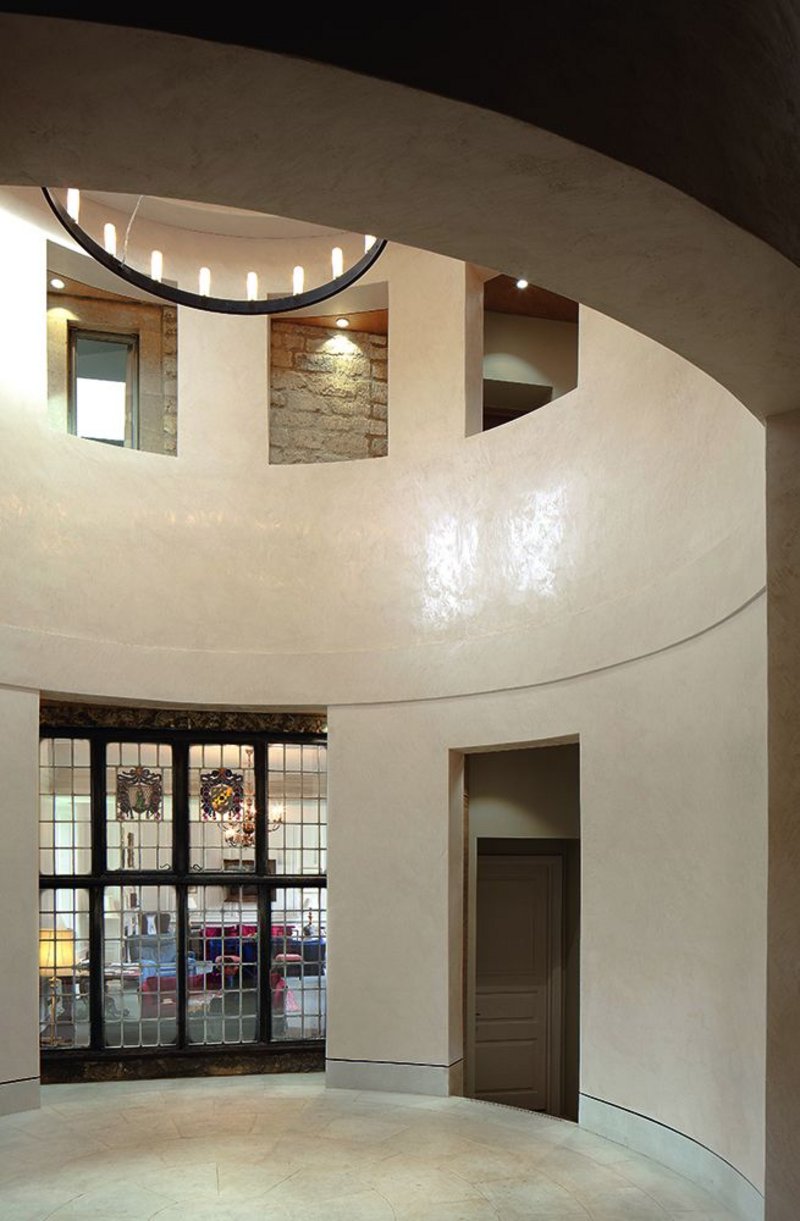 The structure in the lower parts was subservient to the existing openings in the old buildings. Credit: Andy Spain

Students will see relatively little of the work (thus the new student bar, a sort of sop). But their path from hunger to eating in hall is much smoothed with a simple servery and a better plate drop-off that will avoid a clash between those arriving with full plates and those carrying dirty ones. En route they might sneak a look at the Medieval Kitchen – this old servery is now a beautifully restored roof with an elegantly simple room below. For those trying to keep up with wood restoration techniques: to bring out their true colours the rafters were walnut-blasted. But it is no longer a student space except during special dinners. The hall where they eat may look unchanged but should now be warmer and quieter thanks to underfloor heating and acoustic plaster. It all matters! 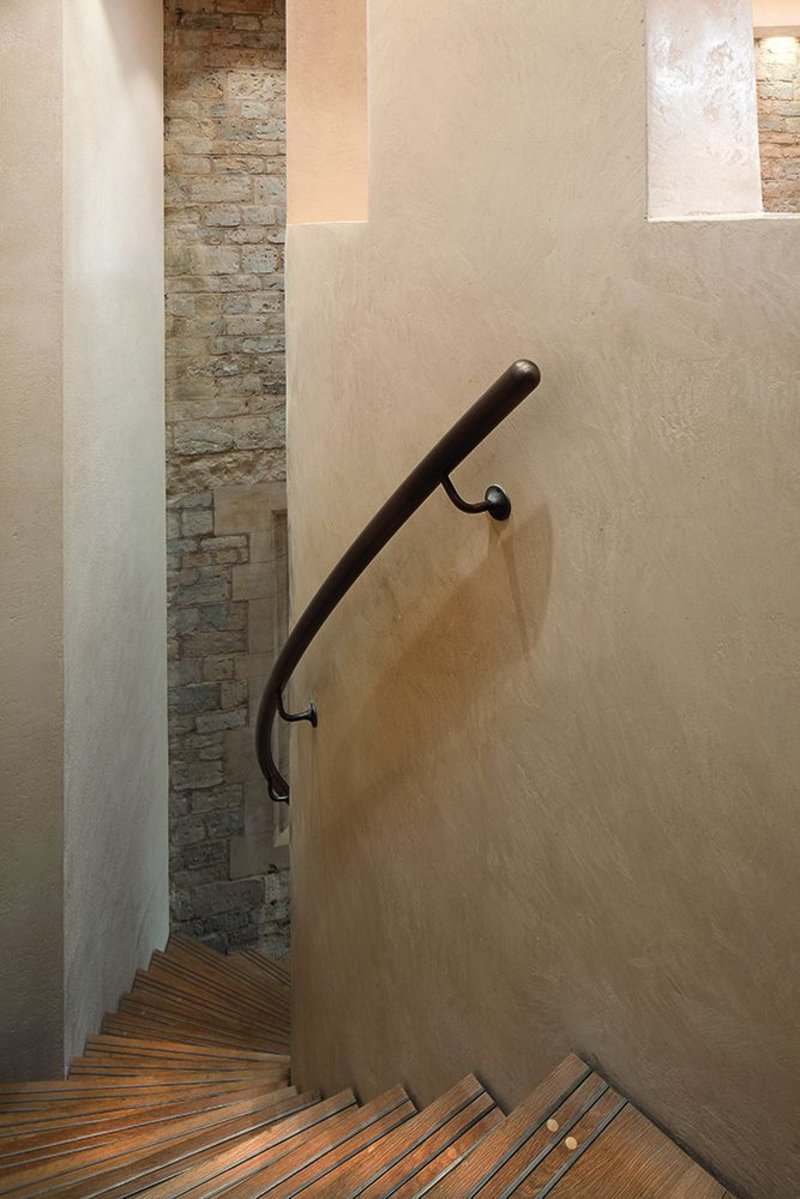 A staircase to guest rooms curves around the rotunda. Credit: Andy Spain

And the rotunda turned out to be more forgiving than a ‘light touch’ glass and steel insertion might have been when it came to taking a load of services down through the space. Berman Guedes Stretton just allowed the new back wall to curve a little to accommodate them. There is no hint of such mundane concerns under the dome. The polished plaster of the internal rotunda works surprisingly well as a beautiful space at the centre of the fellows’ suite of rooms, including the Shackleton Room, anchoring them and giving a sense of coherence. Set against the existing buildings it gives them a chance to be seen, but in a considered and slightly magical way. Soon this little set of architectural manoeuvres will become part of college history in its own way.

In the round: Dome and rotunda

Tongue shape ply set over a series of ribs was the original plan for the dome. But mock ups in the joinery shop of contractor Kingerlee showed that on a tight dome as at Brasenose ply, even bendy ply, would be unable to take the double curvature. ‘It just split,’ explains Du Croz. Dropping in a pre-formed GRP dome was the ‘reluctant default’ that felt wrong to Du Croz. Instead, thin 50-75mm strips of lathe were used (below) – almost like a wicker basket held together by screws and glue. The glue was subject of some discussion after one academic with specialist knowledge in this area highlighted that its molecular structure might not be up to the job. Du Croz was sent off to look for an alternative with a different chemical compound.

Of course, a rotunda costs more to construct than a building of right angles. But construction was kept simple with a ring beam and timber stud below finished in lime render which gives the sense of natural solidity without the cost of stone (and it had to be lightweight as the kitchen below was being kept as open plan as possible). Working backwards from the layout of the kitchen and the facades of existing buildings, each with their own doors and windows, the columns were placed, irregularly, where they would fit. Ten windows were spaced regularly around the top level – ‘to introduce a little order and discipline’, in Du Croz’s words.