Building in picturesque Danish landscapes is not free play. In this small, highly-populated country comprehensive regulations are used to preserve what is left of its open space. The Author’s House is a new home for a writer near Aarhus on the east coast of the Jutland peninsula, designed by Danish practice SLETH. Its planning listing allowed only a reiteration of what was already there – a former summer house whose geometry defined the footprint and volume. These limiting factors guided the way for a relatively quiet house with high-pitched gabled roof, situated like so many houses in Denmark on the edge of the forest.

But this is no ordinary home. From the dead-end gravel road that skirts the property’s boundary, it appears as a contemporary interpretation of a classical house. It is geometrically distinct – sharp-edged, with large, deep, figurative openings and a long ridge turret. Elegantly composed of three skylights and a chimney, it is entirely clad in standing seam copper panels.

Spatially, the building explains itself in a few, simple facts. The author had bought the house in a scenic location to function as her everyday office getaway. She comes here every day to work: to get inspired, to think, read and write. It is her workspace, a comforting writing sanctuary suitable for sporadic sleepovers; not her holiday home. Materially, it is a concrete plinth on the forest floor with a rigid steel frame on top, the copper exterior holding large glass panels contained by wooden frames. Inside, wooden walls and ceilings and long, grey curtains are offset with a few, key, smooth Yves Klein blue surfaces. Each of these elements holds a refinement that justifies a detailed review.

Cladding the building in copper not only gives it a certain significance but also bestows a long, distinguished weathering process. When the cladding was installed, the shiny surface of the bumpy, thin metal glittered in the sun. By the time the photographer came, it had become matt and darker stains had emerged. When I visited a year later, it had become much darker still, with an underlying deep red colour. According to hearsay, copper workers used to collect their urine and pour it over the roofs to accelerate the weathering process. At the Author’s House, this anecdote is made real as animals pee on the corners, creating verdigris stains that point to the future where the entire shell will eventually have turned green. These are processes of weathering that will continue over decades and provide excitement each time the house is experienced anew.

Traditionally, large copper surfaces have predominantly been reserved for church spires and castles, with everyday buildings seeing it used only for small coverings of exposed details. It has also been a ceremonial material, and was beloved by the Danish modernist movement. Arne Jacobsen’s Town Hall in nearby Aarhus with its slender verdigris roofs is a prominent example. So applying it to a small retreat like The Author’s House gives it a certain confident nobility. And the scheme certainly deserves such attention, in the detail too. No gutter disturbs the meeting between roof and wall, but a small copper lug controls dripping rain. In the gables, the standing seams of the copper continue directly towards the sky. Superbly executed, these small details underline both the overall presence of the house and the refinement apparent throughout.

The concrete plinth is planed down to reveal an aggregate of sea stones creating a pretty, smooth and soft surface that extends outside. It is sleek but not slippery, even on a wet terrace. Internal heat is provided by a geothermal system under the south-facing garden. In the airy, overhead-lit interior, one is met by the pleasing scent of the Dinesen Douglas fir that lines every surface. Thick planks of it appear as shelves along the walls and as boards lying and standing in a steady rhythm along the ceiling. They form the front end of the building and the table in the small kitchen, the stairs and the floor of the loft’s sleeping spaces. Treated with a slightly white-pigmented oil it feels light and accommodating.

The delicacy of approach is extensive but not overdone. Most of the surfaces are relatively robust, and that is good because this is not the kind of house one is supposed to directly engage with. Consequently, the detailing prioritises clean aesthetics over accessibility for additions, alterations and even maintenance. If something needs to be done, the architect is consulted and a professional craftsperson is engaged. No need for a workshop shed here.

Its name, the Author’s House, might make one think of mythic places like Le Corbusier’s Cabanon on the Mediterranean coast, Heidegger’s hut in the Black Forest or even Thoreau’s hut by Walden Pond. Simple structures that offer a gem. Away not only from other people, but also from the cultural amenities that alienate human existence from nature, they offer other ways of being that generate creative thinking and support original production, regardless of format. But if you’re thinking that, think again.

In the Author’s House, you can open the doors to the forest when the birds sing and the light filters through the tree crowns. You can sit on the west-facing terrace when it is heated by the afternoon sun and enjoy the view of the nearby lake. Or you can appreciate the cornflowers in the earth above the water tubes in the neatly curated, seeded garden. But when autumn comes with cold winds and heavy rain showers, you can slide the glazed doors with the touch of a finger and draw back behind the thermal windows to enjoy the heat from the smooth concrete floor. You can even entirely close the soft heavy curtains and focus on the pleasurable surfaces and smells of the Douglas fir inside.

SLETH, the office behind the project, has helped move Danish architecture beyond a burdensome self-satisfaction through several of its projects that few local architects would dare. With a bold, playful curve, it won the competition for an extension of a canonical modernist town hall in the southern Jutland town Tønder. When building the studio’s own office in Aarhus, it put forward a somewhat alluring cracked concrete monstrosity called Sonnesgade 11 immediately beloved by architects.

As a contribution to the architectural discipline there are critical questions to ask. If a closeness to the forest was somehow apparent in the assignment, doesn’t the large concrete platform then establish a counterproductive distance? Does the floor surface that continues from the terrace into the interior draw the surroundings in or does it rather domesticate them? Is the elegant minimalism an antithesis to a life in the countryside which architecture ought to somehow deconstruct? These are ambiguous questions that endure after a visit. As for the nature relationship that is somewhat inevitable in contemporary architecture, the Author’s House is not a particularly progressive statement. Neither does it continue the radical boldness of the practice’s earlier projects.

But it does something else. Touring the Danish countryside can leave one doubtful of the value of the architectural profession. Most standard houses appear as peculiar re-enactments of random historical typologies. Architecture’s quality criteria in all its diversity is seemingly light years away from any interaction with most rural building and houses. In this context, The Author’s House holds the potential for an alternative – not in the most exclusive details, but in its general approach. It starts in a well-known typology but expresses itself as thoroughly contemporary. It resists too much architectural navel-gazing but offers an idea of luxury that the general public can embrace – possibly one that in a modified edition could become a standard for a new vernacular. As specific as the Author’s House is for its writing client, it is also to a large extent an example to replicate. At least it makes this critic dream of a future with increased respect for the architectural craft.

And I cannot help thinking about what book the Author’s House would have been, had it been a piece of literature itself. It probably would not be standing in the shelves of original philosophy or great poetry. It might rather be a crime novel; one that does not put too much effort into changing a fairly classical plot. Instead, it leaves the pages for a refined description of its few main characters. Every single one of these, however, is so precise that they will stay with the reader long after the book is finished. And isn’t that what makes good literature anyway? 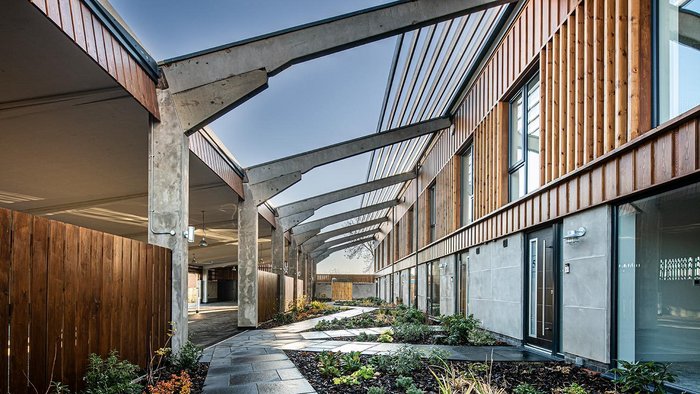 Less description and more atmosphere builds the places in your mind