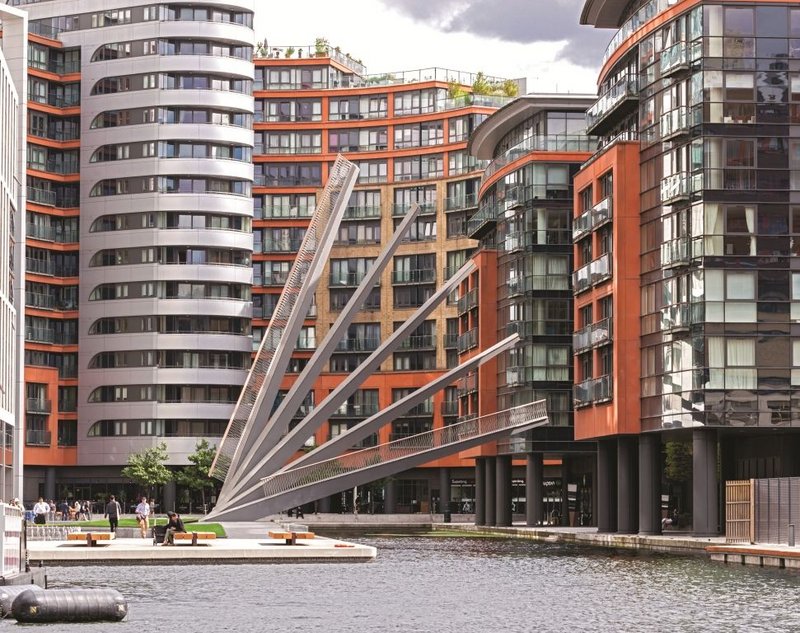 The new Merchant Square bridge forms a fan with a flourish when raised.

Bridge-spotters now have another reason to go to Paddington Basin in west London. For 10 years, Thomas Heatherwick’s unfurling Rolling Bridge has been demonstrated every Friday at midday. Now it has been joined by an even more spectacular new footbridge nearby, which creates a distinctive fan shape in its open position by splitting the fabricated steel deck into five ‘fingers’ raised in an action similar to that of a Japanese hand fan.

The footbridge, over the Grand Union Canal, is designed by bridge specialist Knight Architects with engineer AKT II for client European Land as part of the Merchant Square development.

Martin Knight says it was important that the new bridge, positioned a short distance from the end of the basin, should have a touch of visual theatre in its opening mode.
‘We wanted it to be a spectacle because it is ultimately a folly. But even though it’s a folly it still had to be robust and reliable and meet a challenging budget,’ he says.
The first key decision was finalising the location. Knight challenged the direct crossing position given in the brief, which would have produced a span of 15m. Instead, he proposed a skewed alignment offset by 3m in response to the contours of a footpath and building on the north quay.

Like the Rolling Bridge, Knight’s 17.1m long crossing needed to fulfill the British Waterways requirement for all its waterways to be navigable. This left the designer with three main choices: a fixed elevated bridge, a horizontally opening swing bridge, or a vertically opening bridge.

The elevated option had the disadvantage of taking people away from the quayside and would lead to land ownership issues on the south quay. A swing bridge would also take out use of some of the quayside, and would crucially lack drama. In particular, Knight thought the side-opening mechanism would be too resonant of the 20m long narrow boats that manouvered at the end of the basin.

The chosen option is a far more exciting vertical-opening design achieved by a hydraulically operated hinged bascule mechanism, supported primarily from the north quay. To develop the design, the engineer and architect used Rhino with a Grasshopper modelling plug-in.

‘Through these an extremely lightweight and economic structure was achieved, based on an outer plate thickness of 10mm and an internal ribbing of 10mm plates,’ says AKT II director Daniel Bosia.

For the vast majority of the time, the bridge is closed, clearing the high tide by just 100mm to give a sense of walking on water. In this position, the bridge is sober in appearance, each deck beam slotting down onto a conical-tipped steel bar on a shelf on the southern quay. The most visible element is not the bridge deck itself but the integral five steel counterweights on the northern quay which balance the cantilevers. These counterweights, says Knight, are conceived as sculptural objects in the landscape that give a clue to the raised form of the bridge. A great deal of deliberation went into their scale – they needed to be visible but don’t compete in any way with the main event.

‘There’s something nice about the understated quality of the bridge compared to the drama of when it’s open... We didn’t want a peacock there all the time,’ says Knight.
The fabricated, 600mm wide trapezoid box girders are tapered from 900mm deep at the pivot point on the north of the quay to 300mm at the tip on the other side. These lock together laterally to form a rigid, single deck. One of the challenges was achieving only the narrowest of gaps – the client was adamant that there would be no danger of anyone catching a heel in the gap or of a glimpse of the water beneath. Each has a stainless steel edge strip which contains anti-skid surfacing. 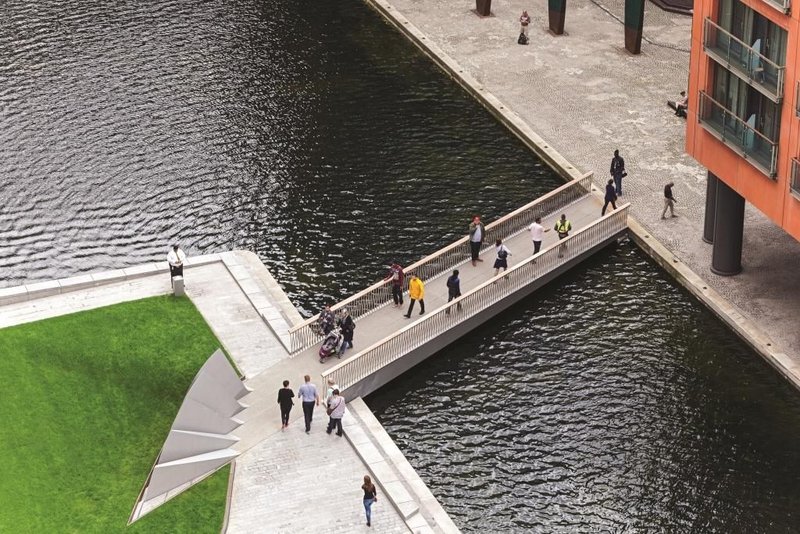 The bridge when lowered with the counterweights (to the left) forming part of the landscape.

As the bridge deck is raised by the hydraulic mechanism, the counterweights rotate down flush into the ground. Added spectacle is created by splitting the 3m wide deck into five parallel, equal beams that rise intentionally slowly in a graduated, sequenced flourish from 67° to 16°. This lowest beam achieves the required clearance at mid channel. The design allows each beam to move in windy conditions and to avoid any contact by offsetting the axis of rotation by 784mm between each finger. Each beam moves faster than the next to co-ordinate the fanning effect during the opening sequence, with manual override possible if necessary.

We wanted it to look as simple and minimal as possible, but to make something that minimal is much harder,’ says AKT II director Daniel Bosia.

The bridge has epoxy resin decking in charcoal grey to match the quayside paving, with tubular stainless steel balustrades and a timber handrail. The balustrades, says Knight, gives a comforting sense of enclosure when looking along the bridge but still allow a degree of transparency when the bridge is viewed side on from the ends of the dock.

At night, the bridge is lit by LEDs beneath the handrail and strip lights between each counterweight to wash light up onto the sculptural forms.

One of the biggest challenges was installation. Because of limited vehicular access to the basin, the steelwork was prefitted in the fabrication shop with its pivots, pistons and bearing plates to ensure a very tight tolerance. It was then disassembled and brought to site by barge, arranged on the vessel with the highest point in the middle to ensure that it would clear the vaulted bridges en route.

A separate project by Townshend Landscape Architects integrates the counterweights into the landscape design for a quayside terrace.

‘One of the real challenges, and the beauty of the project, is that everything is bespoke,’ says Knight. ‘The idea is unique and the solution is unique, with everything thought through from first principles. It’s very rewarding.’

Soon more buildings will be constructed at Merchant Square, including a high-rise designed by Robin Partington & Partners – adding to the collection of offices by Richard Rogers Partnership, Terry Farrell & Partners and Mossessian & Partners. These new buildings will bring increased footfall across the new bridge and an even greater potential audience for the regular Friday lifting of both of Paddington Basin’s kinetic bridges. 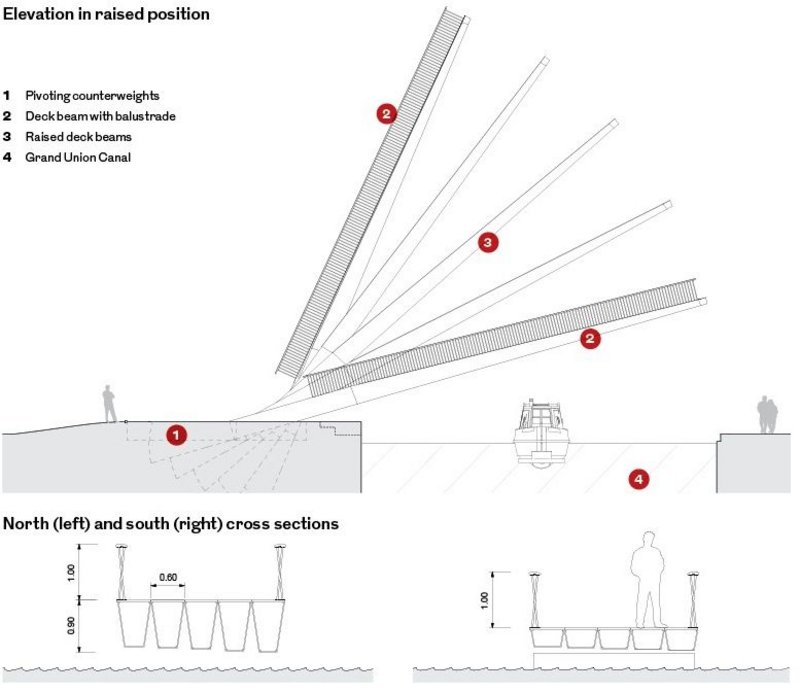 Five shaped counterweights are set behind the bridge’s hinge points to assist the hydraulic mechanism by reducing the energy required to raise the deck structure. These sculptural forms stand 3m high on the north quay and form the main visual interest to the bridge in its down mode.

‘It looks like a piece of art on the bank,’ says Mark Randerson, operations director of S H Structures, who fabricated the steelwork for the bridge.

The counterweights are continuous with the cantilever steelwork, having been fabricated as hollow boxes and welded to the beams at the workshop (below). They were fabricated from flat steel plates in sculptural conical form with one side flat and the other shaped to resemble, according to Randerson, segments of a flat-bottomed discus. They were welded, ground, sanded, shot-blasted and painted before being barged to the site with the deck. Because of the combined weight, they had to be transported hollow and filled with concrete only once they were installed on the quayside. Close fitting slots around the counterweights are designed to avoid any openings for people or objects to fall into. The concrete fill increased the weight of the counterweights from approximately four to eight tonnes each, with plates added to cover the nozzle holes.
When the cantilevered deck beams are raised, the counterweights pivot down into a 4m deep pit.

‘S H Structures did a very good job with the complexity of the form, and made sure that the design intent could be built,’ says AKT II’s Daniel Bosia. 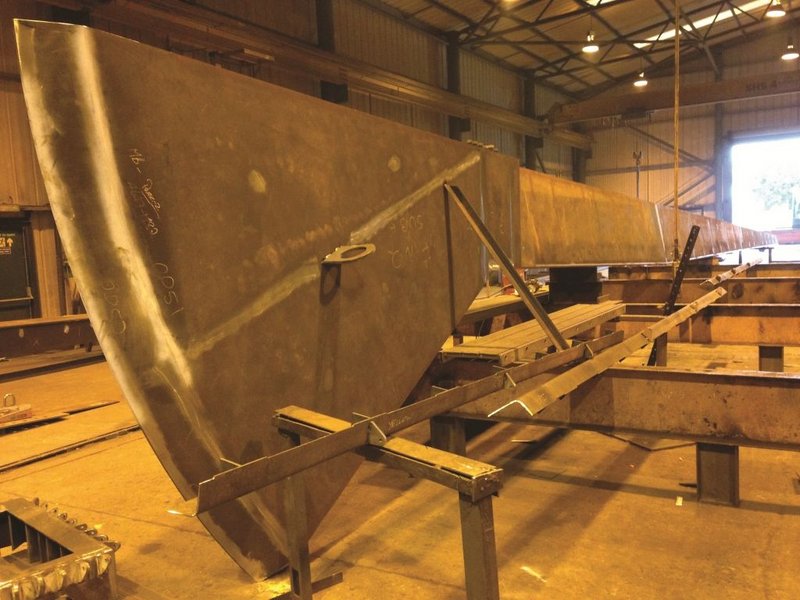