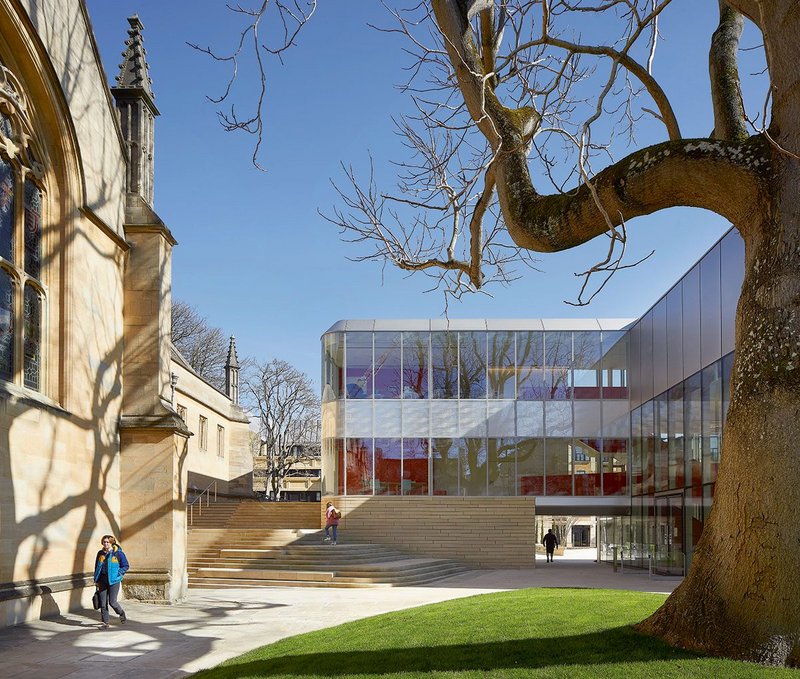 The building brings a sense of openness, through its central knuckle and around the edge where a generous flight of stairs links first-floor terraces to the Back Quad. Credit: Hufton+Crow

Wadham College, Oxford, has a series of quads keeping itself quite apart from the city centre that it sits on the edge of. Just visible from the street are heavily leaved trees, slivers of green and ancient doors set in limestone. Peering through one gate you can just glimpse the glitter of a new building; glass, with a purple, pink or is it green sheen?

Amanda Levete Architects’ outreach centre and junior common room – the Dr Lee Shau Kee Building and the William Doo Undergraduate Centre – lies between quads, on the foundations of the 1950s Goddard Building it replaced. It is a double jointed building of two wings, distinguished as much by its problem solving for this late 20th century college quad as for its new spaces. Inside is a bar, café and social spaces in the undergraduate centre; student bedrooms with some teaching space in the other half.

This hidden project has more significant reasons for study. It is the third of a new generation of Oxford buildings by women-led practices, following in the steps of Zaha Hadid’s Middle East Centre library and archive in stainless steel and the arching glulams of Alison Brooks’ Cohen Quad, for Exeter College. All three have an unexpected materiality for their context. And AL_A’s project makes some big, surprisingly untrumpeted, moves to reduce embodied carbon – showing a direction of travel that we must hope ­Oxford University’s many other developments will follow.

Across the quad from AL_A’s project are student residences designed by MacCormac Jamieson Prichard with all the expressive light and shadow they could throw at it. AL_A director Ho-Yin Ng studied it in his first year at architecture school. Its first-floor circulation links to a frowning 70s library (courtesy of Gillespie, Kidd & Coia) and its external terrace, also on the first floor. This was always a forgotten level, accessed by narrow stairs. The new building should turn it into a busy thoroughfare, linking it to the rest of the college with wide and sociable flight of steps, and AL_A has also positioned a café to spill on to the terrace. A double-height lobby links the outreach building to the undergraduate centre. Credit: Hufton+Crow

The other big, almost urban, move is to open the knuckle between the buildings, providing views between the more traditional Back Quad and the complex landscaping of the Webb Quad, this resonates with other views through staircase corners in the college. The new building encloses the Webb Quad with a finely judged sense of scale that allows the curving back of the Holywell ­Music Room to take centre stage.

The York stone stairs and plinth are the only concessions to the college’s existing masonry materiality. Ng explains the detail of the facade: its glass is frit-etched with a much-mocked-up pattern; this is then laid over colour interlayers and, with its reflective aluminium backing, creates unexpected chromatic shifts as the light changes. Along the roof edge, the aluminium panels angle back, appearing chamfered and satisfyingly suggesting depth of facade, yet somehow ­diminishing the building mass.

The outreach building, facing east-west with student rooms on the first floor, has narrow vertical bands, each joint aluminium-capped with assurance. The glass of the undergraduate centre is split horizontally, giving a greater sense of openness for the social spaces, as is the knuckle, with much of the glazing – without aluminium panels – allowing more views through. AL_A wanted to avoid the mismatch in scale from small domestic size windows to student bedrooms; instead full-height panes can slide open. Inside, the detail is made the most of with window benches built-in against a glass balustrade. 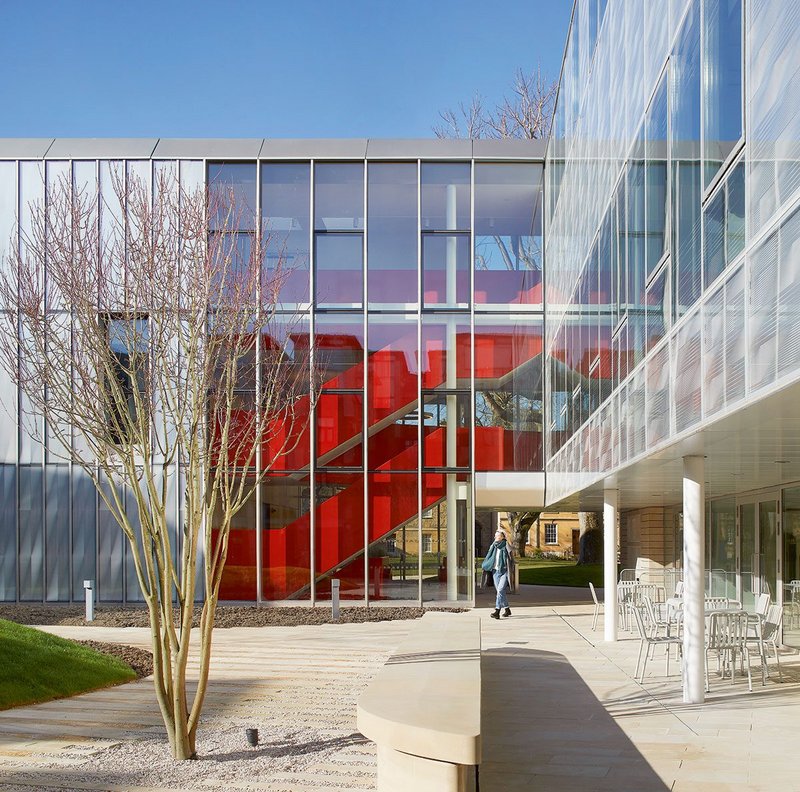 The sunniness of the Webb Quad is captured in the south-facing colonnade to the undergraduate centre. Credit: Hufton+Crow

The colours behind the glass, particularly the champagne-tinged aluminium, may make reference to the limestone around it and to the stained glass of the early 17th century college chapel. And the fritting and layering may be a way of establishing texture like the rubble stone of some of the neighbouring cottages it butts up against and the curved back to the Holywell Music Room – though these are not the references that most people would jump to. But like Hadid’s stainless steel and Brooks’ glulam, the materiality is unexpected and is carried off with aplomb on an Oxford budget (undisclosed but clearly generous). There are also parallels with other AL_A work – most notably the central staircase which uses the same details as the one at the V&A extension, also in lacquered timber.

The work of rethinking embodied carbon begins here, though the starting point of demolishing the Goddard Building on the site didn’t bode well, no matter how dark and dingy it was. But at least the foundations were reused for half the new building, the lower ground floor also housing a bike store and laundry room (incongruously vented into the reinvented Webb Quad). This took a lot of piecing together and coordination of where exactly the structure would hit foundation. ‘It seemed a cool idea at competition stage,’ says Ng, remembering the work of piecing together geometries.

Inside, the structure is steel spanned by CLT floor slabs which in many areas are left exposed, both the steel and CLT washed in white. This doesn’t quite fit with the idea of a hugely polished facade, but nor does it quite give it character – though no doubt occupation as Covid restrictions lift will make the most difference to this. 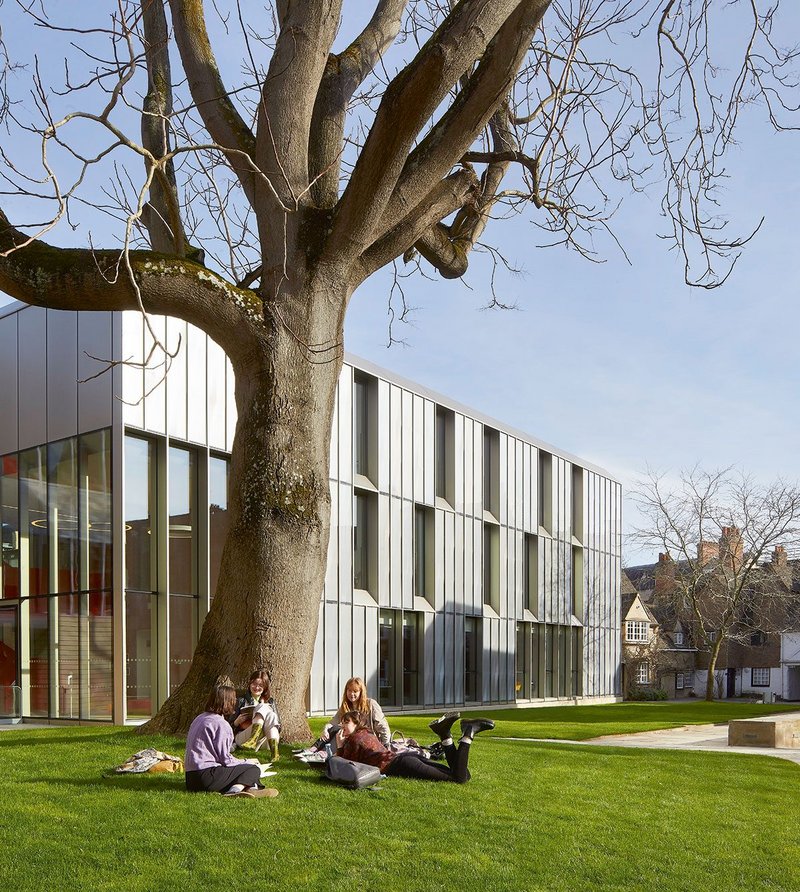 The facade of the outreach centre – seen here with tree of heaven in the foreground – is all about reaching up. Credit: Hufton + Crow

Wadham, like other Oxford colleges, now has to monitor its student intake. This year 70 per cent of its UK offers were to students from state schools, and the outreach centre works to improve the diversity of its intake. To encourage this, the college runs summer schools each year and works closely with schools in many deprived north-east London boroughs, with visits from two or three schools a week in normal times. The new block will allow it to do this neatly in one building with teaching rooms and gathering spaces as well a summer-school rooms. It is already working hard for the college, with students in the rooms even before the college officially opened following the latest lockdown. Does it just make a neat solution to the conference market? Not according to Ng, who says Oxford City Council policies demand academic use of the building.

Traditionally, Oxford and Cambridge universities have shown the best of successive generation’s designs by investing in architecture, with the freedom to design in already beautiful surroundings, without the constraints around cars and street presence. This twin-set of a building has all these advantages, a mature tree of heaven to look over and quads on either side to set it off, the historic one laid to lawn and the modern one with stripes of planting and a mound. Yes, it borrows the technology of office facades, but it seems to be able to remove itself from too direct an association. Whether or not it is seen as an interloper or a treasured friend depends very much on the whims of future generations. But for now it adds a touch of shine to Wadham.