‘Here be dragons,’ Simon Jenkins told me once, long ago, jabbing a finger on a plan. The architecturally-aware journalist and conservation campaigner was at the time on the South Bank Board. It was at the time of the first, late 1980s, Terry Farrell-designed speculative project for the South Bank Centre. Jenkins was showing me the scheme and, naively, I’d inquired about the untouched National Theatre next door. It was emphatically apart, Jenkins informed me. The dragons were then NT director Richard Eyre and – even more fiercely protective of the theatre – its architect, Sir Denys Lasdun. As I was soon to learn when writing about it, Lasdun would leap to the phone to defend his masterpiece, breathing fire at the slightest provocation. He was magnificently engaged.

Since then, the theatre has had two large-scale rejigs. The first was by Stanton Williams in the late Eyre era, completed in 1998 when the theatre was already grade II* listed. Lasdun, who died in 2001, went on record as hating it, resenting being (as he saw it) excluded from the process, though he had successfully campaigned against a proposal to remove an external terrace at the front, a key part of his original composition.  Actually the Stanton Williams scheme did much to make the theatre fit for changing times and changing demographics, especially by removing cars from the riverside front of the building, which had become thronged with pedestrians since completion of the riverside walkway.  Among much else the Stanton Williams project saw his open porte cochère car drop-off glazed in to make a larger bookshop, and the creation of a ‘theatre square’ where the cars used to sweep round.

The second, more extensive revamp, just completing now, is an £80m one by Haworth Tompkins under the regime of the National’s artistic director Nicholas Hytner. We should all know by now that practice’s policy of conservationist restraint coupled with judicious additions when it comes to existing buildings – such as the earlier Chichester Festival Theatre by Powell & Moya (RIBAJ, August 2014). Inevitably it has reversed or modified some of Stanton Williams’ work, not least moving the bookshop and reinstating an open view through part of Lasdun’s porte-cochere. In terms of external public spaces, it has amplified what Stanton Williams began, both along the river frontage and up the eastern flank where it has expanded the former Cottesloe Theatre, now the Dorfman.  But the key thing here is that it is the first architect to be able to extend the theatre complex. The new Max Rayne Centre on Upper Ground at the rear of the building – housing backstage workshops and offices – provided the key to unlocking the whole place.

How do you add an extension to a building of this stature?  It required considerable groundwork: the critical act being removal of a ramp down to the underground car park and shifting it to the western flank instead. After this, Haworth Tompkins kept it simple: a steel-framed rectangular box containing a pretty spectacular full-height scenery workshop at its east end which we the public can now look down on from a pedestrian route starting in the Dorfman foyer. The west end is a stack of production offices. Outside, it is expressed in vertical aluminium ribs spaced to harmonise with Lasdun’s glazing elsewhere in the building. Between the ribs are two layers of loosely-fixed stainless steel mesh, which create moiré patterns at certain sun angles. The building has balconies wrapping round its south-west corner, which has great views: opposite, the Coin Street Community Group is developing its land to a Lifschutz Davidson masterplan, with only Allies and Morrison’s Rambert dance HQ and Ben Barfield Marks’ temporary Green Room restaurant (operated by the National) so far to be seen.

The Max Rayne building is OK: a workmanlike, well-proportioned box, nothing more. I miss the sharply-raked metallic hood of Lasdun’s previous paintshop at the rear of the building, a piece of well-executed expediency which has now gone. The relatively lightweight appearance of the Rayne building, though it stands proud as a separate linked form, means that we’ve lost the visual clarity of the fortress-wall appearance of the back of the National. Luckily Lasdun’s rare touch of wit, the ‘arrowslit’ windows to the theatre’s armoury, are still there on the building’s untouched south-western corner.

Designing for permanence brings its problems: the joie-de-vivre of the same architects’ vivid red timber box temporary ‘Shed’ theatre on the opposite, north west corner of the building – absorbing displaced Cottesloe audiences during rebuilding, and now given a further year’s life – visually works better in some ways than the Rayne building because it didn’t have to think too hard.  But of course, given that it obscures a large chunk of Lasdun’s river frontage and is parked on Stanton Williams’ ‘Theatre Square’, it would never be countenanced as a permanent structure.

The best impact of the Haworth Tompkins scheme is in the thorough reorganisation of space that the extra elbow-room of the Rayne building now makes possible. The flexible Dorfman (the only one of the three auditoria it has touched) now has a maximum 450 seats rather than 350, a larger two-level foyer and an education room. For the first time the whole riverside frontage of the theatre is now public foyer and restaurant space, wrapping right round the downstream riverside corner with the lively ‘Understudy’ bar.  This corner, with its audacious raking concrete struts, showing Lasdun at the peak of his powers when it came to formal composition, was originally wasted as the services backside of the building – because the riverside walkway ended here. Indeed the whole building was composed to face across the river and upstream – south and downstream were the Badlands. And yet – Lasdun summoned the ghost of Hawksmoor to make that masterly, dark, corner.

Today, you are as likely to approach the theatre from that direction as any other. Here Haworth Tompkins re-uses originally non-public rooms that once housed such things as kitchens and sprinkler system tanks. Rather than extrude the fine finishes of the foyers into these spaces, it has left them rough, with a below-stairs feel. It’s more the practice’s  kind of aesthetic anyway.

As Tompkins says:  ‘This was an entirely bespoke building, not a machine-age one.’  In the original interiors, it all comes down to a few materials: concrete, brick, dark Wenge wood, stainless steel, purplish carpet. From the exterior, you could almost regard shadow as a material, such was Lasdun’s emphasis on the deep recesses in the stratified layers of the building, his rejection of conventional facadism. The rule Haworth Tompkins set itself was that Lasdun’s original boardmarked concrete was sacrosanct, and should not be replicated. (In fact, Tompkins and project architect Paddy Dillon did show me one small section of unavoidable new concrete, but apparently that replaces what was a later section anyway, so does not count). Overall, the concrete exterior has once again been cleaned and lightly repaired – no rebar rust streaks. Some new downstream foyer space is made by swinging one of Lasdun’s ‘cathedral’ windows outwards, something the wide overhangs of the terraces make possible – as Stanton Williams previously discovered in the upstream foyers.

Inside, there are so many incremental changes it would be hard to list them all here – bars, cafés, bookshop, ticketing, the main theatre restaurant, exhibition space – all rethought, in some cases going back to something nearer Lasdun’s original thinking. Wenge wood is no longer regarded as sustainable, but a near-identical effect is achieved here with staining and polishing other timber. Here’s the result of it all: whereas at ground level all the foyer space was originally to your right as you entered via the porte-cochere, now there is a considerable amount to your left as well, and there is more variety of spaces. And the Dorfman is treated more like a real theatre on the eastern flank, less like the side-entrance afterthought that the original Cottesloe was. Even so, it cannot be connected to the Olivier and Lyttelton theatre foyers internally.

Outside, the upper terraces have been tackled, with a new roof garden. Overall the energy efficiency of the building has been much improved, even with a large new building attached. Certain later additions – such as Stanton Williams’ glass canopies running down the flanks – have quietly vanished. The original NT logo by FHK Henrion is back, and (amazingly, for the first time) the building has its name on it. This is intelligent, painstaking work and it brings the whole theatre complex back into focus.

Were the dragon still here to comment – well, he’d probably still be a bit curmudgeonly. I half expect a phone call from the afterlife. But, Sir Denys, your theatres are still alive, your building has absorbed change remarkably. This is not a museum of theatre architecture. That’s important. 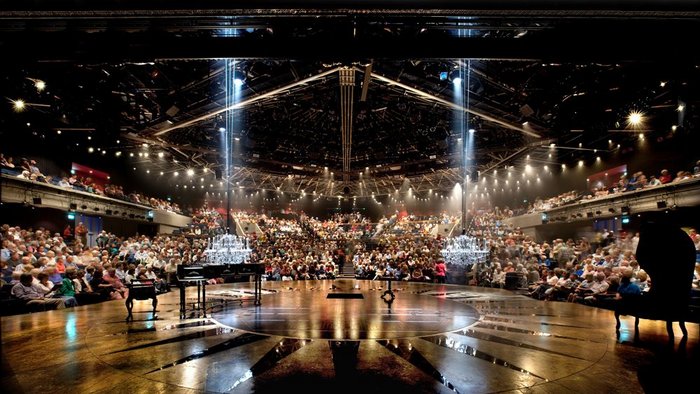 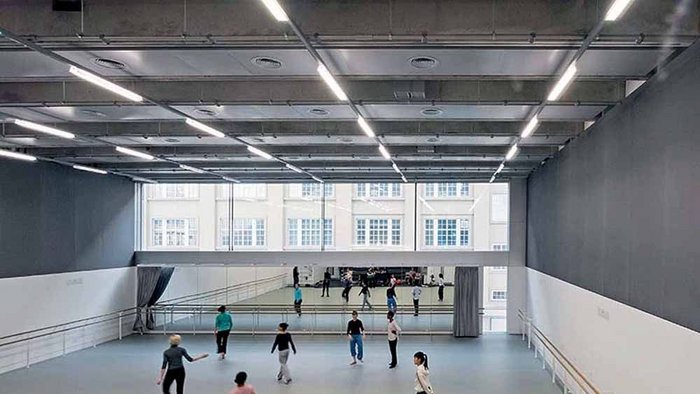 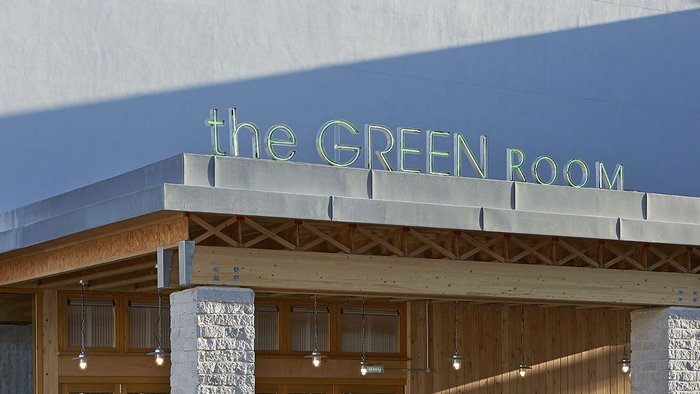