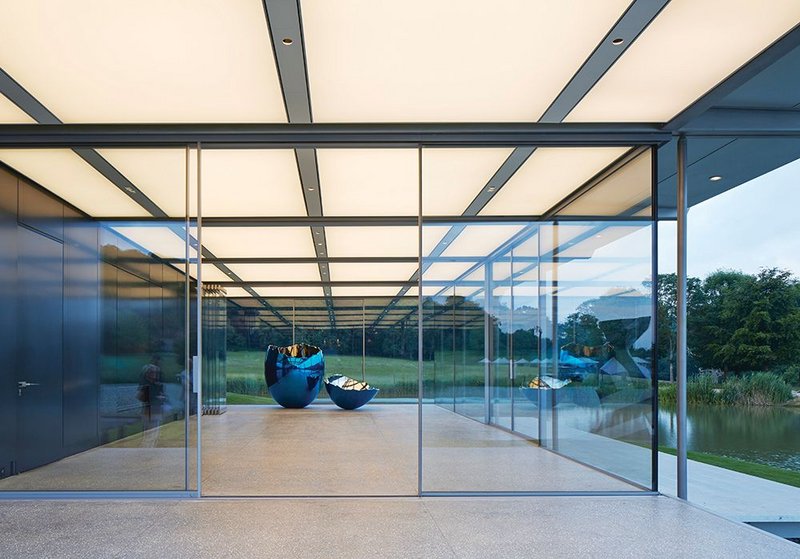 We are in the 18th century, when wealthy landowners employ architects to improve their country estates, dotting eye-catcher buildings about to add Arcadian interest. Or we might as well be.  The 2,500 acre Wormsley Park in Buckinghamshire is the country seat of the main English branch of the Getty family. Restored by the late Sir Paul Getty, it possesses some intriguingly eccentric additions made by him, including a private cricket pitch based on the Oval, a library extension to the Georgian house in hybrid medieval/neoclassical manner, and a lake complete with rustic cascade and island. His son and heir Mark Getty has continued the tradition in modernist vein, steadily opening up the Chilterns estate with its organic farms, wooded hillsides and rare circling red kites to more public events.  And this is where Robin Snell comes in.

Snell – formerly with Hopkins where among much else he was project architect on the Glyndebourne Opera House – designed the Garsington Opera Pavilion which Getty offered to host when the company was forced to move from its eponymous former home at Garsington Manor near Oxford. Designed and built rapidly to be wholly demountable, the idea was that the low-cost, lightweight 600-seat opera pavilion would appear every summer and then disappear into storage as its predecessors had. But the award-winning building (RIBAJ, June 2011) was so evidently good and well-considered as an intervention in the landscape that Getty waived the need for it to be dismantled. Since then it has been modified and extended to give it a backstage area and – with a design life of approximately 30 years and the blessing of the planners – is now as ‘permanent’ as many more conventional buildings, with Shakespeare as well as opera being planned. 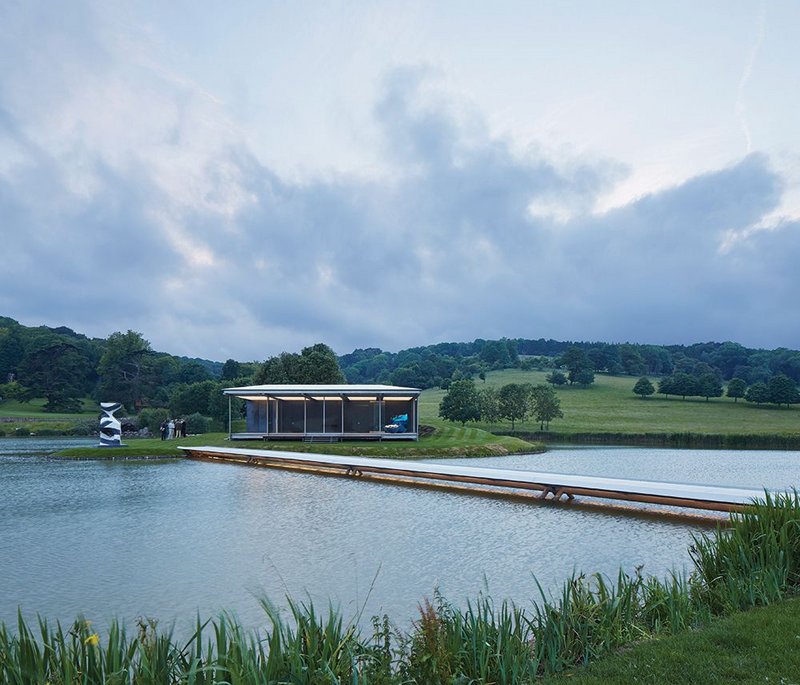 The Island Pavilion is reached by a bridge that barely skims the surface of the lake. Credit: Dennis Gilbert

What happened next was that Snell (now in practice with another senior ex-Hopkins man, Bill Taylor) found himself being approached by Getty himself as client, rather than the opera company. Snell is now working on a variety of buildings on the estate for Getty and the key one, just completed, is fully in the 18th century tradition: a kind of temple, on the island in the lake, complete with a connecting bridge.  It is a piece of pure modernism in stainless steel and glass, and its sacred focus is a sculpture by Jeff Koons:  Cracked Egg (Blue). The rest of the pavilion is dimensioned from the dining room in the 18th century house and serves as a year-round intimate entertainment venue – for private family use, hired out for receptions, used for music recitals or small art exhibitions. The day I went to see it, it was being used for a lunch press event involving a luxury watch company and an equally high-end champagne marque . Fully serviced, it has a small preparation kitchen and washrooms at the back of the plan.

Unlike the opera pavilion, the 150m2 Island Pavilion was designed from the first, with the support of local planners, to be permanent.  The materials are of accordingly high quality – stainless steel (structure as well as cladding), sliding double-glazed panels, and a pale grey terrazzo floor.  The island – made in the 1980s with excavated spoil from the lake – was reshaped and stabilised. Foundations are steel-piled.  There is a touch of the Farnsworth House about it – the way it hovers, approached by shallow flights of steps – but this is as much a homage to Jean Prouvé, whose furniture is specified inside. It is a portal frame, but with the strongly expressed L-shaped beams for rear wall and roof, pin-joined where they meet the floor, resting lightly on slender stainless steel columns at the front. 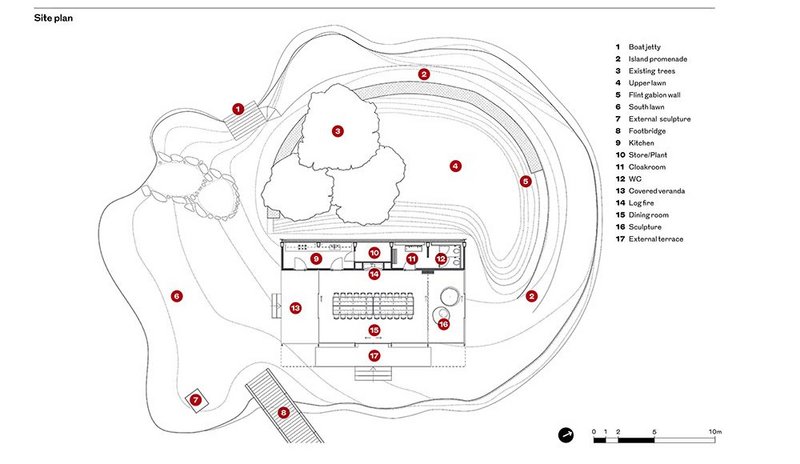 The rear wall wraps over the roof, using a specially-modified cladding system from SAS which avoids standing seams and is fastened through a continuous membrane using patented stainless steel watertight fixings. The roof has a shallow rear pitch, so draining backwards. All the stainless steel is bead-blasted to give it a matt finish, in contrast to the extreme shininess of the Koons sculpture.

Again unlike the opera pavilion which is designed for summer use only, the island pavilion is a fully-insulated year-round building: it even has a fireplace. An acoustic ceiling softens noise reflections. But it has one thing in common with its bigger sibling: apart from the terrazzo it was entirely prefabricated, logically enough in view of its small island location. Given that, the six months it needed on site seems quite generous – but that timespan included the building of a 42m bridge of 100m2 area, a broad perforated-deck walkway with no handrails, just upstands along the edges. Set very close to the water on concealed steel supports, it is illuminated from beneath at night, when the pavilion itself becomes a lantern visible from the opera house and the modular dining table is pulled apart to allow a clear view to the Koons.

Opened in June for the birthday party of Getty’s mother, this is a deceptively simple little building: much thought has gone into the making of it while it and its bridge are oriented as part of a considered development plan for the landscape. ‘It’s become the focus of the estate,’ says Snell as he surveys that landscape. ‘Now we need to move some trees.’ 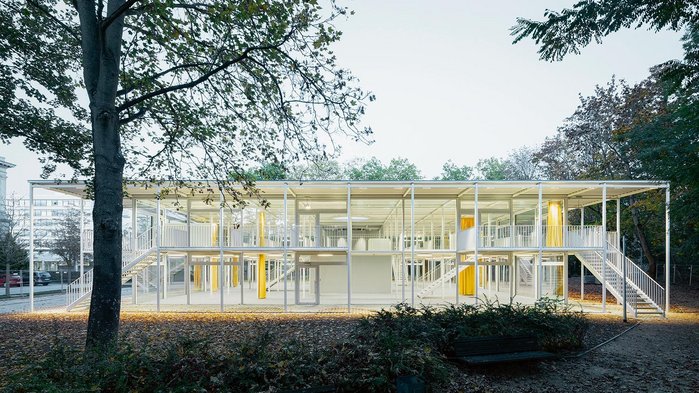 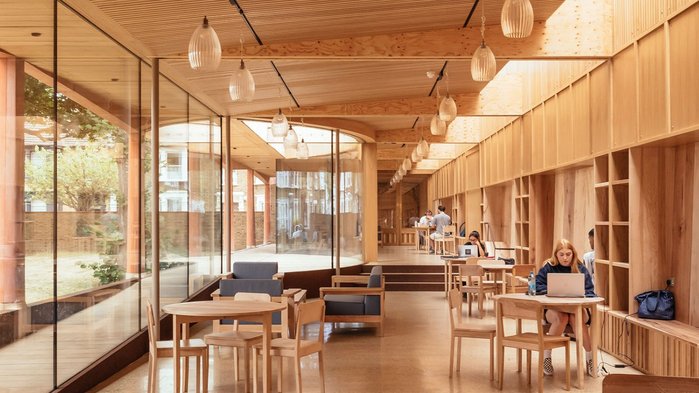