Is our thinking too narrow? A house that generates surplus energy prompts a holistic alternative to the problem of retrofitting existing homes 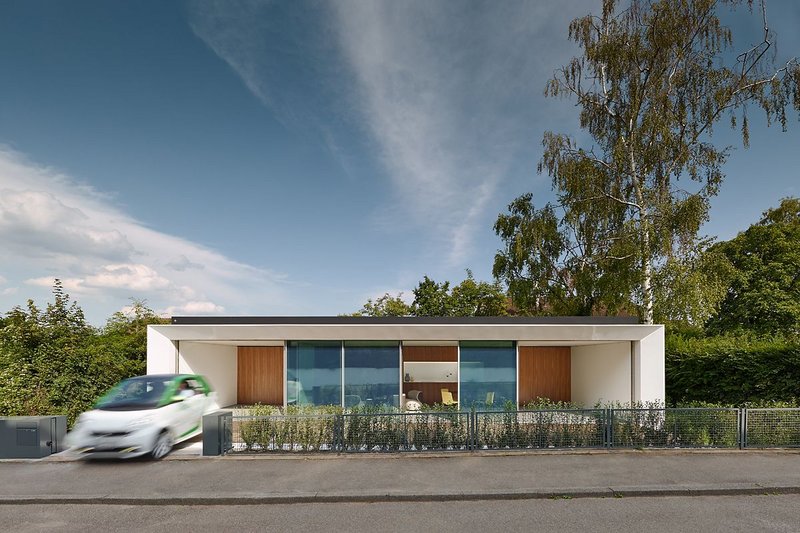 The Weissenhof Estate, set on Stuttgart’s Killesberg hills, made a name for itself when it was established in 1927, as a hot bed for the young trailblazers of the modern movement. With designs that embodied new ways of living (the ‘Neues Bauen’), the likes of Mies van der Rohe, Le Corbusier, JJP Oud, Hans Scharoun and Bruno Taut, adopted design strategies and building techniques that were to prove exemplars for the future of housing.

The legacy seems to be living on. Running along Bruckmannweg behind the famous Mies apartment block, on a bombed-out plot formerly occupied by a house designed by lesser-known modernist Richard Döcker, a new housing exemplar has been constructed which is now in live testing. Designed for ­client the Stuttgart Institute of Sustainability, B10 Aktivhaus is the brainchild of German engineer/architect Werner Sobek and is in effect a live research project looking into how innovative materials, structural design and technologies can generate new, sustainable construction approaches. The result is a pre-fabricated model home based on ­Sobek’s Triple Zero concept of zero energy, zero emissions and zero waste. It offers a new living aesthetic – not only about the design of the home itself, but one which posits questions about holistic sustainability and global ­energy management.

The result of a high performing envelope, a sophisticated energy concept and a self-learning BMS system, the B10 home generates twice as much from sustainable sources as it requires for its own needs. The surplus energy is used to power two electric cars and the nearby 14 and 15 Houses, built by Le Corbusier, now home to the Weissenhof museum. Combining the charging infrastructure and building services equipment to generate, store and manage energy in a central element, the B10 Aktivhaus  creates a clear link between user, building, vehicle and the smart grid. It has also made inroads into modular design innovation: Werner Sobek’s office had only nine months to develop the concept before starting construction in the factory. Developed in a factory over a year, the volumetric design, formed of a thin services ‘spine’ and a living module, was craned onto site in one day. 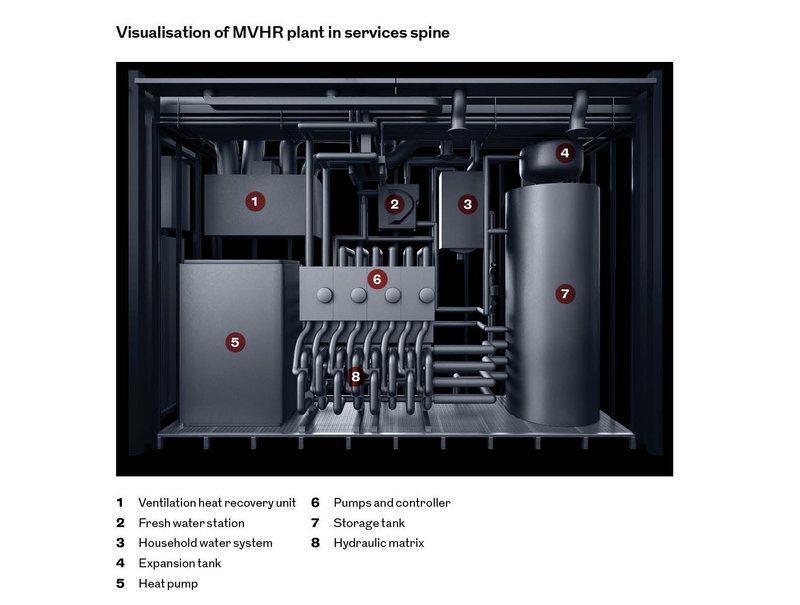 Werner Sobek’s Frank Heinlein says  the firm looked at a number of structural and envelope approaches, but kept in mind that this was a temporary project and that design drivers should be based on that. While steel structure had a sustainability argument over the long term, the firm went for a 14.5m by 6m by 3m high timber structure atop a steel beam frame sitting on eight concrete supports that tiptoe among the remaining footings of the original Döcker villa. Heinlein said that since they weren’t looking to reinvent the wheel, they opted, with timber fabricator SchwörerHaus, for a standard 160mm thick softwood timber frame with similar thickness rigid insulation infilled between timber studs. Wall thermal performance was augmented on the inner face with 38mm Porextherm vacuum insulated panels (VIPs) held between 40mm battens onto which was attached 16mm OSB board and a finishing layer of plasterboard. Applied to the outer timber face was 16mm Cospan board with a sarking membrane; a 110mm gap hiding drainpipes etc separated it from the textile outer surface. This yielded a U-value of 0.11W/m2K across its 400mm total thickness. Running around three sides of the building, thermal losses through the envelope are thus restricted in the main to the glazed north-west facade.

Strangely for a country that tends to be at the vanguard of sustainable product development, Heinlein notes that the firm had to look to China for the facade glazing. Beijing Synergy Vacuum Glazing was approached to fabricate the 3m by 3m ceramic-sealed vacuum thin glass, double-glazed panels, with a thermal performance that could only be achieved with far heavier triple glazing or a translucent Nanogel-filled cavity. These were installed within a thin-section aluminium frame with automated horizontal blinds connected to the BMS to minimise solar gain (apart from low-lying winter sun). The firm also looked at mitigating thermal night cooling by developing an innovative hinged front patio deck that pivots up in four sections to ‘close off’ the whole glazed facade and ‘seal’ the building.

The fabric’s high thermal performance means that very little generated energy is actually used for heating or cooling the house – resulting in the building generating 200% of its own requirement. The building is heated through a combination of a 15m3 ice storage tank located in the ground beside it, and a photovoltaic array. Connected to high and low level cooling pipes in the house via a heat exchanger, the tank (insulated from the ground with glass ballast) acts as a heat well which can be drawn from in winter and summer. Water gradually freezes over the winter months as residual heat is drawn from it, with the ice then being used over the summer months to cool the building. It’s a passive system because the only energy required to power the water/glycol circulating pumps is from the rooftop photovoltaics. 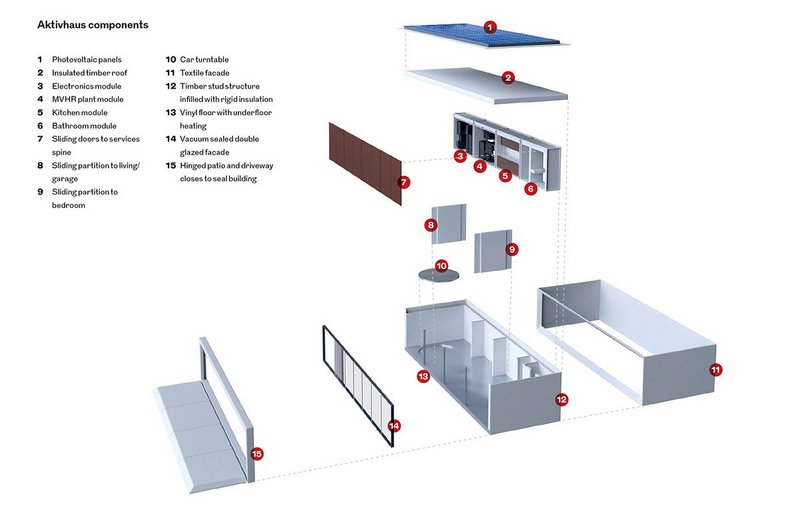 But oddly, the incredible envelope efficiency of the B10 Aktivhaus and its ability to generate far more power than it uses has highlighted the shortfalls inherent in volatile sustainable energy markets and the perverse scenarios that can arise in energy trading. Heinlein reports that when the sun shines, Germany generates a surplus of energy, resulting in negative energy prices and the need for the nation to pay bordering  Austria and Switzerland to take it off their hands. Not only that, but the country pays again to buy it back when demand rises. On a small scale, the Aktivhaus, with its 11kWh battery allowing it to store energy on site and with the ability to feed energy to the neighbouring energy profligate building, posits a more holistic approach to energy management, one which relies on some buildings performing less well than others. An energy model on a national scale, connected to a smart grid, balancing underperforming with overperforming homes, could avoid this costly international trading. Given that Werner Sobek’s own research concluded that Germany simply can’t afford to retrofit every home even if it wanted to, it suggests energy management as a workable alternative to retrofit.

Talking of the holistic nature of the buildings of the Weissenhof, Richard Döcker once said: ‘Just as the individual space, the room, the piece of furniture, the aperture, the material, the construction system etc, are interdependent members of a specific whole, the building itself is only one stone in the manifold structure of an urban organism.’ Given the possible scenario presented by the efficiency of the B10 Aktivhaus, the modernist’s words seem as prescient as ever. The new ‘shock of the new’ could well be an electric one.