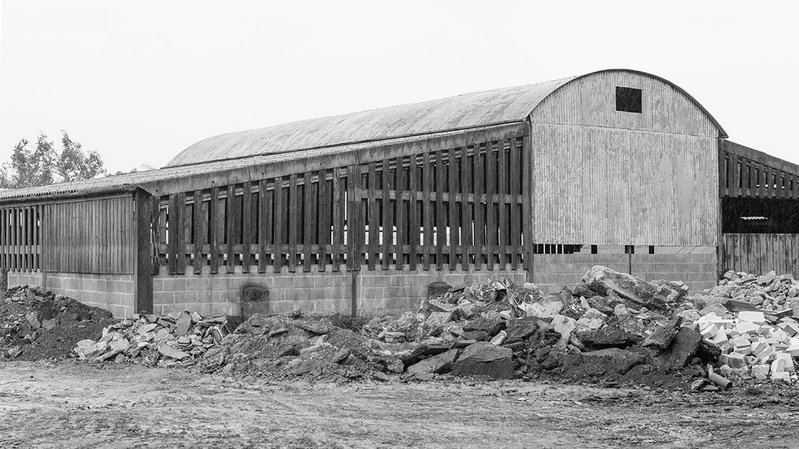 Eleven years ago, tiring of the banality of dinner party conversation in London, fashion art director Jethro Marshall moved to west Dorset with his young family. But while he may have left the bright lights and big city, the urge to think creatively about his environment remained. West Country Modern was the result – an ongoing photographic project documenting the rural landscape he lives in with the aim of countering accepted notions of what the pastoral is and how it is represented. ‘In the first of three books on the subject, I started by making a critical photographic study of local agricultural architecture,’ he tells me: inspired, he adds, by the work of Bernd and Hilla Becher. ‘I ended up calling it “Farm follows function”.’

So Marshall circumvented the bucolic, golden, ‘Cider with Rosie’ view for dispassionate, black and white, nuts and bolts representation. On the Devon/Dorset border, so many aspects of this barn structure caught his eye that he felt it deserved a portrait. He delighted in the curious interface of the curved metal roof with the new wings, added where the original barn walls had been removed. Marshall responded to the wings’ vented timber half-walls, giving them a real sense of lightness; and at the base of all that wood and corrugation, an asymmetric breeze block wall acting like some form of rural rustication – a ‘brutal set of materials’ that, together, took on its own strange beauty.

Following it up with the later ‘Coastal brutalism’, that looked at concrete at the seaside, he is planning his third volume on the area’s rural roads – a study that, by default, may be devoted as much to Devon’s hedgerows as its lanes. A long and winding read, one presumes; a concrete bus stop serving as an occasional caesura.