Four decades have passed since the turbines last turned at Battersea Power Station, and for most of that time it’s been hard to tell if its story was unfolding as comedy or tragedy. There have been enjoyably madcap schemes that might just fly, yet at the same time a sad sense of what was at stake: a totemic piece of prewar industrial architecture, with majestic art deco interiors by J Theo Halliday and jazz-age exterior by Giles Gilbert Scott, seemingly too damaged, too expensive, perhaps too big to rescue.

Its first owner removed the roof of the boiler house ­– the building’s colossal centrepiece with 103m-high chimneys atop muscular ‘wash towers’ – before abandoning plans for a theme park. Hong Kong developer Parkview flirted with schemes for sundry hotels and fun palaces from John Outram, Grimshaw and Ron Arad, but never laid a brick. Ireland’s Real Estate Opportunities commissioned a Rafael Viñoly masterplan for the 17ha site but went bust, prompting another flurry of proposals, from a football stadium to Terry Farrell’s bid to preserve it as a kind of classical ruin.

In 2012, however, a new Malaysian owner adopted the Viñoly plan, including its straightforward commercial uses for the power station, appointing Wilkinson Eyre as architect. After the many civic and cultural options this was an anti-climax, but the realised scheme is radical in its own way, says project director Sebastien Ricard. ‘Everybody likes to say their buildings are mixed use, which means resi with shops below. This is a true mixed-use building, in some ways more like projects in Asia than Europe’.

Its layer-cake arrangement, with some connection between the disparate parts – office staff enter with shoppers – is bold and clever. Six floors of workspace take up the top half of the boiler house, providing as much area as the Gherkin. Sandwiched in the middle are plant (usefully freeing the roofs) and a 1400-capacity events venue. At the bottom, more than 100 shops and restaurants occupy three floors, extending through the adjoining turbine halls and their attendant ‘switch houses’ on the east and west sides. Flats fill the upper floors of the switch houses and boxy glass additions on the rooftops.

In its original use and as a ruin, the power station’s defining quality was its sheer size. For Wilkinson Eyre, says Ricard, as we approach below looming brick cliffs, that was also the project’s central preoccupation. How can the scale of a place for people coexist with that of industry, and how do you fill the building while retaining its dramatic power? 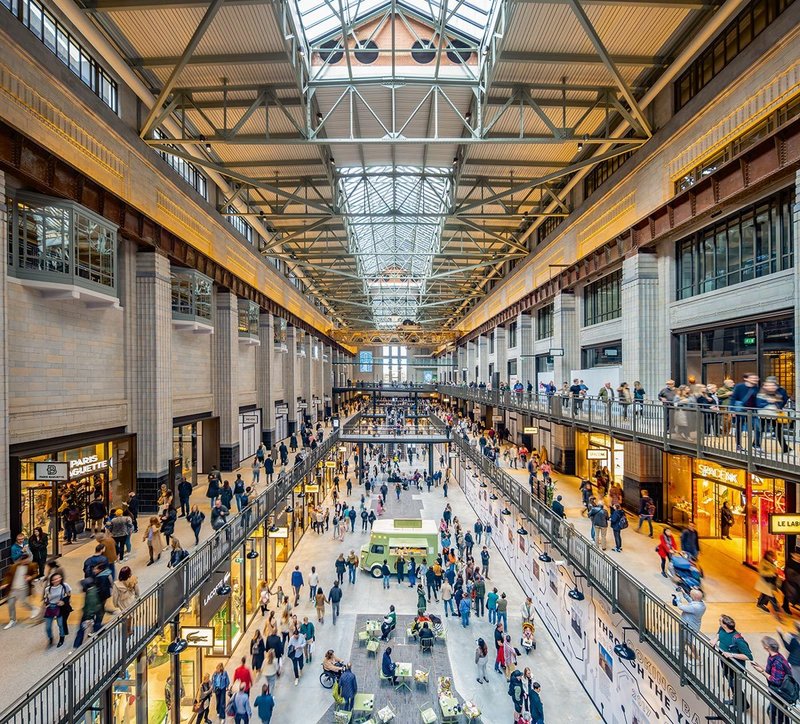 Accents in the flooring and balustrades replicate the rhythm of columns in Hall A. Credit: Backdrop Productions

In the congested boiler house that job falls to the entrances. To the south a sunken piazza funnels visitors into a full-height atrium behind the facade – revealed as a thin screen of bare brick, pinned in place by a spider’s web of steel cable. Ahead, behind a glass wall, lifts ascend through another top-lit void to the offices. Pockmarked brickwork testifies to former decline. ‘It would have been a crime not to respect the nature of the building’, says Ricard. ‘People should see the heritage, not just a shopping centre’.

Black steel bridges and chunky staircases that ring the north atrium reinterpret the building’s butch riveted frame in more polished form – albeit tougher than a typical mall – but it’s only a pair of giant tree-like columns that match its heroic confidence, branching into two-storey-high crowns to carry the office floors. It’s a thrilling glimpse of the effort required to re-engineer the building, but a rare one. There’s dramatic potential in a 10m-deep chamber that extends from the building to the river to accommodate a district heating system, for instance, but it is wholly hidden.

That reticence is appreciated in the turbine halls – the best preserved interiors, where Wilkinson Eyre has endeavoured to let the building speak for itself. The first, built in the 1930s, offers an unlikely combination of dainty decor and industrial heft. Gantry cranes remain in place under an invisibly strengthened lantern roof, while walls are lined with columns encased in fluted faïence, and topped by rusty steel beams.

Very little of the surviving fabric is shown in a distressed state. Tidying up the halls is no great loss: when I visited 10 years ago their condition was not instructive or romantic, just shabby.

What was most striking then was the impression of tremendous volume, which easily survives the insertion of slender steel structures to make two shop-lined galleries above the basement level concourse. Additions are carefully subservient to existing fabric. Bronze shopfronts are structurally independent of the columns they sit between. Glass collars separate walkways from the columns. Oblique views of the balustrades reveal a Greek key motif picked up from an existing balcony.

Hall B, completed in the austere 1950s, is also faïence-tiled but plainer – less precious – and the architect’s anguage is adjusted to suit the context: glass-sided escalators display their mechanism, and the steelwork is grey, bulkier and more utilitarian. These distinctions – variations on a theme – are well judged: subtle enough to seem consistent, but legible as you move through the building.

Much of the most impressive work, though, is the meticulous and imperceptible restoration of both special features, like the opulent control rooms, and of the building’s ordinary fabric. All four chimneys were reconstructed, with contractors using wooden shuttering and hand-poured concrete to replicate markings on the originals (for £20 you can ride up one in a glass lift). Six million bricks went into Gilbert Scott’s facades, but much of the surviving masonry was cracked by rusting steel and acidic flue gasses. For the repairs – including replacement of both flank walls of the boiler house – 1.8 million bricks in 12 blends were sourced from the original makers.

Neither is it obvious how much adjustment has been made to the facades, without losing the impression of mass and solidity. Almost 120 tall slots were cut to provide the numerous steel-framed windows required by homes and offices, but they play well with the ribbed brickwork of the wash towers.
Inside the Switch House flats, however, it’s quickly clear that conversion entailed quite a bit of planning agility – among 254 flats there are 109 different types – and some compromise. Windows appear in eccentric positions, or terminate at eye-level, and ceilings are low.

There are compensations, though. Stepping into one residential entrance in the base of a concrete-lined wash tower produced another of the building’s catch-your-breath moments: a glass lift ascended through a Piranasean web of riveted steel girders and disappeared into darkness high above. Residents’ gardens are another hidden wonder, reached by bridges over plunging canyons in the roofscape, with the £7 million glass-walled ‘sky villas’ cantilevered overhead.

Descending again through Switch House West, we were into the third hour of the tour, moving at a decent clip, and yet still every stop brought something new: a different way in which some unique feature of the original building has been re-presented, or Wilkinson Eyre’s palette of black steel, corten, concrete and wood has been composed in response to innumerable specific conditions. It’s this combination of consistency and variety, and the rare luxury of inch-by-inch design attention, that avoids the common consequence of bigness in architecture – that it must either become incoherent or generic.

‘It’s the most complex thing we’ve ever done,’ says project principal Jim Eyre. ‘Projects like Garden by the Bay in Singapore are on a similar scale, but nothing has required a team of this size’. The practice put in 454,000 hours, made 10,000 sketches, issued 15,000 drawings and reviewed many times that number.

The developer won’t disclose exactly what all this cost, but it’ll be another big figure. Its CEO, Simon Murphy, says the investment will be recouped in part through rising values in the wider development – great lumps of high-end housing that already cluster round the building on one side, with more to come on the other. It’s a shame that salvation required a Faustian bargain, and that some of what made the power station so charismatic has been lost, even as more has been saved. But for all that, with the building’s future assured and its best bits accessible for the first time, this long saga has a happy ending.