Tony Fretton Architects' new town hall in the Belgian city of Deinze is designed to last 100 years. Is the as-yet surplus space – and its cost – an irrational burden or prudent planning? 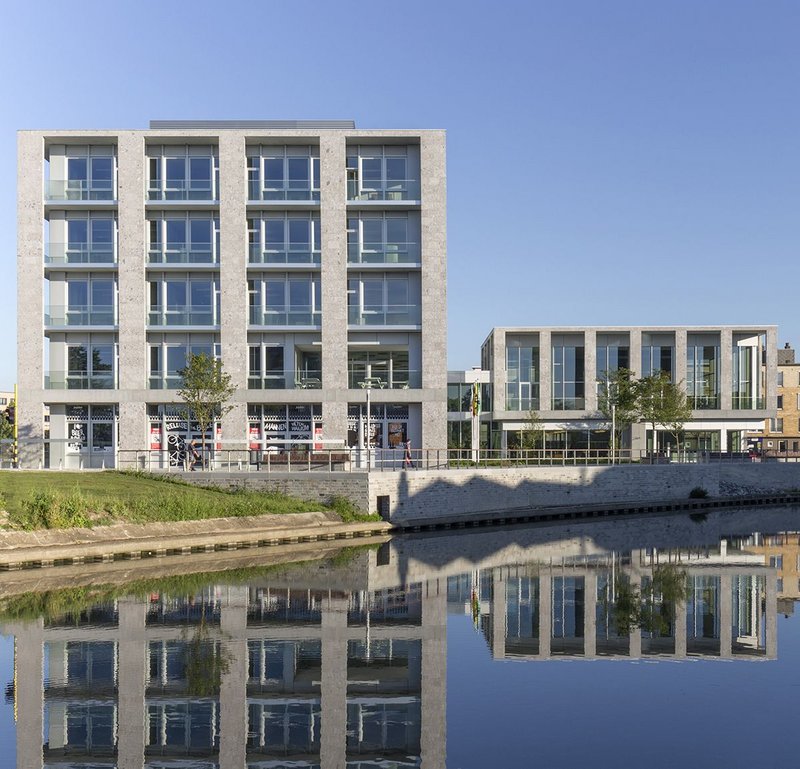 What does a building built for 100 years' time look like? Credit: Peter Cook

The modern Deinze City Council can only have been traumatised by its previous town hall. Its struggle with that 1840s classical, porticoed building jammed into the main market street of Deinze in Flemish Belgium, with poor circulation and little room for expansion, led it to commission a new home without those features – and one that the council wouldn’t outgrow for 100 years.

Normally such an approach would be admirable – so many clients could learn from its emphasis on long-term investment, use, materials and timeless architecture. But put into practice here at Deinze’s new Town Hall and Administration Building, where Tony Fretton Architects has extended the idea to its fullest interpretation, it looks over the top. One hundred years of inflated heating bills, 100 years maintenance, 100 years of  additional material – the cost of which all is all borne now, before it is properly useful, on a site that was formerly a car park and has room for adding a wing or two in future. Civil servants are swimming in space – desks are 2-3m long, most non-facing and so far apart that an internal online messenger is essential. The CEO’s office is the same size as a decent one-bed London flat, with as many rooms.

‘There is a strategy here for 100 years,’ says the city’s head of planning, Peter Coppens. ‘Every change that is coming has to be accommodated in the building. The evolution of the city is so rapid that we weren’t going to build something that would need an extension in 10 years’ time.’ 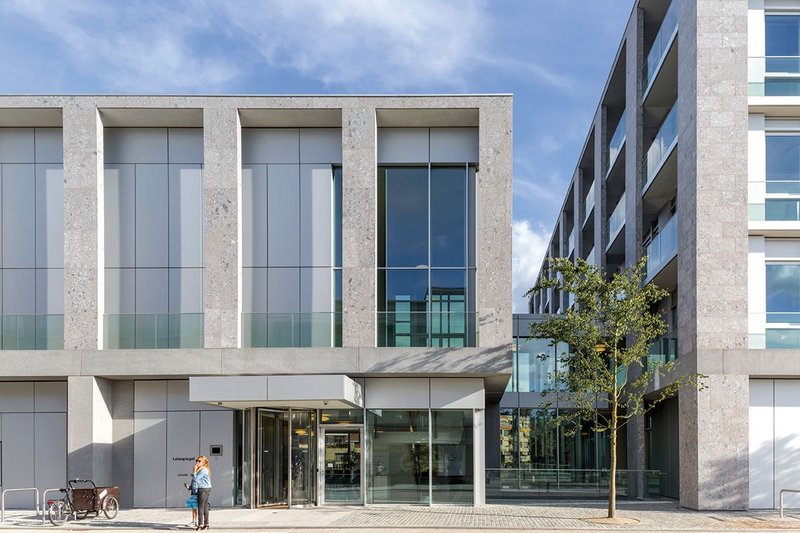 The north side public entrance for visitors arriving by car. Credit: Peter Cook

As Flanders is already one of Europe’s most populated regions, one wonders on which wider forecasts and measures Deinze based its predictions for the building’s needs. Whatever they are, the city is positive it will need a big council with office space for at least 100 employees. Perhaps it foresees massive population growth for Flanders as a whole, or a mass relocation of people from the countryside (what will be left of it), other cities, such as nearby Ghent, or other countries – no one seems to say. If the city sustains its current growth of 1,000 new inhabitants in 2015 the size of the council’s offices could prove right, but for the moment it administers not quite 31,000 people – it’s a town by UK standards, the same size as Wisbech, say, or Warwick.

But the ambition and quality of investment taking place in Deinze is remarkable, as especially compared with its UK equivalents. Fretton’s Town Hall is a durable, high-end building clad in Italian stone and fitted out with particularly exquisite terrazzo. Where was  value engineering, and where is austerity?

This is provincial Belgium, the country’s 78th most populous city in a total population of 11.2 million. Shops and restaurants close at lunchtime, old ladies with short dyed hair and metallic sheen down jackets pack out the cafés during the day to the tune of 48 carillon bells ringing every half an hour across the centre, and in the town’s planning department – which recently decanted into its new 3rd floor office in the town hall to breathe and flex its fingers a bit more – city models are laid out like moveable pieces in a strategic game of chess. Deinze doesn’t have an attractive historic centre by most Belgian standards, yet the city council has the determination to make it at least very habitable and comfortable by adding bridges, public buildings, hard landscaping along the river, and parks that punch well above the city’s weight and size. Fretton’s Town Hall completed last year, this year will see the opening of a new academy of arts by WIT Architecten and Lens°Ass Architecten, and next year a new cultural centre including a 450-seat theatre designed by Ghent-based Trans Architects and V+ will start on site, finishing in 2019.

‘Flanders did not have a recession,’ explains Fretton. ‘The humorous part is that because the country had no federal government for so long [between 2010 and 2011], it had no austerity either. Everyone kept spending.’

The Town Hall, which cost around €16.7 million, is part of around €40 million overall spending that Coppens puts down to the council having saved a ‘pot of money’ – and stands in stark contrast to similarly sized cities in French-speaking Belgium that can look stuck in post-industrial decline. The idea of building a new town hall was first mooted in the 1990s. The open call competition was facilitated and launched by the Vlaams bouwmeester (Flanders’ chief government architect) in 2009. More than 100 design practices entered, which were whittled down to 10 by the bouwmeester, then to four by the council: Ghent-based De Smet Vermeulen Architecten, Antwerp-based AWG Architecten, Paris-based uapS and Tony Fretton Architects.

It is restrained and tempered at scale, yet in its fine details there is a perceptive architectural excitement and joy

The brief was made for a spacious, light and flexible building that had great views, healthy workspaces, was a public place for citizens to wander around in at will and was representative of Deinze. In response to a city masterplan by Marie-José Van Hee Architecten in 2007, the town hall would be moved from its present location in the market street, to a car park along the river bank in front of the existing Deinze museum and art gallery, reorienting the city centre from its primarily north-south axis, to expand it east and westwards along the charming River Leie, and to make that the driving force of creating quality urban space with leisure and promenade. In the process, parking would be pushed further out to sideline cars’ domination in the city centre, and green transport such as cycling encouraged.

Aside from the sheer size of the building, which Fretton argues is no business of an architect’s to question, this is a hugely rational scheme. If you accept what it is, what the client thought it needed in terms of space (in the face of contemporary working practices), the Town Hall is exemplary and answers the client’s brief. For starters, the stone and concrete exterior, slightly sober and puritanical, makes it feel Belgian in the best possible sense. It has a right to belong in its robust, quotidian surroundings of 1960s straight lines and large horizontal windows. 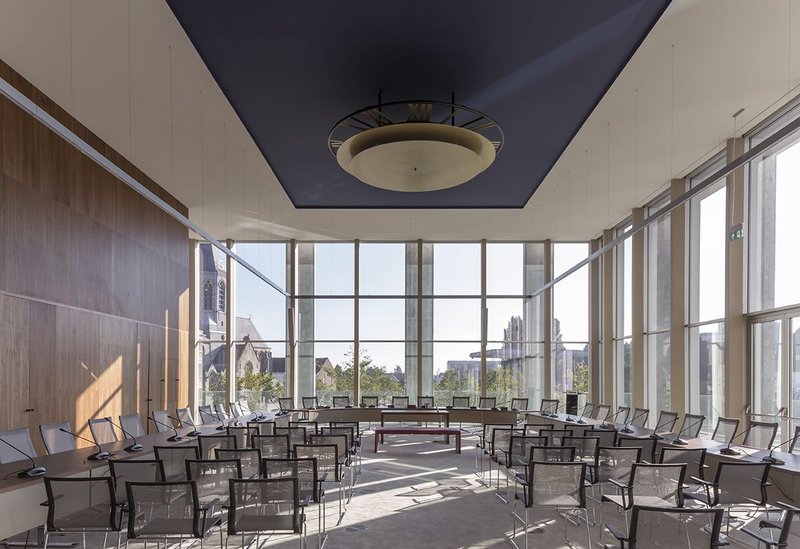 The council chamber is fully glazed on two elevations to overlook the city centre and river. It will also be used for weddings and other public ceremonies. Credit: Peter Cook

‘The attempt was to make a real public building which embraced not only the qualities of the church opposite on the edge of the river but was also generous to the 60s buildings in the background,’ explains Fretton.

At the same time, the Town Hall commands a site and form that give it a knowing presence. The 8,000m2 building is split into two parts: the council chamber brought forward from the administration volume into the new public plaza in front, offset from the main city shopping street; a canopy above the entrance makes it welcoming. It is restrained and tempered at a large scale, yet in its fine details there is a perceptive architectural excitement and joy. It achieves its aim of reorienting the city, creating a new slightly grandiose public quarter with the 1970s museum and gallery, leisure centre, police and fire stations, and upcoming cultural centre fanning out into green space behind.

Inside, this rational and generous approach continues. Jutting into the new square and partly facing the bridge and church, the building’s two wings can be separated from each other programmatically. The almost independent smaller, lower frontispiece, which on the ground floor is the main public reception and gatehouse for the building, gently introduces the building into the city, with space and seating for citizens to mill around. From here visitors can either proceed towards the administrative building through a glazed connecting corridor, or ascend the stair with its smart cherry wood handrails to the double-height council chamber itself – which occupies the entire 250m2 footprint of this pavilion-style building in the square. The scheme’s layout allows the Town Hall to function separately from the administrative building behind out of office hours or at weekends. The move also distinguishes the chamber’s functions from administration by becoming appropriately ceremonial for its additional uses including weddings and civil ceremonies. Sound in the elegant room is dampened by the carpet and leather clad columns to feel appropriately composed.

Meanwhile, in the five-storey administration wing, there are fewer and fewer public services the higher you go. On the ground floor are the civil affairs bureau for registration matters laid out in booths, public toilets accessible from inside and out, tourist information and an upcoming café that will animate the square. The first floor, which also connects to the chamber at this level, houses councillor offices, meeting rooms and a staff canteen/kitchen which opens onto a pleasant terrace overlooking the Leie. Social welfare offices (OCMW) and meeting rooms are on the second floor; the planning and environment department on the third; and ICT, communications and culture sit on the 4th floor alongside the mayor’s office and secretary. The full-footprint basement contains a garage for the council’s service vehicles, staff bike storage complete with an upcoming drying room, rubbish store, and huge local government archives, one section of which is open as a library for public use.

In the five-storey administration wing, there are fewer and fewer public services the higher you go

This part of the structure is simple with two cores – one for public access opening onto a reception area each floor and one for staff. Architectural treatment is also continuous – removable walls, overhead ventilation, underfloor hot air heating, operable windows, full-height storage around the core with leather handles, brightly coloured carpets in the office sections and terrazzo with beautiful large aggregate in the public spaces. Surrounding the entire floorplate is a circumference of loggias that aid solar shading while creating an easily accessible space for civil servants to step out to for a breath of fresh air or an impromptu chat/private phone call. The major highlight, though, is the way the eastern most corner of the administrative wing seems to cantilever over into the middle of the river thanks to landscape architect Marie-José Van Hee’s  clever jagged rebanking of the river to ‘remind her of the castle Deinze never had’.

‘The plan has already proved the building’s flexibility,’ says Deinze’s Coppens. ‘In the original plans, we did not include the OCMW, tourism service or café because it wasn’t politically correct to suggest this at the time, though we knew we would. When the administration changed, we easily absorbed them into the building.’

My questioning of the extensive space is not criticism. Of course it’s incredible – which office workers wouldn’t want lots of space? How that comes together as a collective force working towards something is different, as well as the environmental implications and the cost to the taxpayer. There are a lot of single offices and while it is generous and plush inside the office floors in general there is an old fashioned quietness and lack of buzz. It’s just a pity the same care couldn’t have been given to the plant on the roof, which was left off the original drawings and, though not very visible in these images, with its aluminium enclosure, overwhelms the building at a city-scale among lower-rise buildings.