Bell Phillips is doing its bit for the housing crisis, providing 77 new homes on three infill projects in east London 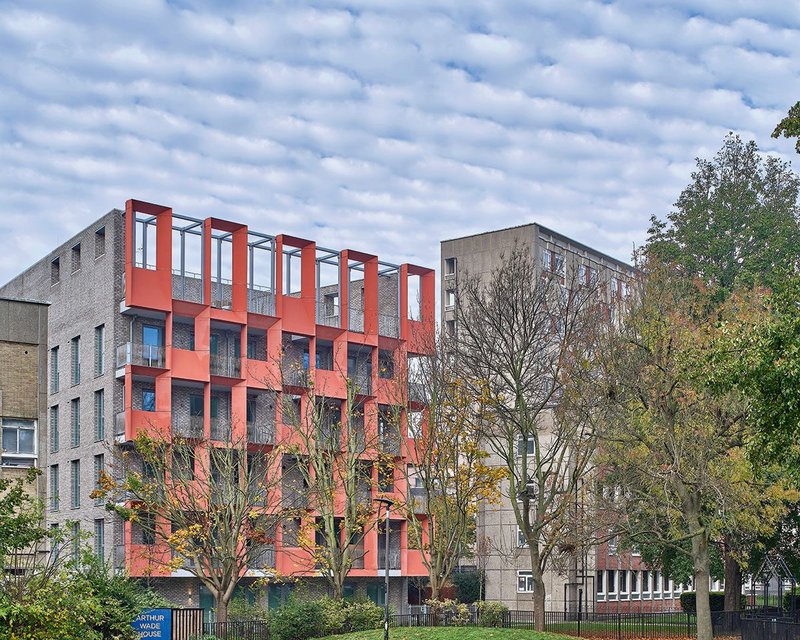 Bell Phillips Architects is no stranger to the challenges of the council housing infill site. Hari Phillips reckons they’ve worked on approximately 30 to planning or built stage. ‘We’ve done a lot of car parks and garages sites – the classic infill sites. We’ve seen them all,’ he says.

And in doing so, it tackled the particular challenges that come hand in hand with such projects. These typically include tricky consultation – understandably, no-one likes to lose their car-parking or open spaces. Often these infills are awkward sites that may have been left undeveloped for a reason, whether proximity to noisy road or railway, or for ­infrastructural reasons. They may well be sites with sensitive contexts, or, contrastingly, sites with a scarcity of significant, surrounding build context to work with.

Bell Phillips has just added three more car park infills to its portfolio, all for the London Borough of Tower Hamlets, which together provide 77 units of much-needed new social housing. In doing so, the practice has not only navigated most of these issues, but sought to address some of the residual problems of each site.

‘It’s like micro-surgery. In that small ­intervention, you’re trying to repair past mistakes,’ says Phillips.

The most visually striking of the three East End projects is Orwell House on Baroness Road, a 20-unit standalone block in the Dorset Estate in Bethnal Green. Here, there was no shortage of architectural context – the modernist estate was designed by Lubetkin, Skinner and Bailey between 1951-57, and features a rich variety of scale and facade composition. The new infill nestles within these and has a rather prime position overlooking a playground and park. It is oriented to address the park while its scale mediates between that of the adjacent buildings.

There is no missing it. Rising six storeys and topped with a roof garden, the otherwise simple grey brick building is adorned with pink, glass-fibre reinforced concrete screens overlooking the park on the east and at the entrance on the west. Designed in reference to the chequerboard design of two nearby buildings on the host estate, this facetted grid acts as a frame to the balcony, with ­alternating solid and open balustrades giving a combination of privacy and openness.

Is the colour too much? I’d say not. It’s certainly bold and confident – the pink tones surprisingly well with the nearby red brick of some of its neighbouring buildings and makes a pleasing focal point. The contrasting red metal frame behind the panels, however, does jar a little when glimpsed from behind along the sides of the new block.

‘We were trying to emulate, but not ape, the older buildings,’ says Bell Phillips associate John Lineen, adding that while the intention was for the infill to fit in, there was also the desire to announce the presence of the new social housing, and this the screen certainly does.

‘It’s a very simple building. The screens were a way of mitigating the monotony of the facade, in the same way pattern was used to break down the scale of the original estate buildings,’ he says.

At the 1970s Locksley Estate in Limehouse, there was no such notable post-war architecture to bounce off. Instead, there was plenty of infrastructure, with the end-of-block site bounded by the Regent’s Canal, a Victorian railway viaduct and a road. Underground utilities are a classic complicating factor for infill development, and here the big issue was the proximity of a large gas main, which governed the positioning of the new development towards the southern edge of the site, with a communal garden instead over the gas main area. The new 33-unit Pyrus House infill rises seven to eight storeys and forms a new, active end stop to the rectilinear block, which previously halted in a blank facade overlooking the car park. Unlike the other two infills, 64% rather than 100% of the flats are dual-aspect, although it does include a number of generous family duplexes on the top floors with two balconies.

It is the first of two – another block is planned at the other end of the estate. The interventions share the same architectural language – brick clad with soldier course detailing and assertive metal balconies inspired by both the viaduct and the local industrial vernacular. The completed block is facetted in form to allow it to address a variety of aspects from its position at a kink in the canal. Robust rather than elegant, this is an appropriately weighty response to a tough context.
The third infill site, Levitas House on Jubilee Street in Stepney, provides 24 council homes in a seven-storey development. With less built immediate context to work with, Bell Phillips performed some urban repair, creating the missing fourth side to an existing garden square. The result provides a more sheltered environment for the central playground and park. It’s not a showstopper, but then it isn’t meant to be. The architect was keen to achieve a good piece of background architecture, with the building stepping up and then down to meet the park. The rhythm of the deep, brick clad balconies animates the yellow brick facade to create a quiet, unshowy gravitas. Three different brick bonds add subtle variety.

‘It’s a good building that’s not too ostentatious – it’s not drawing attention to itself. It just holds the square,’ says Phillips.

Despite the inherently tricky, and often expensive-to-develop nature of many council infill sites, Phillips reckons it’s becoming easier to achieve good results for council-­developed housing. ‘There are challenges, but councils are more experienced now and more aware of how they can get a good quality product out of the design and build process,’ he says. ‘They are invested. They retain the homes and its their tenants, so they are more concerned with the quality of the product.’

With the second Locksley Estate intervention and several other affordable housing projects due to start on site this year, it won’t be long before Bell Phillips extends its infill portfolio even further.