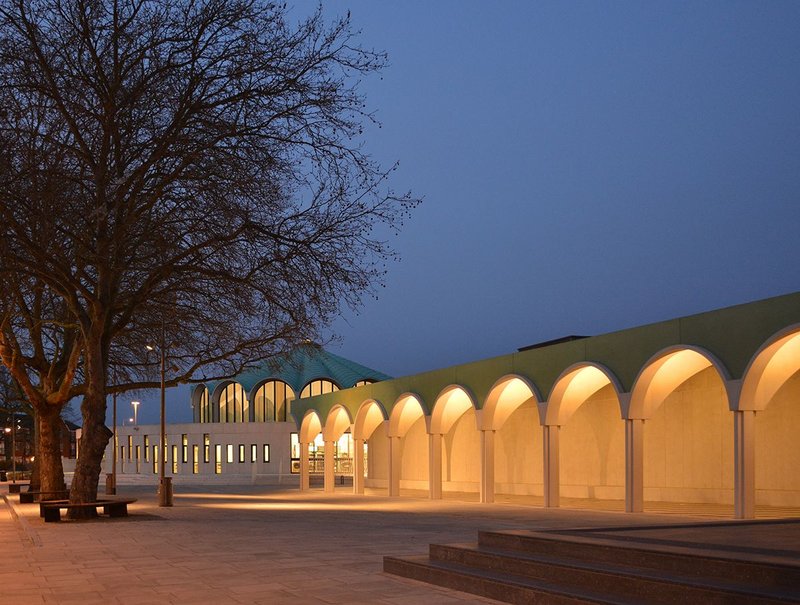 How do you improve an outer London high street that is, commercially speaking, in rude health and in no desperate need of improvement? Scores of declining town centres around the country would love to have the problems of Barkingside, in the London Borough of Redbridge but historically of Essex. It’s not super-prosperous but it is getting along nicely: Alan Sugar of Apprentice fame is a big property owner round here. No, the challenge here was the way mid 1960s civic buildings were dropped in when the Greater London Council was created. It is these that the practice of David Knight and Christina Monteiro, DK-CM, has tackled – in a successfully accretive manner that can also be seen in part as post modernism 4.0.

David Knight met me at the grandly Arts & Crafts-tinged station – built thus in anticipation of a royal visit, apparently – to take me on a stroll that explains how the place developed and why the firm has done what it has. This is where in 1873 Dr Barnado built his first purpose-designed village for orphans, complete with chapel. It’s still there, but its spacious village-green layout is being interleaved with 144 new spec homes branded ‘Barnado’s Garden Village’, so making money for the charity but also making the site considerably less spacious. And so on to the high street – no particular problem there – and finally to the part at the end of the main street that did need attention: the swimming pool/leisure centre and library designed by Sir Frederick Gibberd and built in the mid 1960s.

The problem was a familiar one for the period – good buildings, particularly the listed circular Fulwell Cross library with its scalloped thin-shell concrete dome, copper clad. But they sat in indeterminate SLOAP – Space Left Over After Planning – which made little attempt to integrate with the street edge or enhance the public realm. DK-CM has added infill sections to redress this.

The single most evident aspect of this is the de Chirico-like arcade it has added to mask the flank of the leisure centre which, along with new hard landscaping, has made a much more defined and usable civic square, with power access for live events. The references are clear: Gibberd used the arcades of European towns to illustrate his writing on town planning, and this one draws its form from the arches of his library – but pulled out straight rather than arranged in a circle, and its precast concrete components pre-coloured to match the copper roof. It is this knowing referentialism that makes it the latest generation of PoMo: what look like 1960s railings, for instance, are a new design inspired by the period. Knight says he has no problem with the idea of people soon not being able to tell what is new and what is old.

On the far side of the leisure centre, a high brick wall and service yard have been replaced by new landscaped gardens, forming part of a previously closed-off route through the site. The overall scheme makes a virtue of today’s access requirements with a raised plinth and ramp in dark terrazzo defining the leisure centre entrance, and a related scheme in pale precast concrete around part of the library. This removes some of its original hovering-flying-saucer character but integrates it much better with the square.

In the world of architecture, where the stylistic lines are drawn up, this project might be seen as an assault on modernism. The public, of course, couldn’t care less about that and nor could I: it feels right, though the arcade with its full-length bench along the back needs to be cleaned more often. It is not quite complete: a little shop and public toilet is now being built at the western end – a miniature version of the swimming-pool barn, but timber-clad – while a large public clock is meant to hang at the corner of the new arcade, where the right-angled turn is designed to accommodate it. Here DK-CM has made more of a place out of the found objects of the civic buildings. It is skilful work.