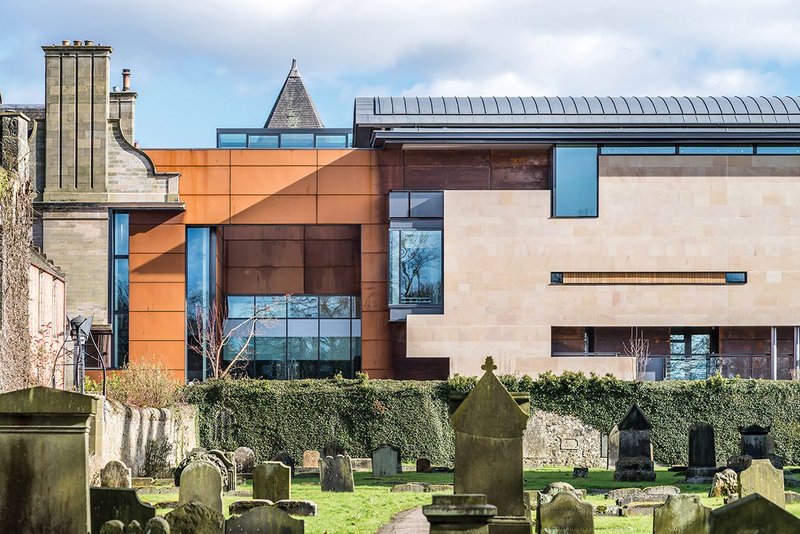 Within small and medium sized Scottish towns civic typology is increasingly redundant as both function and architecture. The traditional amenity of the town is now located further and further away from its core and placed within ever larger and ever more banal, thinly decorated sheds. The market as an accessible and lively source of sustenance for all is superseded by the supermarket, the public bath becomes the leisure centre, the town hall becomes the regional council office and the activity and architecture of democracy and public life becomes ever more distant from those it is meant to serve.

The library is the typology that refuses to die. Even as fewer people use them we still collectively decry their closure and campaign for them to remain within our towns and cities. The now ubiquitous response to this challenge of function is to pretend that a library is not actually a library: it is an ‘ideas store’ a ‘community learning hub’, a ‘campus’ an ‘iplace’ etc. Reading books and the accumulation of knowledge now needs a sprinkling of cool; it has to be an experience. 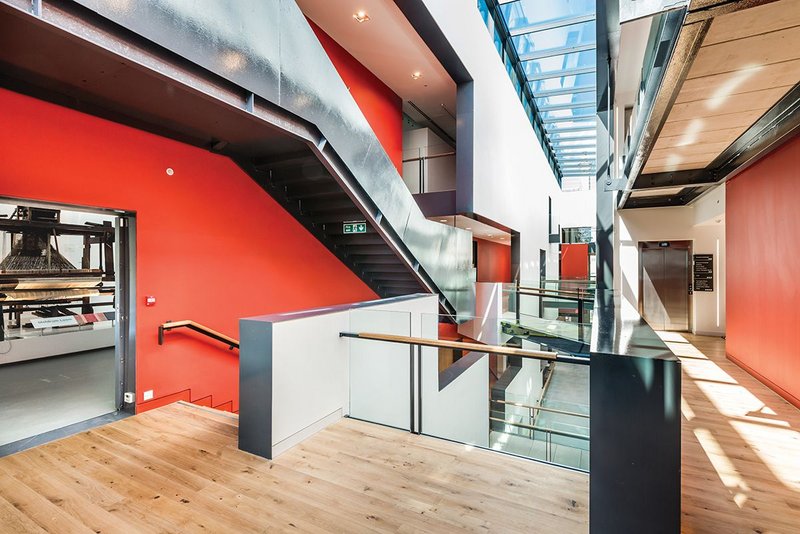 It therefore seems almost quaint and nostalgic for a local authority to determine that a library should remain, that it should still be called a library and that it should continue as an essential civic function within the historic centre of a town. In the case of Dunfermline Carnegie Library, cultural and architectural heritage has been the motivating factor in the retention of the original building and more importantly the retention and expansion of its function. As the first ever Carnegie Library, gifted by Andrew Carnegie for the people of Dunfermline, there is huge local pride in the building and its purpose.

‘There were concerns raised that the library would somehow change and not be “their” library, but in fact the library now allows different types of events, activities and experiences,’ says June Souter, service development manager, libraries, Fife Cultural Trust. ‘This new evolution of the library with the museum, galleries, café and shop, and the new reading room and children’s library, has breathed new life into an old building.’

Richard Murphy Architects’ design retains the Dunfermline Carnegie Library in its current location on Abbot Street while creating new space for a museum and gallery. The extension of the original building into the neighbouring bank and former car park brings this triumvirate of civic functions into a single, accessible and legible site that connects to other key historical buildings within the town, strengthening and solidifying the Dunfermline heritage quarter.

The key to unifying these different civic elements is a new garden on land that was not originally part of the site but was a car park for the neighbouring Abbot House. Without it there was little scope to create a suitable single entrance to the combined library, museum and gallery, a critical element of the brief. Fortunately Fife council was able to buy the car park and the garden now creates a moment of intrigue that is visible from the street, drawing people towards the new entrance and to the main point of orientation from which to explore the different elements.

The addition of a new public space within the overall scheme also creates the catalyst for a new principal and public elevation. This is predominantly a stone facade that has been eroded to reveal inner layers of glass, timber and Corten. The use of oxidising steel as a means of signifying an industrial heritage has become a design cliché, and while the logic of applying a different material condition to represent entry and a move through the facade is sound, the application of the Corten feels somewhat heavy handed.

This, however, is a minor criticism of what is otherwise a thoughtful elevational composition in which the openings have been intelligently informed by the intent to connect the users of the library and museum with other buildings and vistas within the adjacent heritage quarter. These moves create genuine moments of joy, delight and connectivity that were constantly utilised by the visitors to the building during my visit. The scale of the windows and their articulation as distinct elements allows the elevation to be ever-changing as people occupy the openings and in turn become objects within the facade. These viewpoints provide an essential release from the content but also an opportunity with which to reference the stories, memories and objects contained within the museum. 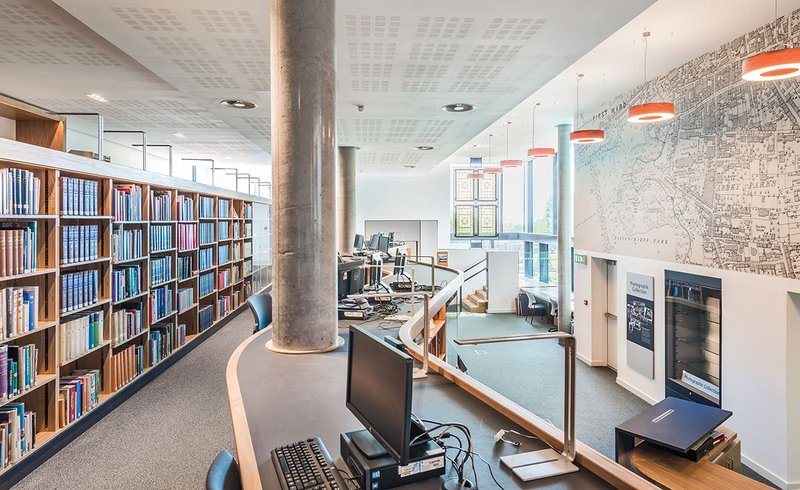 The reading room as ‘a hillside of learning’. Credit: Chris Humphrey

At the entry to the building it becomes clear that the primary device for orientation and circulation is an internal ‘street’, and like any good street this one is full of movement and life as people move along it, across it and into it through penetrations that visually and physically connect it to the programme.  A hierarchy of volumes is strongly organised around three ‘thick walls’ of accommodation running north-south and parallel to each other. These contain all the additional vertical and horizontal circulation and are used for creating unique spaces within the museum and gallery as well as space for the café. I would usually argue that the best location for a café is directly on to a street, but here it works excellently on the first floor, drawing people into the building and ensuring an engagement with content as well as coffee.

The application of barrel vaulted ceilings in the three main exhibition spaces references the main activity space in the original Carnegie Library, softens the impact of the ceiling and continues the exploration of a civic language in terms of volume as well as facade. This additional volumetric interest within the section works especially well in the two new gallery spaces which are also complemented by roof lights that run the length of the room, allowing generous natural light to flood in without producing glare.

Murphy continues to reference Carlo Scarpa in much of the practice’s work and here the detailing is well directed and purposeful without ever becoming fussy or indulgent. It is, however, the non-Scarpa points of reference that really work the best. The internal street, the routes that criss-cross it and the openings that connect the content to the circulation take inspiration from the Museum of Scotland (Benson & Forsyth) and successfully apply them to a smaller cultural building. The reading room (based on a model by Alvar Aalto) is designed to be a ‘hillside of learning’ that looks out beyond the building to the abbey and an adjacent tree.

‘We’ve been able to provide a contemporary, accessible museum that tells Dunfermline’s stories in the heart of the town’s heritage quarter and make the links between the two explicit,’ says Kevan McLaughlin, technical adviser to Fife council. ‘We have bespoke exhibition spaces for the first time. The spaces are secure, flexible and environmentally controlled, opening up opportunities to showcase our own collections and to bring in exhibitions and loans from other museums and galleries.’

With 10 years between choosing the design competition winner and opening the doors, this is clearly a project where the client’s ambition, patience and willingness to invest in design talent has been significantly rewarded. Shortly after winning the RIBA House of the Year 2016, Richard Murphy made headlines by proclaiming that Scotland is the ‘worst country’ in Europe to be an architect. I was intrigued to know what had changed in the decade between winning this competition and completion to make him believe a project of this scale, typology and context might now be an unlikely opportunity for a small or medium sized practice in Scotland.

‘There are two changes,’ he says. ‘Firstly, the RIAS competitions unit, which employed a full-time member of staff, was effectively closed down about eight years ago. That means that not only does the RIAS not really run serious competitions here but the RIBA can’t either as they defer to the RIAS. Secondly, local authority procurement rules have become much more onerous and the “hubco” [public-private procurement vehicle] has been set up to procure design teams. Getting on a shortlist, let alone getting the job, has become much more difficult for medium to small offices or for those who don’t specialise in the building type.’

The Dunfermline Carnegie Library is a project that makes the case for placing faith in the ideas and agency of the architect and for investing in the design of a new civic language and the retention of traditional but still essential civic functions. This project successfully tackles a constrained urban site, issues of accessibility, the introduction of a new programme into historic buildings and the creation of a contemporary language for new civic amenities. Most importantly it makes a compelling case for architecture rather than technology being the primary facilitator for an enhanced human experience within our libraries, museums and galleries.