An infamous bit of London has cleaned up its act with the Boulevard Theatre scheme, but SODA has retained some of the seamy charm of its former Raymond Revuebar site

Soho never has been as good/bad as it used to be. The latest crop of memoirs from those who inhabited London’s famous permissive zone concerns the 1970s and 1980s. When I first knew the place around then, the nostalgia was all for the 1940s and 1950s. The film and theatre and music industries, the artists, the sex clubs and dive bars, the cheap rents exacted with menaces. Doubtless people in the late 19th century talked with fondness of the pre-cholera Soho when it was all music halls and heart-of-gold prostitutes, those in the late 18th century remembered the time when it was distinctly posh before all the aristos moved to Mayfair and the French arrived, and if you follow it all back there was probably someone somewhere lamenting the bricking-over of one of Henry VIII’s old royal hunting grounds.

All this got an airing in a recent ‘Negroni Talk’ in Soho’s Groucho Club (itself a 1980s arrival), stimulated by the arrival of the new Boulevard Theatre by architect SODA on the site of the famous/notorious former Raymond’s Revuebar. The Negroni talks are a congenial informal London architecture discussion forum, run by architect Fourth Space and normally based in its Ombra restaurant in Hackney. So, all very metropolitan and in this case more than a little nostalgic for Old Soho, whatever period that was.

At the turn of the 1980s I knew Raymond’s Revuebar not as a strip joint but as the home of the knowingly-named Comic Strip, crucible of alternative comedy, MC’d by Alexei Sayle, having moved there from the slightly earlier (and still existing) Comedy Store. Television soon claimed the troupe, from Rik Mayall and Ade Edmonson to French and Saunders.  And now I’ve gone back there and it’s changed a lot, though the Revuebar dancing neon sign is still there, remade. The all-new Boulevard Theatre is squeezed into its corset of an alley – Walker’s Court – so tightly that it’s bulging out a bit.

The bulge announces a small (165- seat) circular multi-function theatre, where the auditorium revolves into different configurations as well as the stage being able to revolve AND rise and fall. It and its associated spaces form the western side of a £40 million development of the properties on both sides of Walker’s Court by SODA– mostly new though with some restoration of facades – for the Raymond family’s Soho Estates.  On the eastern side and extending along Brewer Street there are two existing nightclubs (one being extensively remodelled) retail, offices, and apartments. 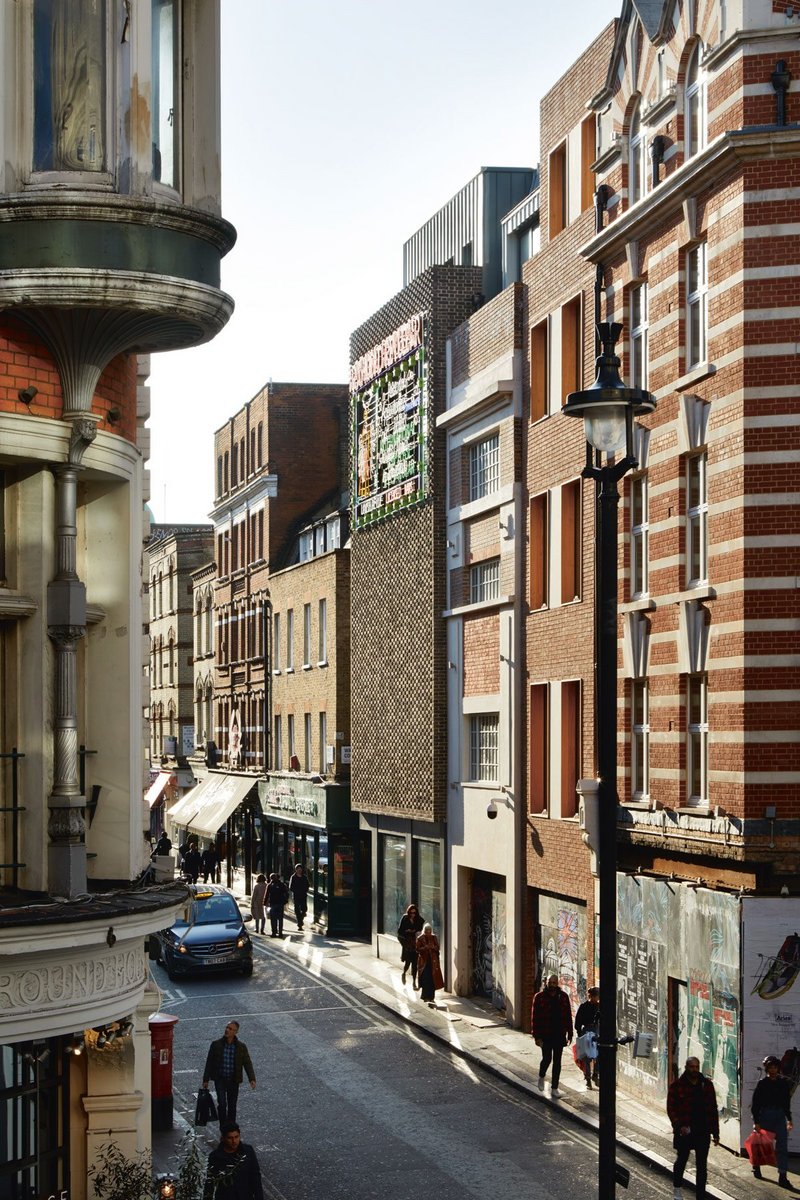 Brewer Street frontages respect the narrow plot widths of the district with a mix of retained and overclad facades and new-build.

It’s a typical Soho mixed-use jumble, in other words, and despite the larger floorplates behind the facades SODA, headed by Russell Potter and Laura Sanjuan, has gone to great trouble to maintain the street appearance of historic narrow plot widths – generally around 15 feet – where buildings of different ages and materials rub along. In pursuit of this variety they have used eight different types of brick in different colours and textures, some glazed, some perforated as a screen around a retained 1960s building. The Soho grain is respected.

Unusually these days, the architect is also responsible for the interiors, even the graphics. Indeed, the contract was traditional rather than the now ubiquitous design-and-build.  Naturally there are plenty of theatre-specific technicalities to deal with, hence the presence of theatre specialist Charcoalblue in the consultants’ mix.

Your progress from street to auditorium is designed to make the most of the limited space available. You enter a little foyer in a new building (the previous one was a brothel, says Potter matter-of-factly) on the north-eastern corner of Walker’s Court. From there you climb a stair or take a lift, and cross the alley in a glass bridge giving views north and south across Soho and with solar shading provided by a panel of real lace sandwiched in the ceiling glass. This is a reference to the net curtains of the various, ah, leisure establishments for which the area was and still is known.

You arrive in a restaurant and bar space occupying most of the first floor of this side of the court. Materials and colours refer to the nighclub vibe of the old place – reds, pinks and golds plus marble and dark-stained timber. Up another stair, this time a hanging steel one (or a second lift) to the second floor where you can finally cross a foyer to the ‘stalls’ level of the theatre. One level further brings you to the gallery level.

It’s amazing they’ve been able to cram it all in, really: this traditional necessity, making use of every inch of space, contributes to a hugger-mugger feel that is very Soho. Technically speaking the revolving auditorium is no mean feat – it can rotate 360° at stalls level and 270° in either direction at balcony level, while maintaining all the power and data connections. Why the need to rotate at all, you might ask?  Seven possible different staging configurations allow maximum flexibility of use, essentially.

It can’t move while occupied by people (or rather, it can but that would require a level of insurance normally associated with fairground rides, so that’s out) but since it only takes around three minutes to do, it can be done between acts of a play, for instance. The seating is clever, consisting of removable leather bucket seats with tip-up squabs that can be stacked horizontally like supermarket trolleys. It was developed by SODA with seating specialist Race, and can be arranged around the circular stage on both levels, or as raked conference-style seating on the stage itself.

This pocket theatre lacks any kind of flytower, back or side stages – there is, however, theatre storage and an electrical control room as well as offices and dressing rooms on the fourth (top) floor, and a reasonably large double-height rehearsal space on the second floor. Toilets are on the first (restaurant) floor, which links via an existing bridge across the southern end of the court to the existing ‘the Box’ cabaret early-hours nightclub. Below that is the next phase of the project, the revived and previously somewhat fighty Madame JoJo’s basement club. That has been excavated down so as to be more spacious than it was originally.

Above the clubs on this eastern side of the court are offices, culminating in a roof terrace: the easternmost part of the block contains three apartments on the upper floors while the ground floor is bookended by retail units either side of three entrances; to the offices, residential, and nightclub. 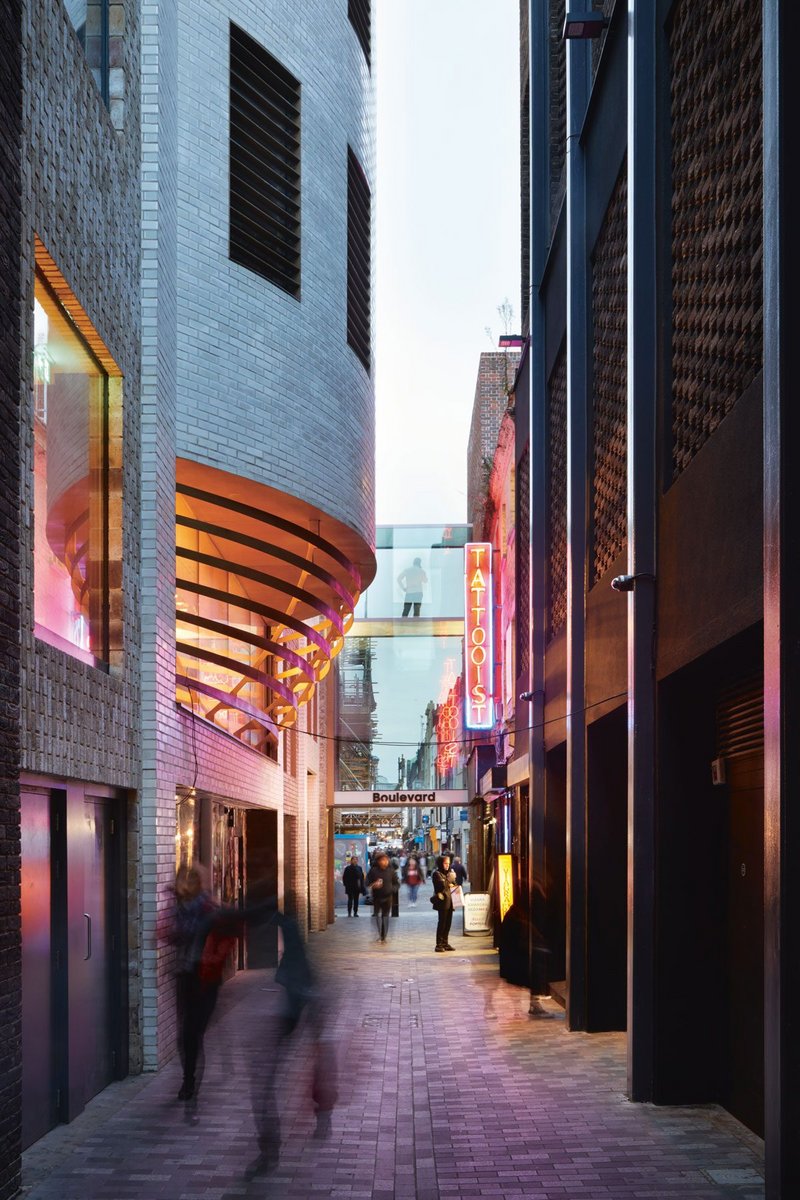 Looking up at the double-deck glass bridge with its lace interlayer.

The plans are very complex as this description makes obvious, and moreover during the course of the project have changed more than once: originally there was not going to be a theatre at all, for instance, let alone an ambitious revolving one.  The end result is totally fascinating. There is plenty of conventional redevelopment going on in Soho but this is assuredly not it. It harks back to an earlier age of the night-time economy while, technically at least, looking forward to the next. And when I dropped in on a rehearsal for the opening production, the musical Ghost Quartet – lights down, the whole theatre team in full attendance – it felt right. Intimate, involving. Actors and audience sharing the same confined space.  It’s a good start.  I feel the elusive spirit of Old Soho should be OK with this.