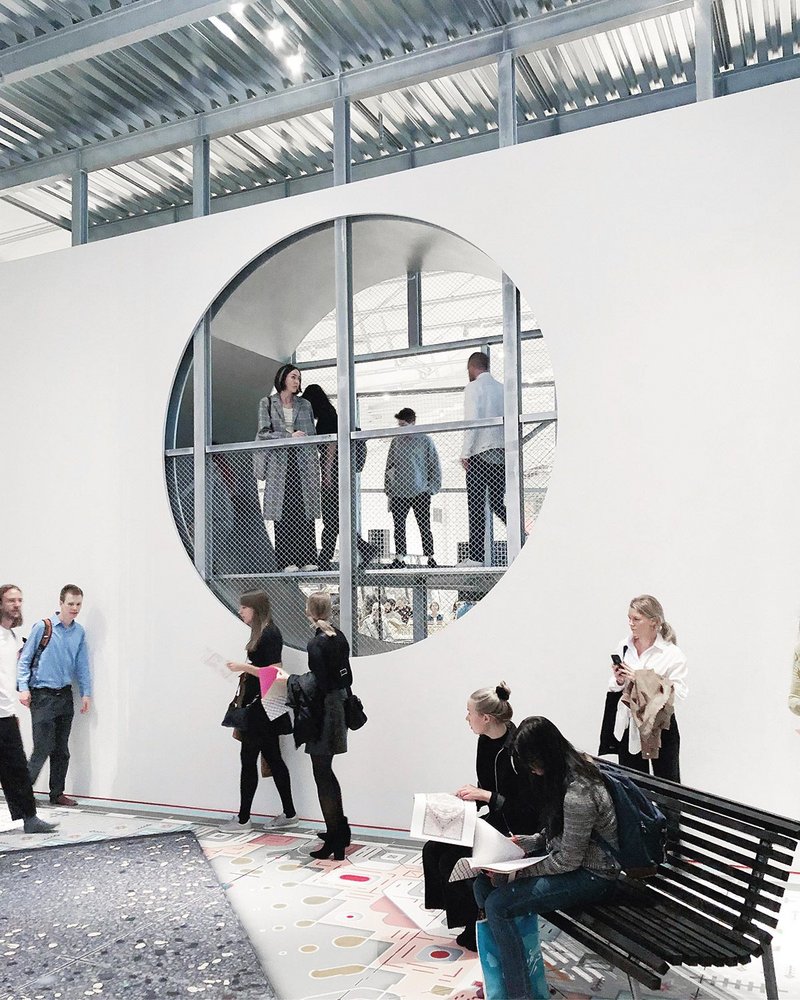 Inside the gallery. At the top that Boxen’s roof sits proud of the wall allowing natural light into the first floor. Credit: Johan Dehlin

This is a building as object, one that shows its structure and joints, from columns to nuts and bolts. Boxen is a new studio gallery at ArkDes, the Swedish Centre for Architecture and Design in Stockholm. The insertion, by young Swedish practice Dehlin Brattgård Arkitekter, deals with problems of scale, the disjuncture between ArkDes’ large 19th century military exercise hall and modestly sized displays.

The ramp of the main circulation running round the gallery is clearly visible, but Boxen doesn’t touch the walls. The heritage status of the hall won’t allow that. And it only gingerly uses the existing foundations; it is constructed as a bridge between them. It has to be a complete box, corrugated steel roof and birch-faced ply walls to stiffen the galvanised steel frame. Enclosed in mesh, the ramp is a space to be inside as well as to look out of.

Architect Johan Dehlin likens this exploration of steel to his earlier work as a project architect with 6A on Juergen Teller’s Stirling-shortlist Photography Studio where concrete was the object of study. And perhaps to the practice’s exploration of wood in a floating Riddarfjärden baths in Stockholm. Steel provided a system of dimensions and joints to work within, a framework to explore. Though there are some tricks – behind the mesh walls is silver-painted ply masquerading as metal.

Exhibitions are condensed in Boxen’s white box galleries. Larger exhibits in the hall can peered at from the ramp. At one end you can see between the two through a grand oculus sliced through the box, just missing a hidden internal stair. This bold gesture ‘disregards the structure’ say Dehlin and partner Johannes Brattgård, before admitting the painstaking work of ensuring the ramp met it at the right level and that head heights were right.

The architects’ game with movement is taken on by small children running, adults exploring, wheelchair users ascending the ramp. It is coming back to life since reopening from lockdown at the start of June.