When Bristol Old Vic decided it needed a serious reconfiguration, who to ask but Haworth Tompkins? Dramatic effect was a key element in the rewrite 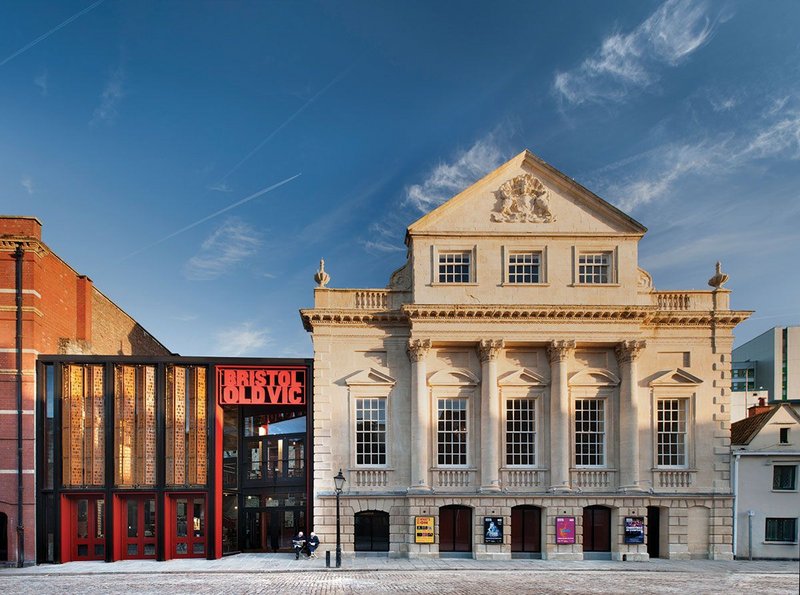 The facade and graphics on the front of the new foyer speak a very different language to the 1970s brick it replaced. Credit: Philip Vile

As an experienced theatre architect, ­Steve Tompkins’ reach is spreading around the world. We meet in my home city Bristol. Tompkins knows Bristol well, this year completing its Old Vic theatre and working here on his first postgraduate job three decades ago. But the conversation immediately jumps to Harvard and Malmo.

Tompkins and his team, including long standing partner Roger Watts, are exporting their home-grown theatre expertise to the US and Scandinavia. ‘There is no longer a default theatre audience’, Tompkins explains as he describes the commercial tensions operating contemporary theatres, and how they are becoming universal. Which prompts the question: how can architects help theatre directors run successful venues that appeal to increasingly diverse audiences, without reverting to generic architectural solutions and generic theatrical productions?

The answer lies in part in the ability to harness the creative forces that exist layer upon layer within theatre organisations, and to find a role within this complex cast of characters for the theatre architect.

‘Facing up to dilemmas together’ and ‘sharing the definition of the problem’ are two dynamics that Tompkins identifies as central to the development of successful creative fusion. Bristol Old Vic artistic director Tom Morris and chief executive Emma ­Stenning, who drove the project to completion, feel the same way.

Tompkins and I meet almost exactly three years since we were last in this building together, when I organised a lecture to celebrate Haworth Tompkins’ Stirling Prize winning Everyman Theatre in Liverpool. Morris took to the stage to set the scene with trademark presence and enthusiasm.

‘If anyone is building a theatre anywhere in the world, Steve Tompkins will be on the list of the architects they want to talk to,’ said Morris, quoting world renowned director and producer Stephen Daldry. He then added his own words introducing Tompkins as ‘Probably the most celebrated expert theatre architect in the world’. By this time the pair had already been working together for three years on the transformation of Bristol Old Vic – another much-admired character of international significance.

Bristol Old Vic is the oldest continuously working theatre in the English-speaking world, completed in 1766. Originally unlicensed, accordingly set back from the street frontage and accessed through a narrow alley and deep-set but daylit courtyard, the auditorium has survived largely intact.  Over the years, however, successive alterations to the street frontage culminated in 1972 with a new foyer and studio theatre by Peter Moro, whose scheme incorporated the neighbouring historic Coopers’ Hall as main entrance and circulation space. This brought major problems in relation to access, identity and revenue. It separated the audience in an incongruous way, with the route to the ‘cheap seats’ being via the grandeur of Cooper’s Hall, while premium ticket holders seeking the stalls had to navigate changes in level and series of circuitous, cramped and dark foyers. Moro’s carving up of Coopers’ Hall also meant that it could no longer fulfil its historic purpose as a public room for the city.

Radical change was needed. The first stab was renovation of the theatre and its back of house spaces by ex-Moro architect Andrzej Blonski. Then in 2012, Haworth Tompkins won a competition to address access, identity and revenue with a scheme that proposed replacing the 1972 foyer and studio with a more welcoming and legible foyer, a new studio theatre in the lower half  of  Coopers’ Hall and a reinstated grand public room as originally located on its upper level.

Tompkins and his team built on the acts of provisional intervention, seen in their work on temporary projects for the National and Almeida Theatres with The Shed and installations at King’s Cross and Gainsborough Studios. Recalling the intricate re-stitching at London’s Young Vic and The Egg in Bath, they started by establishing what was the minimum they could do to unlock the hemmed in and suffocated Bristol’s Old Vic.

This involved removing many layers of fabric, including the mostly 1970s brickwork, blockwork, concrete and plasterboard. When the original 1760s fabric was finally revealed, a number of existing openings were reframed with diamond cut concrete headers, while three new apertures were formed with their own crisp new lintels. Together they combine to form a relaxed composition of fenestration that enlivens the ritual of arrival and departure for audiences. To each side, as counterpoints to this masonry backdrop, two steel stairs crank as they rise to provide access and pause points that add further animation. Illuminated by a south facing rooflight that stretches between them, these proscenium-like structures frame the space and re-enact the immediacy of entry that the historic courtyard would once have given.

With entry to the theatre consolidated into one smaller space, and the inefficient and prolonged ascent via Cooper’s Hall ­eliminated, this once grand space could be reinstated to its former glory. As it stands, while impressive in scale and proportion, with neutral decoration and furniture the room lacks the vibrant identity that exists in other key spaces. But, as dictated by operational advisors, this is required for the broad range of income-generating events that it now hosts. It has apparently had a transformational impact on the business plan, providing significant new income and the perfect backdrop to weddings and conferences alike. And beneath this, where visitors originally entered, a new studio theatre has been created in the carcass of the historic barrel store, providing a space of much greater distinction and quality, lit when permitted with natural light and ventilated with pleasing and comfortable low velocity air that has been cooled by passing through the labyrinth of concrete walls that sit below the new foyer and has been engineered by Max Fordham.

The scene was set for Act 3, with the large original courtyard liberated to provide a new type of theatre foyer. Described by Tompkins as a non-building, this new space is screened and sheltered by timber structures on three sides and above. To the south, a new three bay entrance screen opens onto the street, alongside an inflection that mimics the geometry of the theatre to form a recessed entrance. To the west, on axis as visitors turn and enter through the protected lobby, is a double height acoustic screen.

Clad with oak laths that mask the less significant party wall and bend to conceal a new commercial kitchen, this element pulls back from the facade to reveal a retained chimney stack from the original terrace that would have been contemporary with the 18th century theatre. And to the east, above and behind you on entry, is a three stage open structure and ­jettied ­balcony that forms an armature between new and old, containing lobby and box office on the ground floor, interval bar on first floor (including a second delightful balcony that opens above the main entrance) and a roof terrace for Morris’ attic office, from where he can capture discreet views of the theatre’s much enlivened daily comings and goings.

Above all of this sits the most conspicuous intervention, with Momentum’s engineered diagrid roof amplifying the geometric complexities of the site that elsewhere have been played down. Beneath this sits a new bar and seating area, alongside a generous raised dais with removable metalwork, that can be transformed into a top lit performance stage framed by those proscenium-like stairs and masonry backdrop.

While other notable reviews have likened this space to a city square, due to its undeniable impact on how theatre and street engage, conversation with Tompkins reveals a stronger analogy between this space and the theatre it serves. With expertise and wit, Tompkins and his team have done two things. While addressing access, identity and revenue, they have opened up the site and, in the foyer, given the Old Vic a completely new contemporary performance space, complete with stage, backdrop, stalls, boxes, circles and decorated timber that echo the delights of this venue’s Georgian set piece. Open from eight until late, layer upon layer of activity now plays out in a foyer theatre where actors, staff, diners, drinkers, laptop drivers, musicians, and business meetings co-exist for 16 hours a day. And of course, it won’t be long until rehearsed theatre productions will take place here too.

Deserving of praise on its own terms, but perhaps more comprehensively significant as a hybrid of many other Haworth Tompkins projects, Bristol Old Vic has been radically transformed. Modest throughout, Tompkins prefers to focus on the people and the place, and if pushed describes a non-precious approach to architecture that – as with set design – leaves capacity for spaces to continually change. So it is little surprise that the client, Tom Morris, is extremely pleased.

‘Steve is imaginative in an unusual and surprising way,’ he enthuses. ‘When he designed these spaces he was not only imagining what the thing might look like; he was imagining a space that would facilitate the imaginations of the people who were going to be occupying and using it.

‘This may be why and how his buildings are so successful – they arrest your eye, they captivate you when you see them, and somehow they leave space for you to imagine stuff inside them. And that is in my view what ­creates perfect theatre architecture.’

Rob Gregory is an associate at Purcell

York puts on an encore