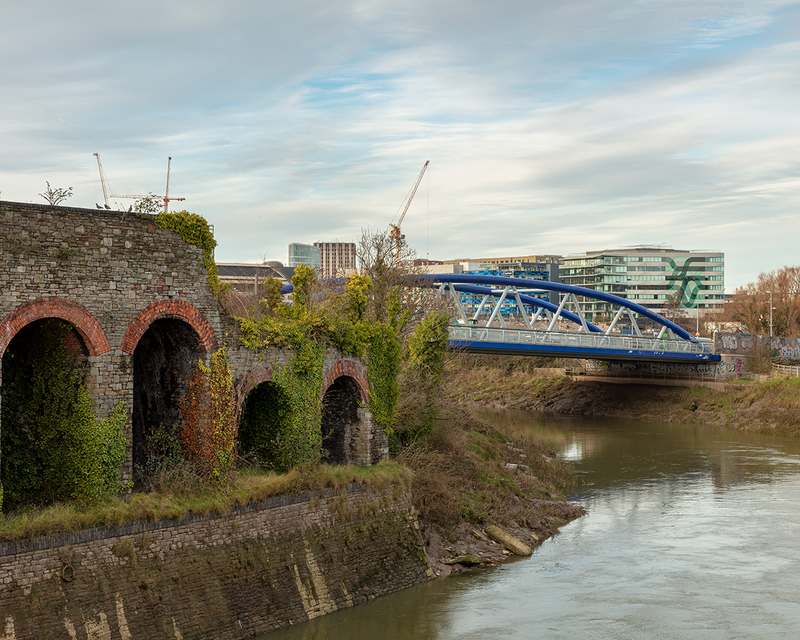 Arriving into Bristol Temple Meads by train, you are landed in the centre of Temple Quarter Enterprise Zone. You can see it from the train coming in but the station funnels you out between the long arms of its buildings and pushes you towards the mile-long walk into the city centre. You have to backtrack to see around and behind the station – the fractured complex of roads, dated offices, historic walls and industrial sheds, carved into islands by the curves of the river Avon and a network of canal and old floating harbour that make up the 100ha Temple Quarter Enterprise Zone.

The enterprise zone has had a special status since 2012 and was given added weight by the setting up of the West of England Combined Authority in 2016 with a £500 million Economic Development Fund. Homes England is on board and Network Rail too. Bristol mayor Marvin Rees describes it as ‘massively significant’. It has had great hopes attached to it, the most high profile being the £90 million Bristol Arena. Populous and Feilden Clegg Bradley Studios (FCBS) worked on its design before it was cancelled in favour of a developer-led site, north of the city. The bridges installed for the arena are a testament to the failed hope. But now there are now fresh moves, most notably Bristol University’s new Temple Quarter Enterprise Campus. And in March a new development framework comes before the city authorities to be embedded into the Local Plan running to 2035.

I dodge the gothic castellations of the station’s embrace and slip out though a side entrance. Here, over the last 25 years, six-to-eight-storey blocks have gathered, rather lumpishly around Temple Quay, housing legal firms and public bodies. They are topped by Glenn Howells Architects’ 13-storey Eye – a block of glittery apartments completed in 2009. The showy Valentine Bridge and Mead bridge over to Glass Wharf take you over the water; nice moments in a rather dull walk from the station. Temple Quay is familiar territory – in architecture, masterplan, development model – recognisable from early London Docklands development, Dublin Docklands and London’s Paddington Basin. 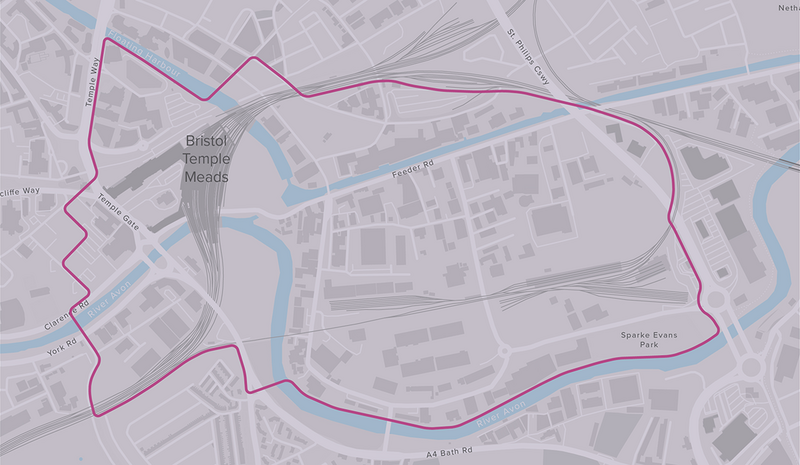 The bulk of the enterprise quarter is reached through a low, dank tunnel under the railway lines, but in the 1800s it was a busy section of the port. The wealth it brought into the city – including the empire’s slave trade economy – is embedded in the massive rubble walls along Silverthorne Lane from the St Vincent’s Iron Works and Bristol Gas Works, where coal was stored before being baked to release gas. Now empty sales forecourts front these buildings, with light industrial sheds tacked on to the old walls, topped with razor wire. Here is imagined a development larger than London’s King’s Cross Central: Bristol University’s campus will give it the first visible buildings of a new generation.

As the city consults on introducing a conservation area, the most visible landmarks of the industrial uses, albeit modern ones, the gasometers, have recently been levelled as work starts. There are plans for 370 houses and a 1,600-place new academy (currently called in by the secretary of state). Bristol University, with AHMM, has been consulting on its plans, including an incubator unit for the as-yet-unlisted coal sheds and around 700 student residences. But this is phase 2 for the university’s Temple Enterprise Quarter, earmarked for sometime in the future.

Phase 1 is sandwiched between the water of Totterdown Basin and Temple Meads station, scheduled for completion in autumn 2023. The person driving the build is Barra Mac Ruairí, the university’s chief property officer and one-time council strategic director of place. Under the short mayoralty of architect George Ferguson, Mac Ruairí purchased  the long-derelict postal sorting office on this site for the council and stripped it back to its frame. He could see then that the site would ‘need real patient capital’.

It hasn’t got any easier, but he believes the university has the right, long-term ambitions for the job. ‘You can’t underestimate the challenges,’ he says. The sorting office has now been demolished but was hugely solid with 2m-thick concrete into the basement which is not shifting (100 piles will be core drilled into it for the foundations). Ground contamination seemed a given since there was no wall to the historic floating harbour. Between this and the tidal River Avon just south, the water table necessitates raising the site by a metre. In addition, service access to the station had to be maintained. ‘It has really taxed me,’ Mac Ruairí admits.

Despite that, the masterplan, by FCBS, gives an effortless flow to the public spaces. It was given a boost by Network Rail plans to open new station entrances (still awaiting funding agreements), eventually opening up a direct route from and through the station and city centre and into the new campus. The centrepiece is FCBS’s mega 39,017m2 academic building with a 6m-high ground floor, Bristol Rooms, which will welcome the public for events and 'partnership working'. Above will be collaboration spaces with a focus on innovation and entrepreneurship, management, digital and quantum engineering and their partners in hack spaces, labs and research facilities. For an institution largely based in villas in the rather precious Clifton, above Bristol, this is a big move.

Making it a public place has been an essential part of the message – from a new green edge to Totterdown Basin to the squares that will face each other over a new bridge. ‘We are conscious to create a porous campus; open but dense,’ says Mac Ruairí. Winning over the public – or at least planners – has also meant reducing the height of some of AHMM’s postgraduate student housing on the adjoining site of Temple Island, although it still ranges from 12 to 21 storeys.

The height of buildings on Temple Island taps into Bristol’s ongoing debate about height, fuelled by the visuals for ZHA’s towers for 500 homes next door for L&G (with a conference centre and hotel as a possible phase 2). Elsewhere the city is about to get its tallest building yet: Chapman Taylor’s 26-storey Castle Park View. Former mayor Ferguson fears the tall buildings are taking the city in the wrong direction. On Temple Island he despairs of the ‘piling’ up of the housing. ‘This is not the way we should be housing students,’ he says. For current mayor, Rees, housing is one of Bristol’s biggest issues. Building enough of it, close in to the city, is part of addressing Bristol’s equality, and sustainability for the whole city. The opportunity of 10,000 new homes in Temple Quarter is a gift. ‘It’s in active travel distance and yes, higher density in the middle of the city,’ he says.

There are still areas of great opportunity in Temple Quarter, such as the southern section, St Philip’s Marsh, currently home to cement batching, car dealerships, scrapyards and a fruit wholesale market – though Rees sounds a note of caution about the need to retain jobs and not just white collar ones. It will also need flood resilient-infrastructure to underpin what the council hopes will be a ‘series of sustainable mixed-used neighbourhoods’.

And right next door is Redcliffe with its 60s housing blocks clustered around the landmark St Mary Redcliffe church, lately the subject of great community push for a neighbourhood plans. Hall McKnight has designed  a £12-15 million scheme for the church with local community spaces, which has still to receive planning. And there is Grimshaw’s Engine Shed 2, which takes on the very successful model of the existing supported work, innovation and incubation space into an extended George and Railway Hotel – between Temple Quay and Redcliffe. Developer Skanska is waiting to push the button, or not.

There are huge sums involved – £32 million has been quoted on council remediation of land at Temple Island, L&G is reportedly investing £240 million and the cost of the campus is £300 million. It is hard to see how the values and revenues these rely on will be sustained in a coronavirus (and Brexit) recession, though they are planning for the long term into 2041. Elsewhere in the city, shelved development plans could perhaps be hidden but here everything is on show to visitors. At the moment two new bridges span the muddy tidal reaches of the Avon leading to nowhere, gathering graffiti, and waiting for the development to finally come. It needs to happen says Rees. ‘It adds to the city’s reputation as a place where you can get stuff done.’•

See Bristol Mayor Marvin Rees talking about Temple Quarter and the city with Eleanor Young as part of the RIBA’s People Place Planet series here. And see Bristol brought to life by The Architects Underground's Way out West.