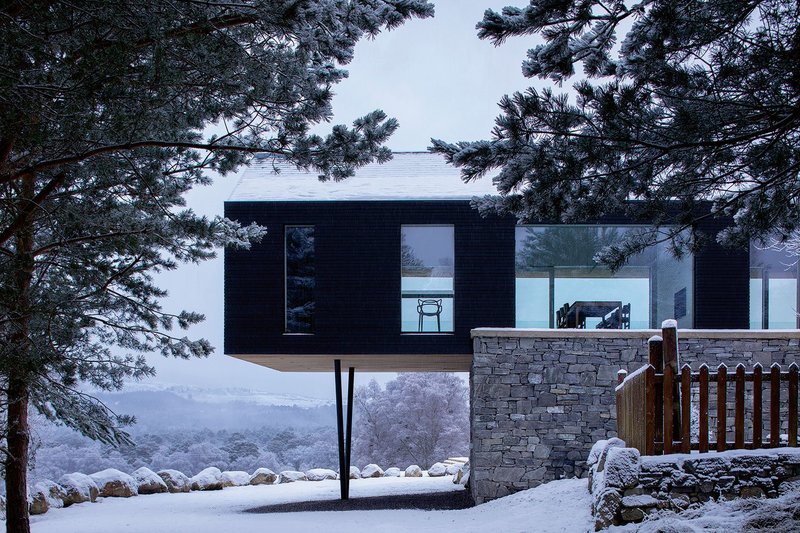 The new extension continues the ground floor of the original farmhouse over the sloping side onto a new plinth that ends with a cantilever. Credit: Dapple Photography

‘So much of what we do is landscape and weather driven,’ says Andrew Brown. He and wife and business partner Kate set up their eponymous practice in 2010 – the date will tell you that this was after the great recession following the financial crash. Before that, between them they had worked for Scottish practices including Rural Design on the Isle of Skye, Simpson and Brown, RMJM and Richard Murphy Architects in Edinburgh (profiled in RIBAJ April 2020).

This, then, was a rural, altitudinous fresh start for a lowland couple - Andrew is from Glasgow, Kate from Beverley in East Yorkshire. Their base at Strathdon on the eastern side of the Cairngorms is pretty remote, and explains their connection to weather and landscape. Last winter, Andrew says, the temperature hit 24º below zero at one point and they had a metre and a half of snow on their green studio roof. But as he says, it’s not the cold that matters so much as the wind, and that affects everything from levels of insulation and triple-glazing to structural engineering that pays great attention to wind loading and uplift.

Compared to where its architects live, the site of this house at Tullochgrue on the western side of the national park near the Aviemore ski slopes is relatively sheltered by Highlands standards; but the new building is still stoutly tied down and braced through its steel frame (with timber-frame wall infill). A rural retreat for a large multi-generation extended family, it is designed to be used all year round, sometimes as a work base: so it’s much more heavily occupied than an occasional bolthole. 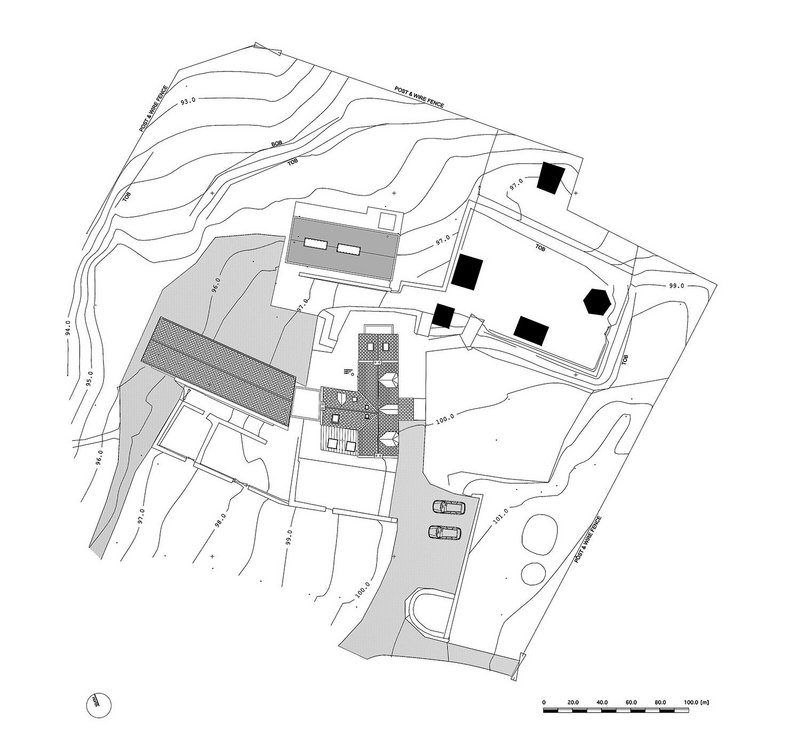 The design evolved as a single-storey extrusion angling away from an existing T-plan, 19th century, two-storey former farmhouse. This was in fair condition, so needed relatively light adaptation though it is lengthened slightly with a short added bay at its north end. The new extension is set well back from the old house, connected by a glazed link that has the benefit of acting as a passive solar collector in winter, warming the old building. A large glass pivot entrance door ventilates it in summer. Other than a wood-burning stove, the only heating comes from twin air-source heat pumps, working on a cascade system whereby one is sufficient when the house is only partly occupied, switching from one to the other to balance the usage. The house has mains electricity though water supply and drainage are (as is common in the area) off-grid. 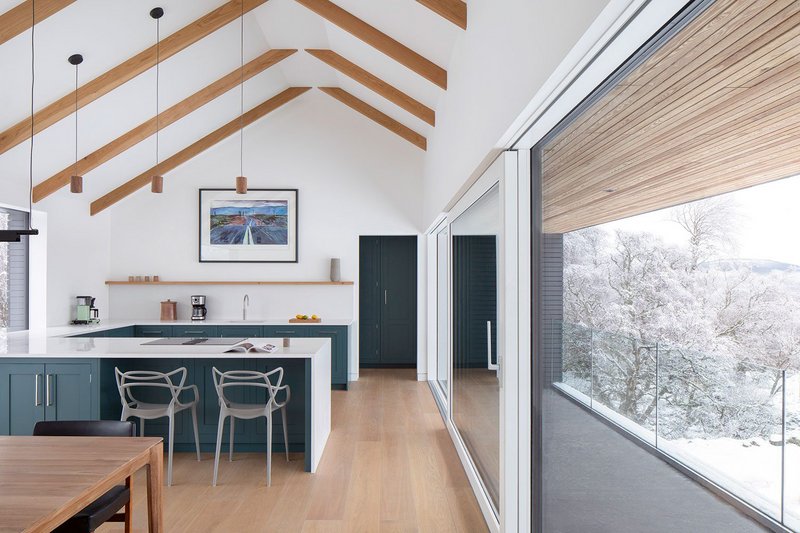 An enclosed balcony runs along the northern elevation of the new living block to capture the best views. Credit: Dapple Photography

There is nothing exceptional in the layout of this shoot-out – it contains a living room, kitchen-dining area, utility room and toilet. In contrast to the cellular nature of the old house, the new wing is spacious and light, providing large entertainment spaces rising to the underside of the roof pitch. Externally the topography provides the design stimulus. The land falls away quite sharply behind the old house, which was itself built on made-up ground. Down on the lower level and to one side was a dilapidated barn. The client’s original idea was somehow to connect the house to this and refurbish it. Instead, Brown and Brown proposed keeping the extension on the ground floor level of the old house – much better for less able-bodied family members over time - which in turn meant building a masonry plinth to put it on, clad in local stacked stone from the same (briefly reopened) local quarry that this farmstead originally used. Investigation revealed that the old house was, as Brown puts it, ‘standing on almost nothing’, with large voids in the banked-up ground beneath it. Consolidating that with civil engineering interlocking concrete blocks delayed the overall programme by around six months.

There was one other design consideration: the family’s prized Ford Falcon, a ‘compact’ early 1960s American car. That had to be able to negotiate the track round the end of the house and park under shelter. The solution to that little problem was to express the end of the new wing as a propped cantilever, with enough space either side of the V-angled steel columns for the car to drive past, or park. There are also a couple of ­garages and a utility/plantroom built into the plinth on the north side, accessible internally from upstairs via a rather fine steel and timber open-tread stair.

The propped cantilever/drivethrough recurs in other of Brown and Brown’s house designs but it’s not wholly generated by vehicle access: it’s also a way of reducing the bulk of the end of the building, not making the plinth over-dominant from below. Even so, in this one respect it recalls Corbusier’s Villa Savoye of 1928-31, the pilotis of which were spaced (and the ground floor shaped) to accommodate the angular Voisin C7 cars driven by both architect and client.

You might expect there to be a balcony, or at any rate a window, in the western end elevation, but no, it remains a solid wall clad like the rest of the building in black-painted Siberian larch. This is because the good views are to the north, looking across to the ski slopes of Aviemore. On this flank the new wing has a long balcony cut into it, beneath the oversailing slate roof. The soffits to balcony and cantilever are in the same larch, but with a clear weathering coating.

Balustrades inside and out are vertically-cantilevered laminated glass sheets with no handrail. In the main bedroom in the old house, a long horizontal window cut into the north gable end frames the same view.

The good views are to the north, looking across to the ski slopes of Aviemore

There is a large expanse of glazing on both sides, all triple-glazed, while the ­thickness of the window reveals inside and out is testament to the high level of insulation – way beyond regulations according to Brown, though they were not targeting any particular standard such as Passivhaus. The rigid insulation wraps right round, encasing the floorslab as well as walls and roof.

The architectural language inside continues the vernacular-modern theme: most exposed timber is left pale-natural, walls and ceilings white. Cupboards and cabinets are in dark greens and greys. Light is key, all daylight coming from the sides with no roof piercings.

The architect also designed a separate green-roofed timber games room/guest suite down below where the farm outbuildings used to be. Beyond those, it is the closer wooded landscape that you see and which the architect maintained by keeping the work site as small as it could in order to preserve the setting from damage. All in all it’s an accomplished piece of work, a fine place to be with a glass of good Speyside malt on a frosty day with the stove going. 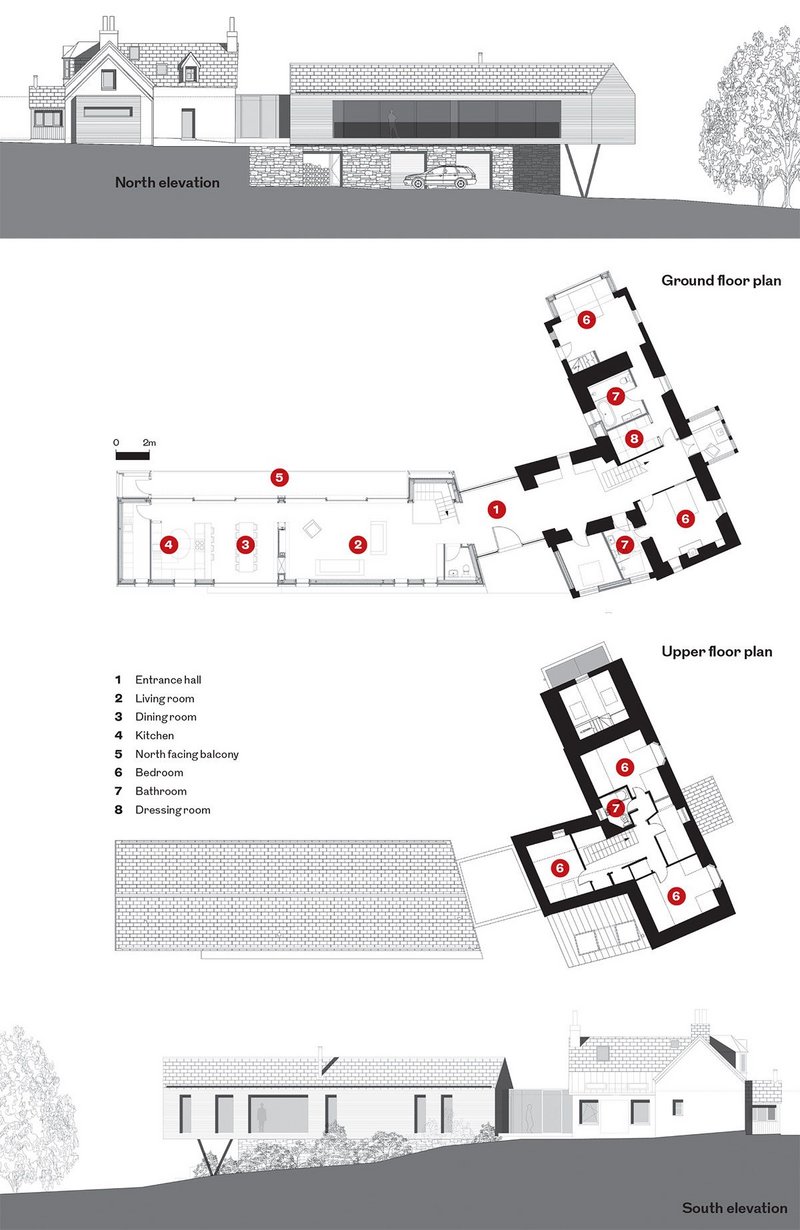