Casa Tiny has room to bloom 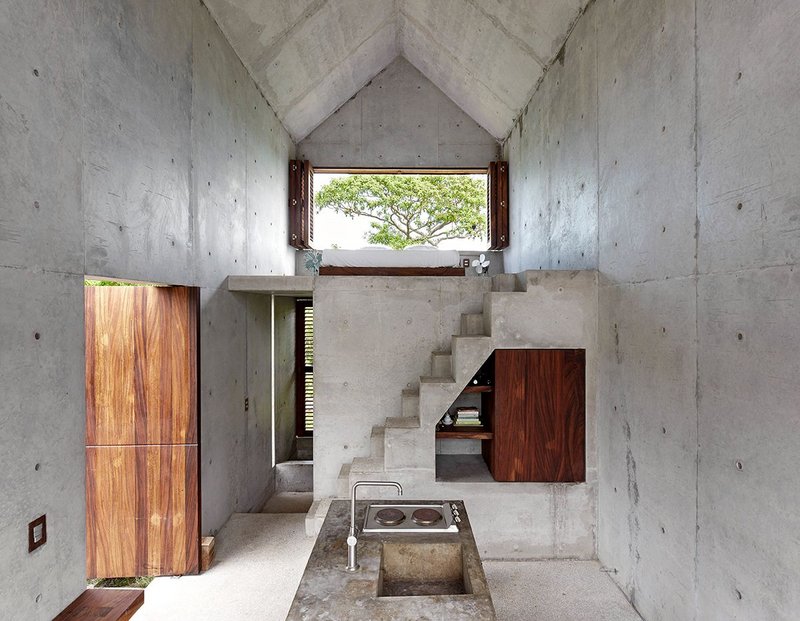 If there was ever a case for bringing back master architects and apprentices, this project would be it. Casa Tiny is not the work of an official apprentice but in many ways, that’s what its designer, young graduate Aranza de Arino, is. Located in the coastal outback of Mexico, Casa Tiny is sited within spitting distance of Tadao Ando’s Casa Wabi, a multi-disciplinary artists centre with residential accommodation for six artists (RIBAJ Dec 2015), and this little house and its ­designer are very much their seedling.

Casa Tiny is a 36m2 holiday house for weekend breaks and longer stays. It was commissioned by the brother of the founder  of Casa Wabi – a friend of Arino – for a small parcel of virgin land that was partitioned and allocated during the building of Ando’s project. A simple brief required a house that generates value in the land while bringing its inhabitants into close contact with nature. It had to be permanent but basic and contained.

Inspired by the writings of Henry David Thoreau and John Burroughs, and the Tiny House Movement in America, Arino set herself the objectives of conceiving the house in only two materials – concrete and parota timber, as Casa Wabi did – and making it ­archetypal.

Following the twists and turns of a narrow path, one discovers the house hidden amid thick jungle vegetation. In line with the north-south axis, between a magnificent tree and the sea, Casa Tiny is oriented towards the dominant winds and spectacular views of the hills and ever-changing landscape. The tall roof favours the flow of air currents, keeping the house cool under the sun of the Oaxacan coast; its gabled shape, a continuation of the concrete walls, alludes to the language of the Tiny House Movement, a way of living minimally and free from mortgages and other rat-runs.

Within the house, parota wood is used for the most touched surfaces – doors, windows, cupboard, shelves – and profits from the virtues of local craftsmanship and expertise. Concrete cast on site pursues a tectonic expression in the walls, roof, floor slabs, stairs and the structure of the furniture.

Built in 2015 and 200m from the beach, Casa Tiny calls for a life outdoors. In its boldest move, the house is open to the elements; its big glassless wooden windows allow activities to take place in direct communion with the nature and the stillness of the place. The long table, extending from inside to out, creates a space of coexistence in which cooking and eating breakfast, working and playing can all take place at the same time. By climbing the alternating-tread stairs, one encounters the mezzanine bedroom which is also open to the continuous space. Tucked away beneath is the shower room. Sand and vegetation will scatter inside with use, but that is one of the joys of the house. The building, terraces, pool and orchard – small islands in a sea of vegetation – compose the house as archipelago of objects in the landscape.

Originally conceived for a couple, the archipelago remains open to future expansions: one more terrace, a new bedroom for guests, a pizza oven. The only question the building prompts is where does one’s career flourish from here?