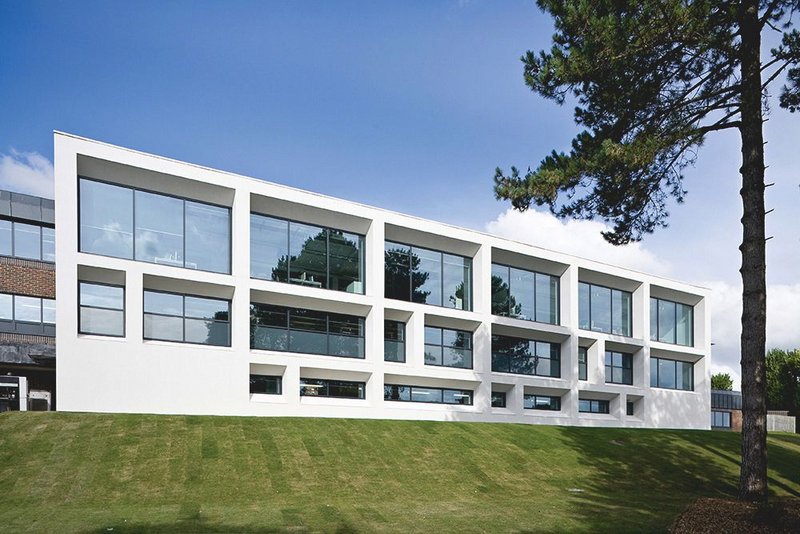 More than a reclad: RCKa extended the building to the edge of the slope, the deep reveals giving it a generous sense of articulation. Credit: Jakob Spriestersbach 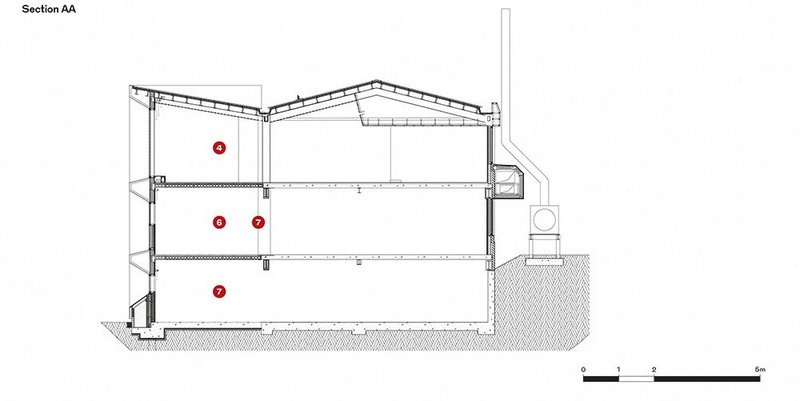 In a quiet corner of Hampshire lies a small fortress of money manufacturing. High fences and berms, a security hut and lockers for smart phones to be kept out of the site. This is the sort of security you might expect from De La Rue, which manufactures banknotes not only for the UK but for many countries worldwide. Its mill in Overton produces the security paper on which the notes are printed.

The team that has to keep De La Rue one step ahead of the counterfeiter is continually  innovating and testing, and has recently been assembled from little offices scattered all over this and other locations, in a smart new base at the front of the site. In its 1980s form this building was dour rather than welcoming; extended by 6m and cut into with deep reveals by RCKa, it lends a civilised modern air to the facility. The more solid plinth rising to increasingly open upper levels hints at the higher security research labs down below and more open offices looking out from above.

The relatively young practice of RCKa, formed in 2008, found its way onto the project through a combination of a background in research and development and contacts with director Russell Curtis’ old boss David Leon, who was initially engaged and brought RCKa in. Its previously completed TNG Youth and Community Centre in Lewisham, London, has won numerous plaudits, including an RIBA award. Curtis has his fingers in many pies, including working out ways to improve the fraught process of procurement.

But first, how to improve the complex process of testing and proving banknotes? These flat things have an architecture of their own: threads, holograms, cotton and polymer substrates, windows and raised prints. These features must be designed, developed and trialled – by immersion, cash points, aging, washing machines and irons. So in this building is a small test print set up, UV coating facilities, a huge lightbox, specialised measuring and testing equipment, the lab tables one might expect and a number of apparently incongruous domestic appliances – each with their own particular servicing requirements. The kit alone cost £3m. The building came in at £4m.

The 2,000m2 building has to work for its resident physicians, chemists and engineers by creating a calm, unruffled environment (literally – air is delivered by fabric duct to reduce air movement) and light, sociable write up spaces. This is helped by the linear south east extension which allows the low ceilings to flip up on the office floor, tricking the eye into seeing more space, and the removal of the suspended ceilings.

Visiting international dignitaries, who did not previously visit R&D’s scattered locations, are also now brought here on tours of the centre to what is a state-of-the art facility. The layout of the building was made more logical, and linked research more closely to the manufacturing site, by the removal of a ­spiral entrance stair to the south east facade and replacing it with an entrance at grade in the middle floors on the opposite facade. A small exhibition shows off some of the 951 patents De La Rue holds and is a good starting point for a visitor journey that takes in the generous circulation route around the labs. And so, in its small way, this high security ­facility is opening up Overton Mill.