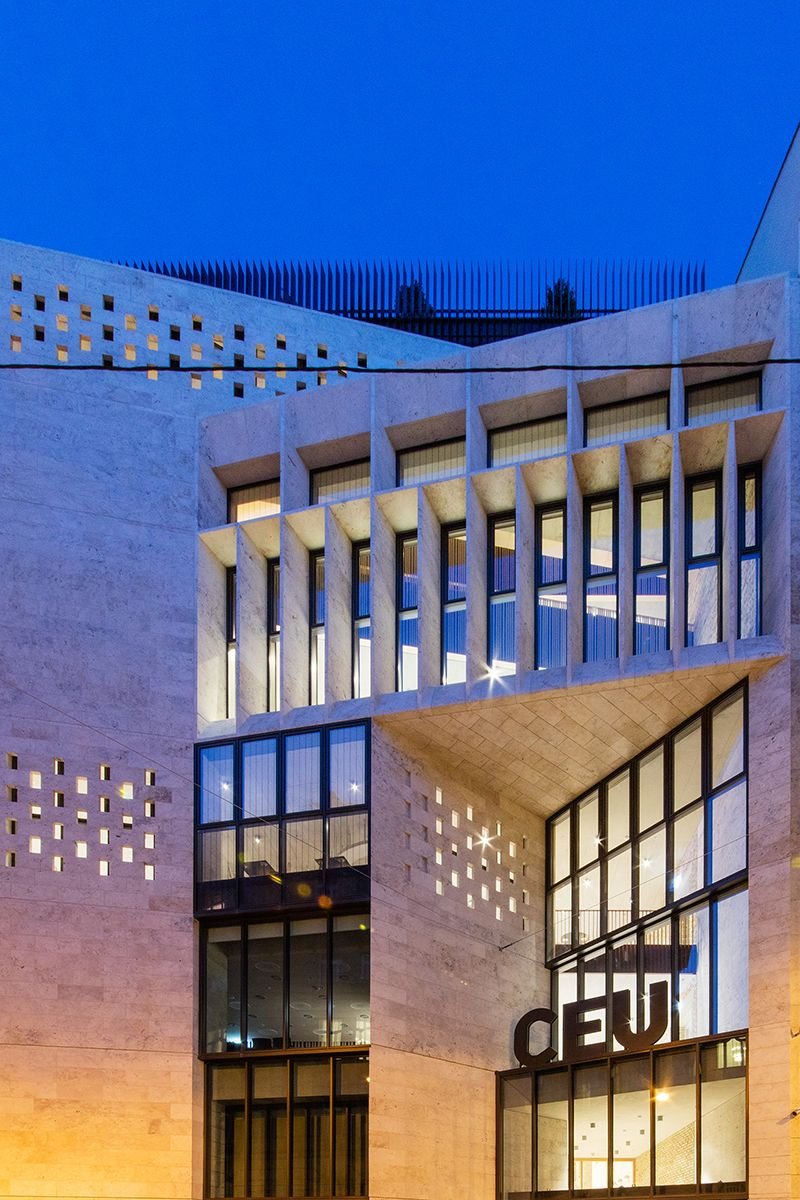 The skill of Sheila O’Donnell and John Tuomey is in performing a type of urban alchemy, creating architecture that emerges almost directly from a close reading of place and the local climate. ‘Maybe that’s all you have to do,’ says Tuomey. ‘Read the situation and present it back to itself.’

Budapest, bisected by the Danube, is famously two cities made one. Buda sits on the hilly west bank, with its historical castle and palace complex of the Hungarian kings, while Pest, on the opposite side, was built on the flat terrain of the great European plain that stretches all the way to the Urals. The core of the city was declared a Unesco World Heritage Site in 1987.

Budapest is the leading R&D and financial centre in central and eastern Europe. CEU was established there in 1991 by George Soros, the billionaire investor and political activist. A follower of the philosopher Karl Popper, who developed the concept of the open society, Soros is a controversial figure in Hungary, the land of his birth, where he is widely perceived as a thorn in the government’s side. Although he is routinely attacked in the government press for his liberal pro-democracy stance, the university has always been welcomed, perhaps partly because of the amount of high-quality tourism it attracts to Budapest.

CEU is a postgraduate institution specialising in economics and politics. Its president and rector is Michael Ignatieff, the Canadian author and former politician, who recently left Harvard to take up the post. Ignatieff says: ‘The core of CEU’s open society mission is how we can sustain freedom not just in central and eastern Europe, but worldwide. The only thing that a university can do to move the situation forward [lies in the fact] that it trains people who are aware of what knowledge is.’

Although CEU’s main aim is to play a pivotal role in educating the future elites of the region, its 1,450 students come from 110 different countries, and the faculty is strongly international too. Almost half the students are from the European Union, approximately 200 from the former Soviet Union and about 150 each from Asia and North America.

CEU began in a single house – 9 Nador Street – a neoclassical mansion built in 1826 for Count Antal Festetics at the corner of Nador and Zvinyi streets in Pest, two blocks from the Danube. The Széchenyi Chain Bridge and St Stephen’s Basillica are nearby. Over the years, three adjoining buildings on Nador – nos. 11, 13 and 15 – and one on the opposite side of the block, on October Street, were acquired and a large extension was built at the centre of the block.

But there was no campus atmosphere. The layout was higgledy-piggledy and the houses isolated, each having its own entrance. The competition brief called for connections to be made between the buildings and the 20 different floor levels they contained.

Central Budapest is a city of courtyards. The urban blocks are big and densely built. The plots are deep, with multiple courtyards cut out for access, light and air. Narrow passageways lead to the interior. Although many of the courtyards have elaborate external access balconies, others are just light wells, without activity. This was the case at CEU.

O’Donnell + Tuomey’s winning design for the 30,000m2 campus took these characteristics of Budapest and offered them back to the university. They connected the plots by breaking through party walls and turning the courtyards – nine in all, each one different – into a legible sequence. The local climate is extreme, ranging from -20°C in winter to +40°C in summer, so each courtyard gets a pointy, snow-shedding roof light.

The courtyards are the campus – the university’s circulation system and its social spaces. ‘The connected campus’ is a metaphor the architects like to use about CEU: an open campus for an open society. A secluded roof garden – the largest in Budapest – provides the only outdoor amenity and offers spectacular views of the castle on Buda Hill, the parliament building, the basilica and the Danube.

The presumption in the competition was that the main entrance to CEU would remain on the corner of Nador and Zvinyi, but the architects seized the opportunity to create a new face for the institution by connecting CEU to the Danube. The most northerly and least distinguished of the university’s properties, 15 Nador, is on axis with Vigyázó Ferenc Street, which leads to the river. This has become the new front door, where the university opens to the city, with other entrances at the corner and on October Street at the other side of the block.

As CEU must continue functioning during construction, the development was split into three phases, with the recently completed first phase focussed on 13 and 15 Nador. Classrooms and 300 faculty offices are located in the retained buildings. The new Nador 15 houses an auditorium and library, which, because of their size, could not be slotted into the existing buildings.  The auditorium, which can be subdivided, occupies the basement and ground floor, beside the entrance lobby. It has a large street window that can be blacked out by operable timber shutters.

The library is above the auditorium, spread across five floors, each with a different atmosphere and all with a view of the Danube. Librarians – including the cataloguers, who normally work out of sight – have offices on every floor to ensure security. And silence is golden: extra-thick double glazing, baffled acoustic wall panels and a 6mm wool carpet create an atmosphere akin to a recording studio. The library roof light provides a lively form on the river axis.

The intention is to retain and expose as much of the existing character of the old buildings as possible. This has backfired in a few locations in Nador 13, notably where a spiral staircase was removed to improve permeability at ground level: the scar left behind is ugly rather than characterful. A wedge-shaped roof light over the 13 Nador courtyard – with its oxblood flying staircases that connect faculty offices to classrooms – prevents noise from the social hub below from disturbing the offices above and outside the atrium, but, in what seems like an afterthought, the roof light is awkwardly propped at the midpoint.

Budapest’s traditional facades are heavily modelled. Today, projections and overhangs are forbidden in the heritage site, so O’Donnell + Tuomey eroded the new facade, folding it around the centre line of the axis with the Danube. They took inspiration from two buildings in Budapest by the architect Béla Lajta – the Art Nouveau Rózsavölgyi music store and the Art Deco Parisiana theatre – when composing the facade. Lutyens' Castle Drogo became a visual reference for the structural stone mullions of the library window. The stone is Sóskút, a soft local limestone used on all public buildings, 8cm thick.

The second phase of construction is about to get under way. In spite of the impressive start, CEU remains a cul-de-sac, even though all the buildings on Nador are now interlinked. Not until the building on October Street is redeveloped, completing a pedestrian route through the block, will CEU become a truly connected campus open to the city.