An old gasworks in your back garden might not sound very desirable, but Chris Dyson Architects has made a silk purse from a sow's ear 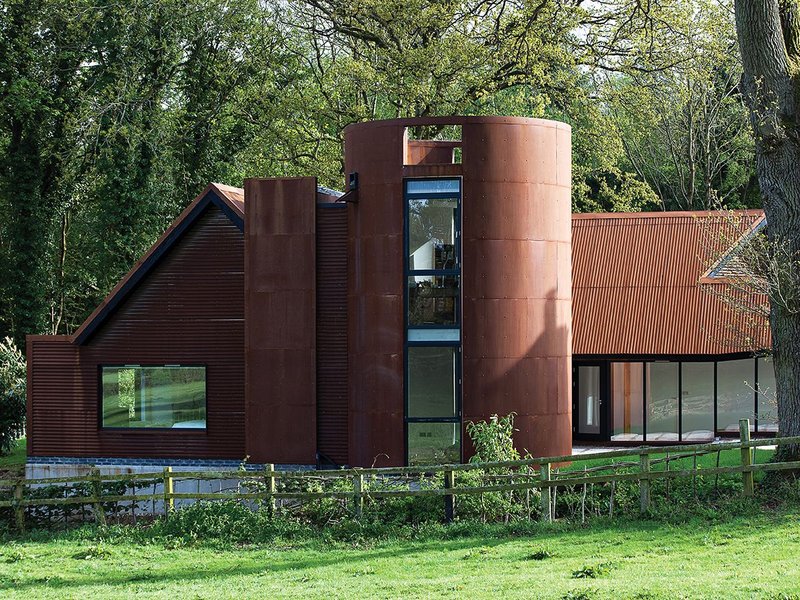 Looking out to nothing but fields, the open side of the courtyard and a two storey drum suffer no privations of privacy. Credit: Peter Landers

Before my visit, the only orange I had associated with the Cotswolds was the flashing curls of Rebekah Brooks’ hair, lording it over the media and political powerhouse of the Chipping Norton set; a hot-headed anomaly in a landscape of rolling green and honey-coloured stone. But down the road from ugly tales of tabloid hacking, more balancing literary forces to come into play. Perhaps it was Laurie Lee’s idyllic upbringing in the village of Slad and his vivid memoir ‘Cider with Rosie’ resonating with writers, but something persuaded award-winning author Jeanette Winterson to split her time between her home in London’s Spitalfields and this scenic Cotswold idyll.

It turns out the stone cottage she bought, with land and coppice on the village’s edge, came with its own gasworks. They weren’t for her property, but for the nearby manor. Here, in bygone days, some poor servant might be sweatily shovelling lime and coke in a hot furnace to fuse calcium carbide, with water a core ingredient for acetylene, which was created here then piped along to the owners of the stately pile beyond the trees, to light their ruddy complexions with its gas.

The Spitalfields connection accounts for the fact that Princelet Street firm Chris Dyson Architects was commissioned by Winterson to submit a proposal to Cotswold planners to turn the 1877 gasworks into a writer’s retreat, with a number of study bedrooms extending out in an L-shape at the back of the house to form a small monastic cloister, each window looking out pensively to the woods and hills beyond. The nimby-free surprise of getting permission to carry out this proposal in an Area of Outstanding Natural Beauty was only matched by the nature of the cladding material – corrugated steel with Corten coating – rendering the building an almost iridescent orange. When Winterson decided to sell the site on with planning to a couple of East End friends, she wasn’t baulking at the radical cladding, but was perhaps moved by the dawning realisation she might be more misanthropic than she had first thought: the writer’s commune was ditched in favour of a luxurious timber-framed three-bed extension. The rusty-orange cladding however, in all its shocking splendour, remained.

Dyson’s planning argument that his corrugated sheeting was part of the formal language of this agrarian community was plainly bang on the button. To drive the point home, the client points out over the fields to a large rusty green barn apparently owned by a member of a stadium rock band, and used for storing his collection of cars; and though it pops up unabashedly over the ears of wheat, you probably wouldn’t look at it twice. In fact, the firm was so convinced that the industrial aesthetic was key to the design, it even felt vindicated in referencing its underground acetylene tank in plan and belatedly proposing one above ground, appended to the extension’s end as the client’s TV room and study. The bold, two-storey drum went ahead after a smooth re-submission and a year after completion, the client tells me, some bemused villagers think it’s a mini gasometer – and even then aren’t bothered.

As for the interior, the contemplative spirit Winterson engendered for her fictional commune remains in palimpsest. Fully-glazed cloister circulation around the courtyard that would have fed the writers’ ‘cells’ now leads to generous white-painted rooms with views more indulgent than monastic, out to a nearby copse or rolling landscape; big picture windows framing texturally distinct yet similarly verdant experiences of nature. On a hot, hazy English July afternoon it is almost too much for the senses: the sound of cuckoos somewhere in the blue, the blue against the green; and against the green, the orange.