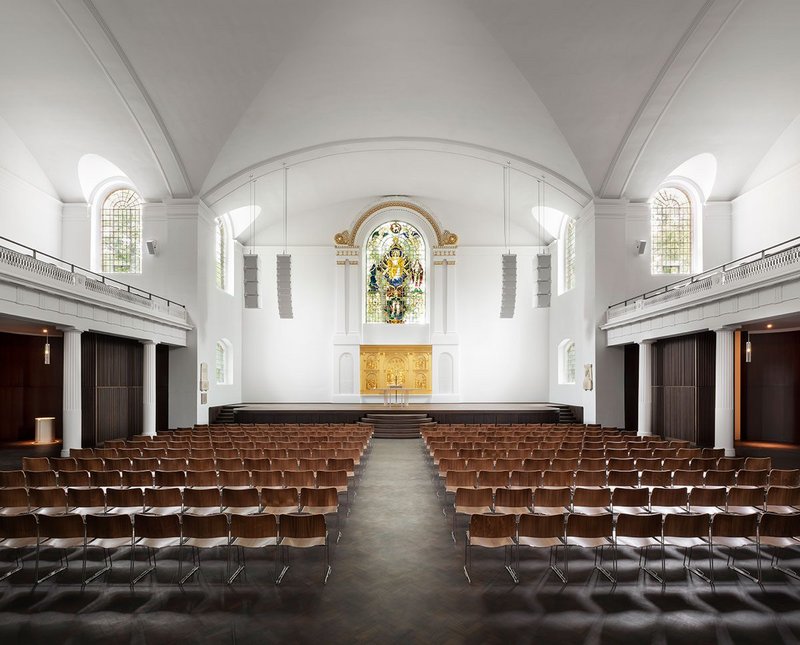 Everything about the website of Saint (the church formerly known as St John at Hackney) tells me to expect a mecca for hipster Christians: the award-winning branding and merchandise by the London studio OMSE (the Saint homepage features an OMSE-designed hoodie); the affiliated microbrewery which supplies beer in OMSE-designed cans; a parent and toddler group called Hey Baby; and the unusually youthful crowd populating the photos, promises twentysomething east London ‘cool’. But this recently refurbished church – the product of a collaboration between John Pawson and long-established church architect Thomas Ford & Partners and John Pawson – proves to be a much more sophisticated enterprise.

St John at Hackney has, for some years, served the dual functions of liturgical space and popular concert venue (hosting big names such as Coldplay, Ed Sheeran and Robbie Williams) so it’s perhaps not surprising that the site was selected by the Anglican Diocese of London as the home of Saint (something between a concept and a physical place) which has now subsumed an additional four east London parishes. The worshipping community, led by the Reverend Al Gordon, comes from all over London and is part of the Holy Trinity Brompton family, which, as well as delivering lively evangelical services and the Alpha course, also specialises in restoring historic urban churches.

This reinvigorated church is surely the jewel in Holy Trinity Brompton’s crown – and it should be. The refurbishment and restoration has, so far, cost around £6 million and unquestionably benefits from the glamour that John Pawson brings to the project (the practice’s first UK church). The seductive publicity photographs focus on the sleek white interior, the radiant gold reredos and the beautifully crafted oak panelling. But the refurbishment is more than just a glossy veneer; it is an intelligent, sensitive and serious scheme. Behind the immaculate minimalism, the architects worked together to stabilise the structure, restore the original fabric, rationalise the space, reinstate the original layout and design a highly efficient infrastructure to conceal the services and allow the building to function flawlessly. Pawson is the big name in this scheme – the practice must surely have been selected by Gordon as much for publicity as quality – but the groundwork was laid by Thomas Ford & Partners and it’s very clear that this is the work of both architects.

Nevertheless, Pawson is the headline and it would be tempting to say that the interior is simply more minimalism – it clearly does share more than a few strands of DNA with previous projects by the practice, such as St Moritz, Augsburg (a church interior that is an even whiter shade of pale than this one). But John Pawson associate architect Stefan Dold tells me that the objective was to create something that was sensitive to the 1792 James Spiller design, and the new space certainly does capture the expansive, airy low-church spirit of London’s Georgian churches. In doing this, however, the architects had to completely strip out the Festival of Britain interior and erase any trace of the 1950s colour scheme that had remained intact. While it wasn’t as impressive as similar 1950s interiors, such as St John’s, Waterloo (restored by Thomas Ford and Partners as the Festival of Britain church), I confess I flinched a little at seeing NF Cachemaille-Day’s pulpit auctioned off on a church antiques website.

Thomas Ford partner Clive England shows me around the refurbishment, which completed at the end of 2020 and has opened for worship sporadically since, formally reopening for concerts at the end of May. As we enter, we are greeted by two screens either side of the entrance, bearing the OMSE-designed logo and showing a selection of video stings, featuring the (largely) young faces of the congregation. Inside, the visually arresting, beautifully lit space has been stripped back and opened up under the gallery, which had been closed off in the 1950s reordering by screens concealing community spaces.

The new layout returns the space to its original Greek Cross plan – a design choice that feels absolutely right. Under the galleries, the walls are panelled in dark oak and a collection of war memorials has been moved and reset within the panels. This is visually effective and respectful – indeed, the colour of the memorials established the palette for the panelling. The reredos and surrounding text (the Creed, the Lord’s Prayer and the Commandments) have been regilded and lit so that they glow. The altar sits on a large stage, which doubles up as a chancel for formal worship. The steps at the front are ingeniously designed, as England demonstrates, to pivot and tuck under the stage during performances, thus opening up space for both a seated and standing audience. Suspended above the stage are two immense speakers (part of the ‘state-of-the-art PA system’) which, one imagines, serve not just gigs and concerts but also the kind of dynamic services that this particular branch of the Church of England offers.

The church now boasts two fonts. The original has been moved into a closed section of the narthex which houses also houses some medieval and Tudor memorials removed for safekeeping from the neighbouring St Augustine’s Tower. The new, simple font, designed by Pawson, is set in front of a vertical slice of light penetrating the dark oak paneling. The whole is very appealing. Pawson also designed a new altar, lectern and processional cross, which is appropriate as the originals would, frankly, have looked weird in this cucumber-cool space. Attention has been paid to every tiny detail – the smoke detectors set into the vaulted 1950s ceiling are so tiny they are almost invisible and even the toilet signs, imported from Italy, look like miniature works of art.

St John at Hackney’s press release emphasises that this is a ‘cathedral of creativity’ which, in the words of the reverend, will be ‘playing its part in a spiritual, social and cultural renaissance in east London and beyond’. The cultural part, at least, doesn’t seem unreasonable. In addition to its function as a music venue and its perfectly tuned, elegant decor, the church features an art installation, set to be unveiled later this year, by the celebrated set-designer Es Devlin (known for her work with Kanye West and Beyonce). This is her first permanent artwork and the commission reflects the growing role of churches as patrons of contemporary art.

This impressive church seems, on the surface, to buck the trend of dwindling congregations and redundant churches, which raises a question about budgets. It’s clear that the traditional fundraising route – the weekly circulation of a collection plate – could never have generated the kind of money required for this kind of scheme. Instead of relying on donations, the church augmented a National Lottery Heritage Fund grant by working with the developer Thornsett, which has delivered similar schemes across London, building residential units on church land.

In the case of St John at Hackney, the community facilities, which were initially intended to be incorporated within the church building, are now situated in the nearby housing development, Hackney Gardens. This had the dual advantages of freeing up space within the church and also allowing the developer to offset the community buildings against affordable housing and maximise its return. This is a canny business model that has enabled a number of churches to complete award-winning schemes that would, hitherto, have been inconceivable. It has also attracted growing numbers of high-profile architects, keen to apply their skills to something with more creative scope than residential and commercial projects. But it’s not a universally popular strategy and it sits somewhat awkwardly with the Church of England’s recent recommendations set out in its Coming Home report on the housing crisis. There is no doubt that St John at Hackney will continue its important charitable mission within the community (particularly focusing on the homeless) but whether this sumptuous church will function, as the Bishop of London hopes, as ‘a vibrant community hub’ for locals rather than worshippers and concertgoers, only time will tell.

The scheme is not yet complete. England tells me that repairs to the roof remain to be finished. This is, of course, vital not only in stabilising the structure but also for the interior design scheme – any water ingress will stain the vast expanse of white ceiling that draws the entire aesthetic project together. To raise the money, Gordon is currently on what medieval monks used to call a begging tour – nowadays, of course, this is done via social media and slick promos but there is something reassuringly old-fashioned about the church roof appeal. For all of the transformations in worship, demographics, style and economics that Saint captures, some things will probably be with us till the end.