As the rest of the country tightens its belt, Cambridge is building a 3,000-home academic quarter to protect this famous city’s world-leading university. The Syndicate got green belt land released, set design aspirations high and is controlling its architects to avoid a design menagerie. Jan-Carlos Kucharek dropped in to see them 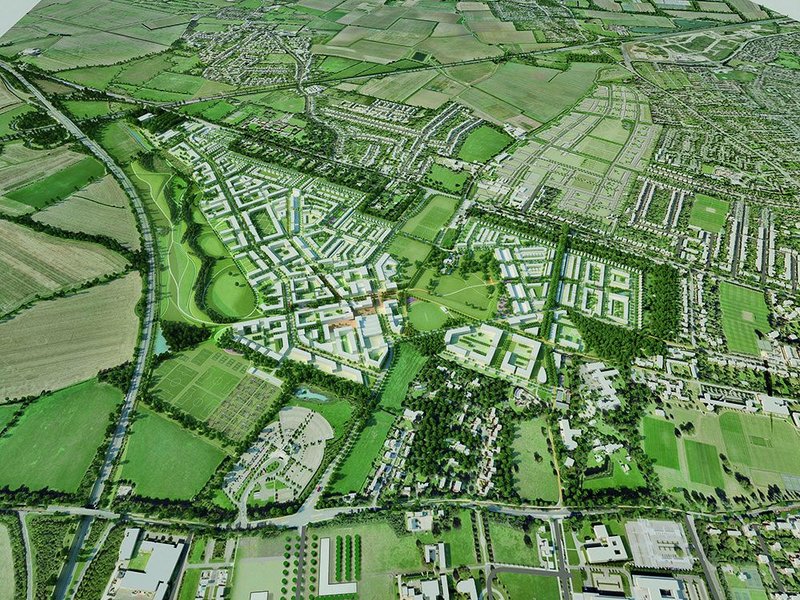 You’d have thought the City of Cambridge would have the notion of uncontrolled growth, and how to prevent it, firmly in hand. After all, it was the University’s Dr Alan Howard who in the 1970s created the eponymous low carb, high protein diet to reduce those waistline inches. But ironically, it’s the constricting effects of ‘belt-tightening’ that both university and city are now trying to shake off, with the city’s sacrosanct Holford Plan now being called into question.

Formulated in 1950, the plan aimed to maintain the city’s special character by restricting growth to 100,000 people within its green belt. With the planning relaxations of the 1969 Mott report came the ‘Cambridge Phenomenon’ of promoting high tech industry via the university, and housing demand rose. It turns out that Holford got his calculations right – in 2001 the population just tipped over into six figures, but there was a price to pay. With pressure from new residents and students alike, house prices and rents rocketed, and people jumped the green belt to Cambridge’s satellite villages, giving rise to today’s severe city centre traffic congestion as nearly 40,000 people a day commute in.

In 2001 the Cambridge Futures consultation was set up to address the implications of this and to look at sustainable development options for the city, its conclusions feeding into its 2003 and 2006 Structural Plans. The consultation provoked a reappraisal of green belt policy to try and cope with the city’s future need for over 12,500 new homes – resulting in the targeted release of major tracts of green belt land ring fencing the old city centre (see RIBAJ December 2011).

The university followed suit and in 2008 argued successfully for the release of its own green belt land to create a whole new city quarter – the North West Cambridge masterplan, which received outline planning permission last month. This is a major city extension – 140ha will be developed to create a mixed-use community intended to meet the future academic and residential needs of a university that, along with Oxford, has carved a reputation for commissioning works by some of Britain’s best 20th century architects. This development is to be no different. Divided into seven lots, it is to be spread over two construction phases, each headed by a different architect team, with a roll-call of big names – Stirling Prize winners David Chipperfield and Wilkinson Eyre, and Dutch practice Mecanoo. But there are also smaller firms involved – Cottrell and Vermeulen, Sarah Wigglesworth, AOC, Muma and local firms Mole Architects and RH Partnership. North West Cambridge project director Roger Taylor hopes it will be a model development, whose design aspirations for its own buildings will act as the benchmark for developer-led housing following in its wake.

Taylor outlines the necessity of the North West Cambridge development by answering his own question. ‘Why are we doing it? Because for centuries Cambridge has been a world leading centre of academic research. To remain so it needs to attract the best research students, doctoral and post-doctorate staff, and being a small city, accommodation has always been a major constraint.’ Taylor explains that in 2008 the County Council was asked to release its 140ha site to create 1,500 keyworker homes for university staff (the 50% social housing component), student accommodation for 2,000 postgraduates, 50,000m2 of academic facilities, 100,000m2 of research and development space and communal facilities. To ensure that it reads as a new city quarter rather than merely an academic campus, over the next 10 years the £1 billion development will be interspersed by 1,500 developer-built homes for market sale, a primary school, public square and 30ha of open parkland on the western fringe of the site. ‘With 3,000 new homes we see an actual resident population of up to 6,500, with 2,000 student units possibly extending the city’s 100,000 capacity by a further 10 per cent,’ adds Taylor. ‘Its significant.’

But before the architects can get a handle on the programme and the brief for their individual lots, they need to get to grips with the nature of the client commissioning them, and Taylor admits he is but one head of a many-headed beast. The ‘Syndicate’ is the university body to whom the architects will submit designs. Set up expressly to deliver the North West Cambridge development, Taylor explains it is made up of highly experienced professionals from finance and property, has its own governance, finances and management, and reports first to the university’s Regent House and ultimately to the University Council. Chaired by Alexander Johnson of the university finance committee, deputy chair is Professor Jeremy Sanders, a chemist, pro-vice chancellor and the Syndicate’s most senior academic, liaising with the university’s influential academic staff. And while Taylor, previously a director at Taylor Wimpey and from the hard-nosed commercial world, comes across as a modernist, Sanders is a Fellow of Selwyn College, which recently commissioned classicist Demetri Porphyrios for its student accommodation – though he is also a fervent admirer of Stanton Williams’ Sainsbury Laboratory. It’s an eclectic critical arena for the masterplan’s architects.

Taylor says the Syndicate will not make value judgements in a vacuum, but will use the expert design, sustainability and economic panels set up to advise it. It has also appointed AECOM both as masterplanner and to help create the development’s design guidance – the local authority’s condition for the land release. This guidance covers Design Codes, a requirement setting the general planning principles of the design in terms of massing, density and granularity, and Design Guides which look at the specific lots in detail – even down to a materials palette. But while the former needs to be ratified by the local authority, the latter is a Syndicate document that drives the design strategy internally. ‘The LA wanted to see a level of control to the process,’ says Taylor. ‘The Design Codes make it easier for us or developers to achieve consent for reserved matters applications. It doesn’t mean the architects can’t propose other things, but they’d have to make a case for it.’ 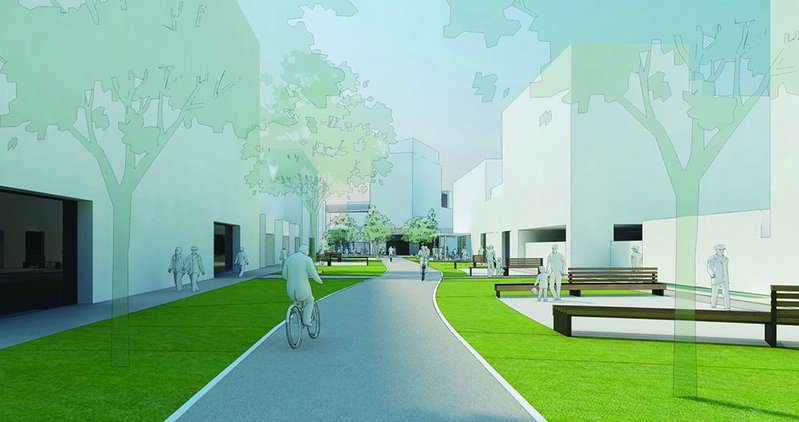 Gavin Heaghy, construction director for North West Cambridge who cut his teeth at Lend Lease’s Olympic Village, explains that there are other design auditing methods in place too, mainly design charettes allowing architects to see their designs relative to the lots going up around them. These bring the architects together and act as a forum for open and interactive discussion. ‘We ask them to take the brief and push it around, to see how designs come together in the public realm – and the workshops help us to resolve that,’ says Heaghy, arguing that the charettes scotch any suggestion that the masterplan will be a menagerie of architectural styles. ‘There have been press jibes about hearing the architects’ egos clashing from 100 miles away but the charettes are there to ensure it won’t be like that,’ he says. Taylor concurs, adding ‘There’ll be no ‘ta-da’ design moments – the workshops are a way of ensuring the Syndicate is acquainted with the design at every stage.’

This is all fair enough for the aspects of the design that the university controls, but what of the market housing that will be built out by developers? Taylor concedes that the idea was mooted that developers would have to choose from a university-selected shortlist, but that this was deemed too prescriptive. In the end it was felt the Design Codes and Guides in combination with the desirability of the development will be enough to rein in the worst profit-driven developer value engineering. ‘The message to developers is clearly that unless you meet the design aspirations with the right team that you won’t make the final shortlist,’ says Taylor, although Heaghy adds a caveat:  ‘A balance obviously needs to be struck so we’re not so demanding that we don’t attract developers but are robust enough to ensure that what they do remains in keeping with our design ideals.’

As for the individual designs, things seem to be very much based on first principles, although the Syndicate’s Professor Sanders has an idea about what those might be – for example inverting the traditional collegiate typology. ‘I see the designs based around collegiate forms but without the 10ft walls and only the one entrance – both we and the local authority want the masterplan site to have both permeability and porosity’. Certainly AECOM’s Design Guides for the individual lots have laid out fairly rigorous approaches to possible massing and densities, meaning architects, and more importantly private developers, shouldn’t stray too far from the path. Taylor hopes that setting out their preferred densities  will help avoid rampant profiteering on sites.

Whether the Syndicate likes it or not, comparison with Cambridge’s Stirling Prize-winning £80 million Accordia development will be unavoidable – its 50 dwellings per hectare density will be the same as some of those in the masterplan, although around the local centre they are looking at densities of up to 150dw/ha, calling for multi-storey, if low-rise, approaches. Taylor quotes developers as saying that they ‘wish the planners would talk about something other than Accordia’, but it’s a powerful precedent. He insists they are very different beasts, citing Accordia’s greater reliance on the car, something being actively discouraged at NW Cambridge – and nothing by the way of private gardens.

But the £400,000 2-bed apartments, and 4-bed family homes costing £1 million, highlight the city’s housing problems and show how rarefied Accordia’s design context actually is. By contrast, with lower per square foot costs and higher density, a range of uses, a broader social mix of residents and developers who have yet to engage with the Syndicate’s lofty aspirations, North West Cambridge’s architects face far more demanding challenges to address the city’s pressing housing needs. ‘There’s a problem with Cambridge – people suffer nosebleeds the minute they go above five storeys,’ quips Taylor during our conversation. In the pragmatics of designing a new city community at North West Cambridge, one hopes this as rarefied as things get.